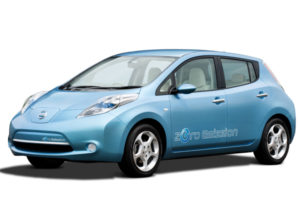 If You Demand Green, Extended Range Electric Wins Hands Down

Some Labour party backbench hack from the north east congratulated Prime Minister Gordon Brown for bribing Nissan with our money to build the Leaf battery-only car at the Sunderland plant.

The comment, at yesterday’s Prime Minister’s Questions, just reminded me of the fog of lies and exaggeration surrounding this push to force battery-only cars on us.

Firstly, the hack – Fraser Kemp (Labour, Houghton and Washington East) talked about these “zero emission” cars, when in fact they are mainly fuelled by electricity generated by coal-burning power stations. This canard was repeated by Brown. Nissan of Japan and its affiliate Renault of France routinely parrot this emissions free lie when talking about their battery-only cars. It’s not surprising that politicians and companies get away with nonsense like this, when mainstream newspapers with gullible reporters simply repeat the mantra without question. The Financial Times, in a news item about the Nissan deal, said this.

“The consumer market for all-electric cars is in its infancy but pressure to cut carbon emissions is driving global development of zero-emission (my italics) technology,” said the FT’s Chris Tighe.

Labour hack Kemp asked Brown for more investment in infrastructure to ensure people can switch to electric cars. Brown said 50,000 cars will be produced every year by the Sunderland plant. More Leafs – up to 500,000 – will be made in Japan and the U.S.

What Brown didn’t say was that there are severe drawbacks to buying these cars which will move off dealer lots only if they are helped by huge taxpayer subsidies (£20.7 million initially from us to build the plant, and €220 million from the E.U., er that’s us too). The batteries are eye-wateringly expensive – about £10,000 each when I last looked. And they don’t work very well (see my Electric Mini road-test). The range seems to be variable. You can start being promised up to 100 miles, but changing conditions will cripple this.

Guaranteed to fail
If Nissan “sells” 500,000 Leafs a year, I can almost guarantee one thing. Each car will fail to reach its destination at least once a year. Sure, if you drive a set, flat route every day in the same conditions with only one person on board never driving at more than 40 mph, you will always arrive with plenty of juice to spare. But stray on to a motorway, or overtake up a hill, or offer a lift to someone chubby, and you will watch the power disappearing. You will be marooned miles from home. If you’re lucky you might just make it, resembling a wounded milk-float, barely moving, causing massive traffic jams and generating an epidemic of road rage.

The FT’s Tighe reported Nissan claims for the Leaf without question. He said the Leaf will have 5 seats, an 80k electric motor which charges 80 per cent in under 30 minutes, a range of 100 miles and a top speed of more than 90 mph. Unfortunately for Nissan, seating five will drastically cut the range, doing 90 mph will drastically cut the range, refuelling in under 30 minutes will quickly destroy the battery.

Governments picking business winners are more often than not a waste of time and our money. As someone once said, if losers pick winners the chances of success are small. And you have to ask yourselves, if the prospects are so good, why aren’t banks or investors rushing to put their money in?

French subsidies
Why would anyone buy a battery car guaranteed to strand you miles from home, when at the same time you could go for an extended range electric vehicle like the Chevrolet Volt/Opel Ampera with up to 40 miles of battery only range, and a total of maybe 300 miles using the internal combustion engine which recharges the battery?

It truly is a no-brainer.

But Renault-Nissan is pursuing this goal, not least because the French part of the affiliation is set to receive massive injections of French taxpayer’s money in subsidies for buying and running these cars.

When Leafs go on sale in 2011 (foreign made ones will appear here first) and the Nissan salesman corners you in the showroom, at least make sure that as well as all the subsidies, you also nail down the best Road Rescue Service money can buy. Come to think of it, you’d be better off leaving the Leaf at home, and simply using Road Rescue to get you there and back.