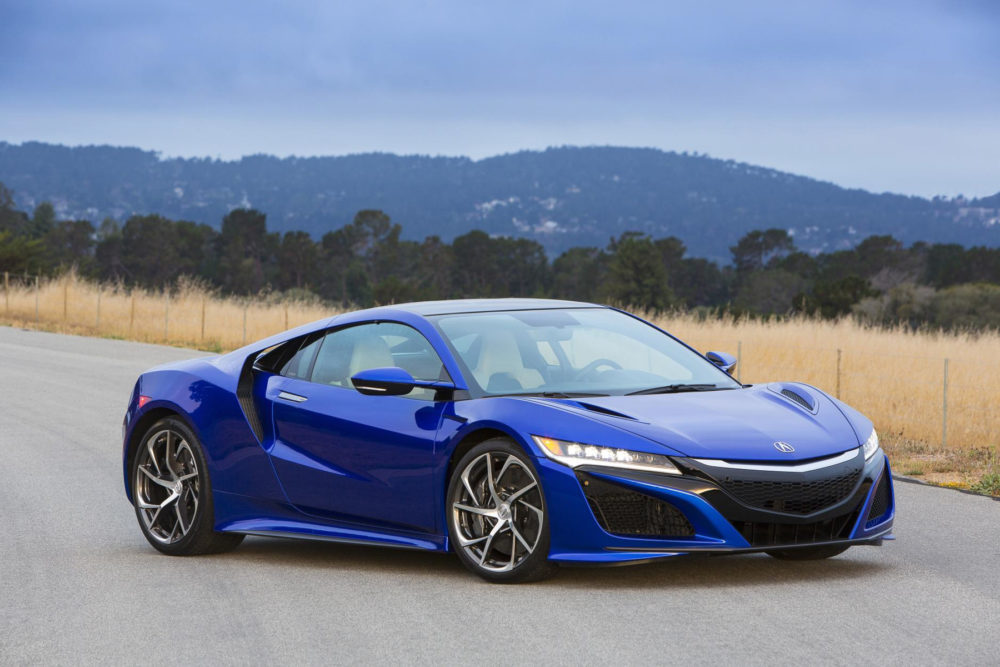 Imagine the lottery has finally paid off and you have upwards of $200,000 to spend on a lightning fast supercar that will thrill you and also show the world you are a person of substance.

You could go for a Ferrari, a Lamborghini, a McLaren, an Aston Martin or a Porsche maybe. There are top of the range Mercedes, BMWs and Audis. But a Honda, even it was disguised as an Acura?

That’s the mountain that the NSX has to climb before persuading potential buyers to give it a home. To do this it has to be at least as beautiful as the competition, ridiculously fast, and also show the traditional competition a thing or two about technology which puts it at the head of the pack. A bonus would be that it is so revered by buyers in this heady world that perhaps in a few years time it will become an investment and actually gain in value.

To be fair to Honda and its upmarket Acura subsidiary, it is no stranger to this game. Its original NSX, which made its debut in 1989, shook up the supercar world with its dramatic styling, performance and innovative engineering. The latest iteration builds on this reputation. It has fabulously beautiful styling (in my opinion), and a power-plant that puts it at the forefront of engineering and which includes the buzzword “electric”.

The NSX’s six-cylinder 3.5 liter gasoline engine produces 500 hp, but add three electric motors and it can boast 580 hp. The 0-60 sprint comes up in a 3.3 second blur, and the standing quarter mile in 11.4 seconds. The gasoline engine is located in the middle, just behind the driver’s head. There’s an electric motor attached to the engine. Then there are electric motors driving the two front wheels which also mean four-wheel drive. So this is a gasoline-electric hybrid. The electric power helps the traditional engine to provide more power while at the upper edges of performance, but also limits fuel consumption in everyday use.  In Europe, Honda claims the NSX will get the equivalent of 23.5 miles per U.S. gallon. I managed 24.1 miles per U.S. gallon.

Acura
Honda and Acura of course spare no hyperbole in their publicity claims.

“It is the most intuitive and advanced sports hybrid power unit in the supercar segment. The innovative new multi-material body with world-first material applications and construction processes allows light weight with increased strength. The NSX has astonishing dynamic performance,” Honda said.

So how will it do in the marketplace?

“In terms of volumes, given the price point, these are rather limited, and production of much more than 1,000 units this year would be unlikely. For one, this is a classic halo car, with Acura looking for the model to boost the brand image, rather than necessarily drive large volume growth. Added to that, at a relatively high price point and there a whole lot of high-end sports cars vying for relatively few wealthy customers, competition is fierce. To that end, volume comparisons to the likes of McLarens, Lamborghinis, Ferraris are not wholly unfavorable, but concern might be that sales could run out of steam fairly quickly – often models in this segment see a rapid uptick in sales followed by a fairly rapid decline,” Poskitt said.

IHS Markit agrees with the initial sales forecast, but only expects a gradual slackening of sales. This year global NSX sales should hit about 1,050, its first full year, gradually decline to 950 next year, 840 in 2019 and slipping down to 730 by 2022. 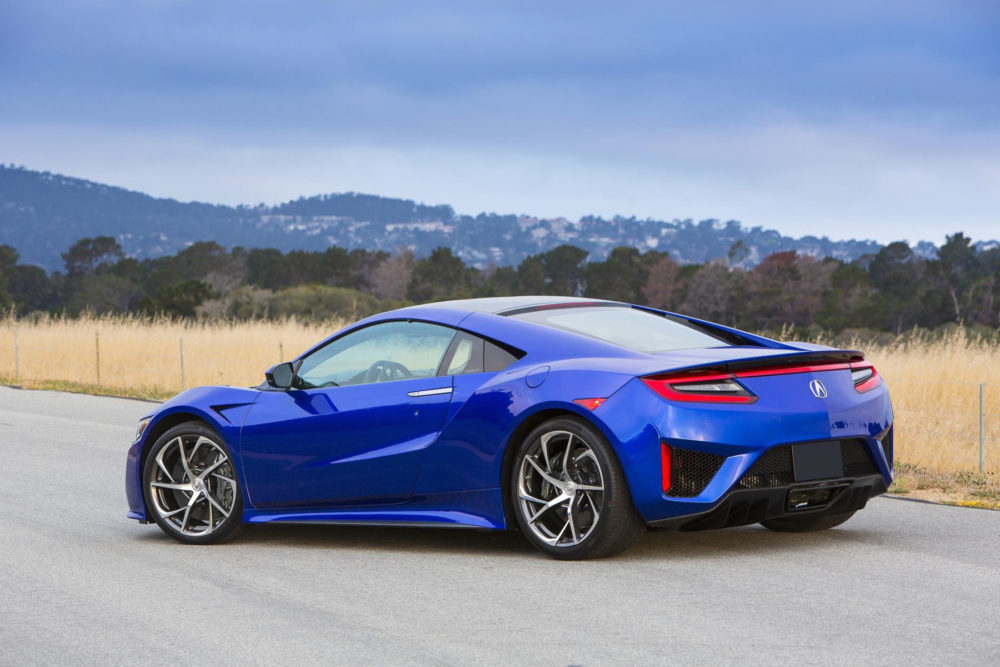 “This time the notable rivals are the Ferrari 488 and Audi R8, and maybe the Porsche 911 turbo but these cars are very different in technology and mechanical layout than the NSX; it’s the only hybrid supercar in that category. The hybrid, the way it feels and aids the engine, there’s been a lot of positive response. I think the NSX has a special place still in enthusiasts’ hearts and it is an incredible piece of kit,” Urquhart said.

Second hand values look strong and this points to it being a good long term investment as well, he said.

“There will be more and more electrification in super cars. This not only boosts their performance but is a way of making them more socially acceptable as well. Eventually pure electric will be the norm,” Urquhart said.

Ivan Drury, Boulder, Colorado-based analyst with automotive industry experts Edmunds, said NSX sales weren’t shaping up to be as good as Honda wanted, but the new model, particularly in the way it looks, had lived up to the pre-launch hype. Competition is fierce

“Acura isn’t selling as many as it wanted, but nobody in that segment is going to move as much metal as they originally planned,” Drury said.

Drury thought Acura wanted to sell about 800 a year in the U.S., but this year though August had only sold getting on for 330. He agreed going electric not only boosted image, but added to performance too.

“Internal combustion engines sound great and are a lot of fun but adding electrification boosts the environmental case and gives better performance too. It adds another level of driving dynamics,” Drury said.

I can attest to that.

Ear-shattering
I spent a few days driving the NSX, sold in Europe with the Honda badge, and the electric mode gives you quiet starting and silent takeoffs if you’re ambling along. You can opt for a more ear-shattering reaction when you pres the start button to remind the neighbours of your good fortune. After pressing the starter there’s a button between you and the passenger to engage drive. You can select various modes, including “track” or Launch Mode Control.

As you quietly drive along country roads you can hear the technology murmuring behind you as the nine-speed gearbox does its business. The ride is harsh, but that’s no surprise. The cockpit-like cabin wraps around you. It’s a civilised cinch to drive down to the shops. The interior trim doesn’t look as though it is from a $200,000 machine though. You won’t get a golf bag in the small trunk, but the clubs themselves will fit in. No cup holders? There’s a plastic tray in the glove compartment.

But if you can find an empty road and floor the accelerator its personality changes and the murmur becomes a startling, high pitched roar as the car leaps forward. As illegal speeds appear very quickly, you will be searching for a track to find out how fast it really is. The handling is amazingly precise and the stick like glue road-holding more go-cart than car.

Can a Ferrari, Lamborghini or McLaren be better than this? 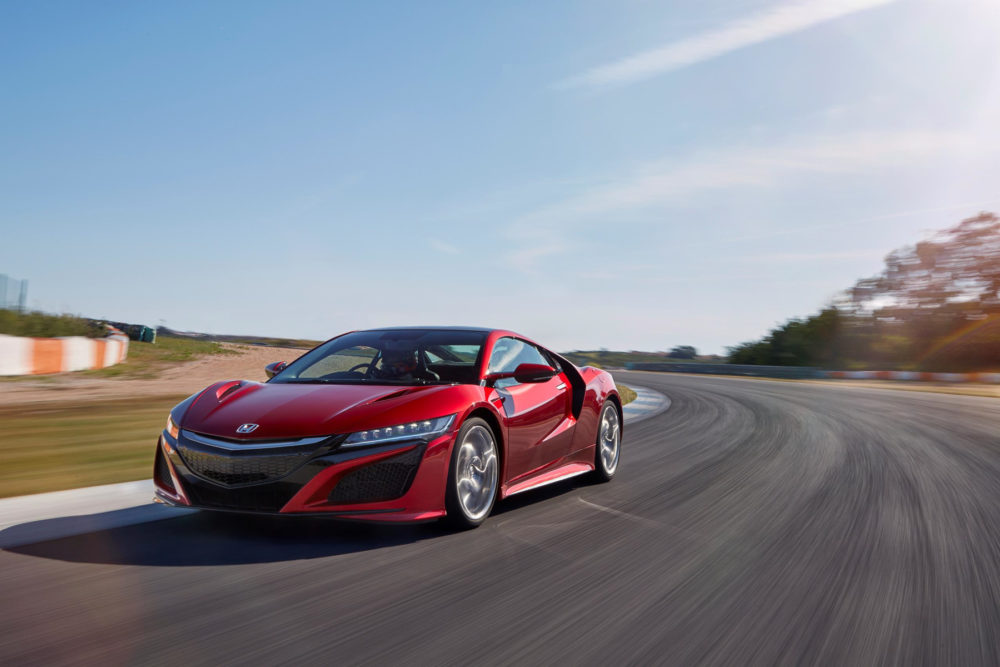