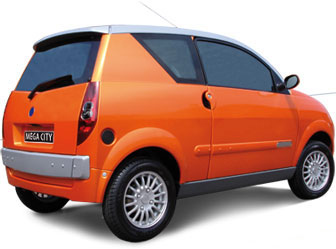 Keeps Up With Traffic, Just; Wait For Next Technology Advance.
Pricey To Buy/Cheap To Run, Questionable Safety, Inadequate Poke.

Guaranteed To Make You Fell Smugger Than A Prius Driver.
** out of 5

I’ve been driving the future, and it needs work.
With all the talk about electric cars replacing petrol and diesel engines, it seemed a good time to find out just what these new cars are like. I drove the NICE (Not Internal Combustion Engine) Mega City through central London with traffic at its peak and this little car is powered just by batteries.

Not one of your mythical lithium ion batteries which will miraculously emerge late in 2010, just in time to power the Chevrolet Volt plug-in hybrid off the GM production line and 40 miles at highway speeds before expiring. The Mega City is powered by old technology lead acid batteries.

Switch on, engage the automatic gearbox and off you go. The car zooms away from a standing start to 30 mph very quickly, eerily and impressively, but that’s about all the performance the car has. That’s fine in central London during the rush hour – 30 mph keeps up with the traffic without any problems. But if you need to go faster, forget it. The Mega City picks up speed over 30 mph as you slide down a gradient. It eventually reaches 40 mph, just.

How far will it really go? 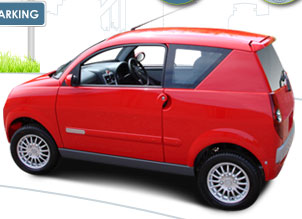 NICE says the Mega City has a range of a maximum 50 miles on a single charge as long as you drive on level ground and don’t make it accelerate very hard. I drove for about 20 miles so I didn’t get the chance to challenge that claim. It takes at least 8 hours to recharge the battery. NICE offers journalists drives lasting a couple of hours from its headquarters in London, so when you get there the battery is charged. There’s no chance to find out how it would be living with this car, how far it can really go on a full “tank”, how much the range is debilitated by aggressive driving, or how long it really takes to recharge the thing.

I suspect this means many cases of being stranded on an empty battery, miles from anywhere, are avoided by this policy. Also, bouts of road-rage generated by a cute little car not being able to keep up with the traffic flow have also been at least delayed.

In central London, there are power points provided by the city, so when you park with the free electric car concession, you can also fill up with power for nothing. This perk is unlikely to survive if battery cars become popular.

Liability in a 40 zone
The Mega City is likely to become a liability as soon as you reach a 40 mph area. The brakes aren’t assisted so you have to be ready to use your physical power in an emergency stop. The suspension is thumpy and bouncy. The steering is woolly and lax. The engine makes a soft, whirring sound as you cruise along, but makes lots of groaning noises at low speeds. The automatic transmission doesn’t want to creep forward like regular cars, and will roll back on hills if you aren’t careful.

The NICE Mega City is made by Aixam Mega of France. It is pricey, costing around £11,500-€14,600. But it is cheap to run. According to NICE it costs just 2 pence a mile. You can have 2 or 4 seats. It has 3 doors and is made with plastic over an aluminium frame. You can opt for the full range of creature comforts including MP3 connections, sat-nav, and Bluetooth. Standard equipment includes electric windows, remote central locking, and parking sensors. Batteries are maintenance free and covered by the 2-year manufacturer’s warranty.

The car is tiny but looks cute. Inside, it feels like a real car. The quality is very mixed though.  Some parts of the interior seem top class, others a bit shoddy. The seats aren’t great; I felt as though I was perched on them rather than being enveloped by them. The instruments are simple and straightforward. There’s a little gauge to show how much juice is left in the batteries. There’s another switch which says Speed – High or Low. I was surprised to learn later that even though the car felt gutless, I was in “High” mode. The ceiling was low and too close to my head.

Running costs are low, particularly if you can fill up for free courtesy of City Hall.

Safe if you hit a Quadracycle
That’s not very reassuring. It doesn’t sound as though it will help you out much in a crash, unless you run into another quadracycle, whatever that is.

“Like all models produced by AIXAM, the Mega City has been subjected to crash tests at representative speeds,” it says.

No word on how many stars out of 5 were awarded. 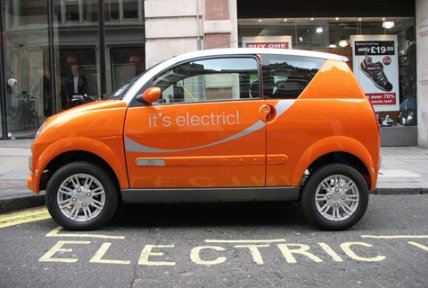 NICE, listing the advantages of the Mega City, says it is congestion charge exempt (in London and presumably other British cities that sign up to this idea), road tax free, zero emissions – no CO2, no air quality pollutants, no tailpipe stuff – (that can’t be right, surely the electricity comes mainly from coal fired power stations?) almost 100% recyclable, crash tested, lightweight and quiet.

I wouldn’t argue about the last two.

Chevy Volt, come on down!
NICE concedes that its little car is not a high-mileage cruiser, or the winner of a group car test that brags about 0-60 mph times. “The NICE Mega City is a low-cost, clean and convenient transport solution for modern city life,” says the company

The Mega City and similar battery cars like the G-Wiz and Think! are really only for trendy early adopters who can live with its obvious limitations. Surely, the Chevy Volt will be better than this?