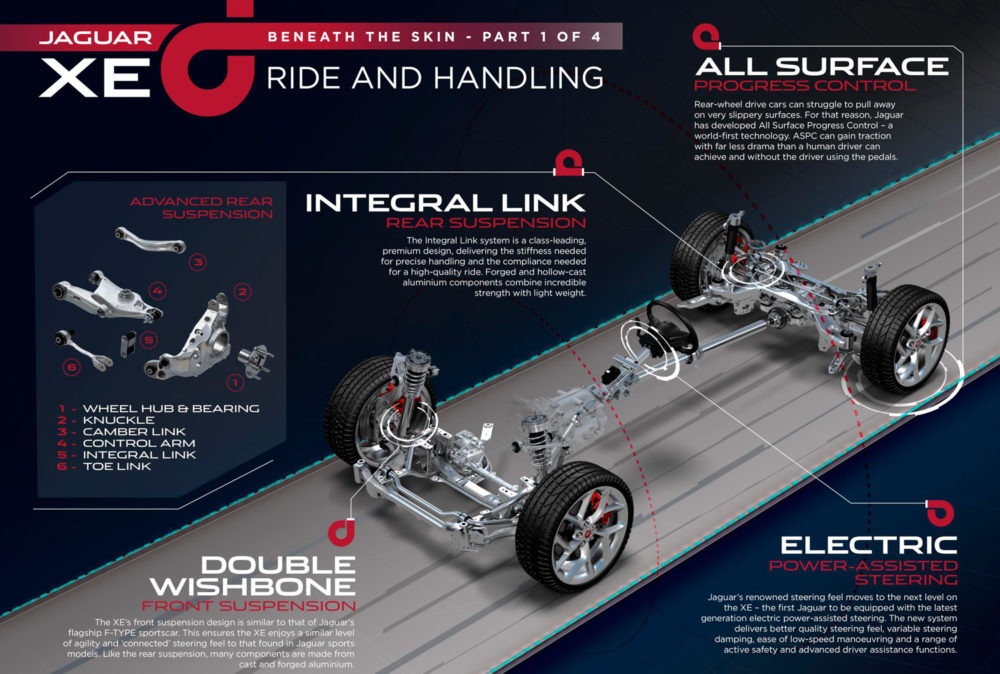 The new small Jaguar XE will feature light-weight aluminum construction in the drive to save fuel and help Jaguar Land Rover with the smaller vehicles it needs to meet ever tougher government emissions rules.

Jaguar said it will unveil the new car, which will compete with the class-leading BMW 3 series, in London on September 8, and parade it in front of public for the first time at the Paris Car Show in October..

Jaguar has released the first of a series of four diagrams of the underpinnings and engineering technology of the car, which it plans to launch in Europe next year, and in the U.S. a year later. Expect subsequent ones to show plans for a gasoline-electric or a diesel-electric hybrid, more small four-cylinder turbo-charged engines, and maybe eventually, a battery-only version.

According to investment bank Barclays Equity Research, Jaguar Land Rover, owned by Tata of India, faces a huge challenge to meet European fuel rules in 2020 because of the many gas-guzzling SUVs and big cars in its portfolio.

Barclays said this translates into between 15 and 16 per cent of revenues.

“In our view, the higher capital outlay on account of emission norm changes poses a risk to the cash flows at JLR,” Barclays said.

In a statement, Jaguar said the new XE is built around a new, aluminum-intensive architecture.

“Jaguar will bring levels of innovation never seen before in this segment – with its lightweight construction expertise and sophisticated chassis technology in addition to the new family of Ingenium engines,” Jaguar said.

Many components of the integral link suspension have been forged or hollow-cast in aluminum. These are the optimum production techniques to produce a strong, lightweight solution, it said. The advanced suspension design is based on Jaguar’s flagship F-TYPE sports car.

Jaguar will be the first JLR vehicle to use the Ingenium four-cylinder gasoline and diesel engines, the first motors to be designed and built in-house since Tata bought the company from Ford in 2008. Previously, most JLR engines came from Ford.

If JLR baulks at the hurdles to producing smaller, fuel efficient cars it may be forced to merge with another company. Some kind of alliance would allow JLR to meet new fuel rules by averaging down its fuel consumption by including them with a manufacturer of small cars like Fiat, analyst say. In extremis, JLR theoretically could be forced into a merger if there was no other way to meet CO2 rules. More likely would be a pricing policy to raise prices a little to take care of any fines.

Longer term, JLR volume needs to reach annual sales of one million, with perhaps a factory in the U.S., in addition to plants in China, and mooted ones in Saudi Arabia, Brazil or Russia.