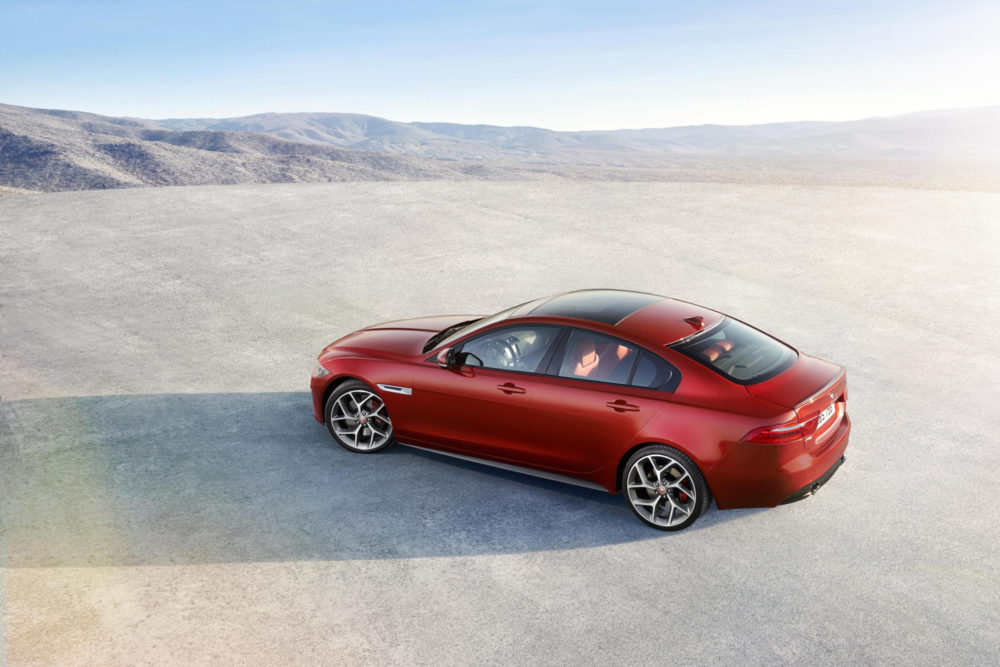 “Speth was in charge of product planning of the BMW 3 Series at BMW in the 1970s, so he knows what the customer wants”.

Jaguar’s new small luxury sedan, the XE, has been assigned Mission Impossible. Jaguar, now part of British-based and Tata of India owned Jaguar Land Rover (JLR), will have to win sales with the new car from the all-conquering BMW 3-series, Mercedes C class and Audi A4.

Jaguar has chronic losing form trying to unseat the Germans in this sector. In 2001 it launched the ill-fated X-Type which slowly crashed and burned, losing then current owner Ford Motor Co about $2.3 billion. The X-type was seen as bland and too closely linked with a mass market product, the Ford Mondeo.

Despite this previous failure, the new Jaguar XE is expect to succeed against the Germans. In London on September 8 the car will be unveiled, then paraded in front of the public for the first time at the Paris Car Show in October. If, when you see the XE for the first time you don’t gasp with admiration and lust, then there’s a good chance that this one will fail too, so expect it to look terrific.

Jaguar has been cranking up its public relations machine in the months before the launch, and teasing the public with snippets of information. We learn that the XE will feature a light-weight aluminum body and components to save fuel. Early versions will have a new high-tech 4-cylinder “Ingenium” gasoline and diesel engines. Later ones may offer gasoline or diesel electric hybrids. The suspension is inherited from Jaguar’s flagship F-type sports car. Information connectivity is a big priority for Jaguar and it talks of the XE being a moving Wi-Fi machine. There’s a laser headup-display.

Thrilling performance
“The XE combines thrilling performance, agile handling and precise, responsive steering, with outstanding levels of refinement. Jaguar will bring levels of innovation never seen before in this segment – with its lightweight construction expertise and sophisticated chassis technology in addition to the new family of Ingenium engines,” Jaguar said.

That hype is probably close to what Jaguar said in 2001 without the “Ingenium” reference, so why should it succeed this time? Apart from the huge amount of money to invest in new products provided by the parent company Tata, JLR has lured a team of German managers to run the operation, including CEO Ralf Speth.

“Up to now, the recovery of Jaguar under Mr Speth’s governance is a real success story. And it will go on I’m sure. Mr Speth was in charge of product planning of the BMW 3 Series at BMW in the 1970s, so he knows what the customer wants in this segment. Customers want image, timeless styling and high quality. Price is not decisive. Jaguar will become the biggest danger for BMW, Audi (and Mercedes),” said Helmut Becker, head of the Munich-based think tank IWK.

Most successful
According to the Center for Automotive Research (CAR) at the University of Duisberg-Essen, JLR has been the most successful automotive company in the past four years. Last year it sold 425,000 cars around the world, and by the end of 2014 will have increased sales by 214 per cent since 2010. JLR earned an 11 per cent return on sales last year, making it more profitable than Daimler’s Mercedes and on a par with BMW and Audi, which is owned by Volkswagen, said CAR.

CAR’s Professor Ferdinand Dudenhoeffer said the new XE will be very competitive with BMW, Audi and Mercedes. Audi in particular may feel the brunt of the XE’s arrival.

“It is designed by BMW engineering people who know the way to design sporty cars very well, with their focus on quality, drivability and sportiness which brings together an interesting package,” Dudenhoeffer said.

Where will it win sales?

“Jaguar doesn’t need to conquer all its sales from the Germans, but 20 to 25 per cent will come from German car makers and the rest from market growth. If you are looking for vulnerability amongst the Germans, Audi is now showing weakness because it is falling behind with technology. There’s nothing new in materials like carbon fiber; nothing new as regards e-mobility and innovation. Just conventional cars with high quality, but that’s it. Audi is the most vulnerable in the next five years. Customers will step from Audi to other brands, where we are seeing a strong (product) performance at Mercedes, that will continue with successful new design and technology in the car. BMW has to find a way to help them renew their design a little bit, because that has become a little conservative,” Dudenhoeffer said.

Garel Rhys, emeritus professor of Motor Industry Economics and director for Automotive Industry Research at Cardiff Business School, is a little less ambitious with his forecasts, reckoning XE sales of between 110,000 and 115,000, with a total of about 250,000 annual Jaguar sales by the end of the decade. The XE will be priced in the middle of the BMW 3 series price range, but its looks are crucial.

“It has to look right and grab them (the customers) by the throat. It must be different from the Germans, not in a bland way but positive, based on the Jaguar heritage; sportiness must be in the DNA. Looks are going to be very important and must show it is not German,” Rhys said.

“The X-type was very bland. It looked like a three box saloon (sedan) made in Korea and it didn’t look premium, it was almost unbelievable in its ordinariness and seemed doomed from the start. And prices must be right, not at the bottom of the range, and won’t be out of line with the middle of the BMW price range,” Rhys said.

It will be a success.

Money and desire
“I think the challenge can be met. There are growth markets around the world and more and more people with the money and desire to buy these types of cars,” Rhys said.

Professor David Bailey of the Aston Business School shares the optimism for Jaguar and the XE, but warns about the strength of the competition.

“I’m optimistic for them. They’ve done well over the last five years, with an emphasis on design, improving quality and improving emissions. There’s lots of technology in the XE with the range of engines and aluminium construction, and design cues from the F-type. Jaguar is pitching it right, but it is going into the most competitive segment in the whole auto industry against the BMW 3 series, Mercedes C class and Audi A4,” Bailey said.

Bailey said that in its drive to cut emissions to meet tough government CO2 regulations, JLR is taking the “lightweighting” route, with aluminum, composites and very fuel efficient engines.

“Whether they go hybrid at any point is an open question, but they don’t seem to looking at (battery-only) electric cars,” Bailey said.

For JLR to succeed in the long-term, the XE, because of its relatively high volume, must be a winner. It is also crucial in providing the volume to pull down the company’s average fuel economy to meet new regulations in Europe, the U.S. and China. In this context, the Tata connection might be vital too, if the India side of the operation could provide small cars in Europe to lower the fuel use average.

Customers or accountants
If the XE fails, JLR might find itself vulnerable to a takeover, or worse. Are the Jaguar sales targets achievable?

“Yes they are,” said IWK’s Becker, who has faith in Speth’s leadership to make it work.

“As a CEO of a car company you should never forget this – “We have to build cars for the customers, not for the accountants”. That’s BMW’s philosophy. That’s also Jaguars and Mr Speths,” Becker said.