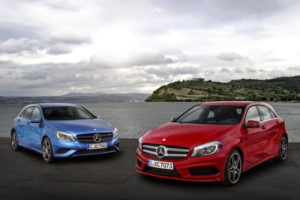 New Mercedes A class Will Shake Up BMW, Audi

“Mercedes has done a fabulous job with the styling. It’s a big step up in terms of styling. The previous ones were dreadfully dull but this one is a quantum leap”

German luxury car makers are investing heavily in new small vehicles, and investors are worrying that maybe, just maybe, they are being a bit too ambitious.

But many experts think big sales targets for the new Mercedes A class and the latest Audi A3 will be accomplished with relative ease. It is Europe’s mass car manufacturers which should be getting nervous.  BMW, Audi and Mercedes are moving relentlessly down market, eliminating what once were highly profitable sales for mass manufacturing companies like Renault and Peugeot of France, GM Europe’s Opel-Vauxhall and Ford Europe.

Deutsche Bank, in a recent report, pointed out that Mercedes-Benz plans to more than double small car production to some 750,000 a year by 2015, and it worried the expansion plans by the big three German luxury players might be on the greedy side.

That total includes about 300,000 new Mercedes A and B class vehicles, as well as another four models derived from these new cars, probably including a coupe/cabrio and a small SUV. The old Mercedes A and B class were not sold in America. Mercedes hasn’t yet confirmed that the new A class will go on sale in the U.S., but with the need to improve fuel efficiency drastically under Washington’s plans to raise average fuel economy to 54.5 miles per gallon by 2025, there would seem to be a clear case for selling this little car in America.

Despite what would seem a ready market around the world, Deutsche Bank is nervous.

“We fear that growth assumptions are too ambitious, which can be most visibly seen in Mercedes small car ambitions. We fear that the industry is betting on too much growth coming up, as combined segment plans by all players add to almost two million units in the segment, which would be around one third of today’s total global premium car sales, almost doubling from today’s level,” the report said.

Audi with its A3 and BMW’s 1 Series have dominated the small luxury sector, while Mercedes has competed rather half-heartedly until now with a range of small cars which failed to excite buyers. That has changed with the introduction of the all new Mercedes A class.

Tim Urquhart, senior analyst with IHS Automotive, reckons Mercedes will make big progress with its A class, not least because it is now a head-turner.

“Mercedes has done a really fabulous job with the styling (of the new Mercedes A class) and it has huge showroom appeal. It’s a big step up in terms of styling. The previous ones were dreadfully dull but this one is a quantum leap,” Urquhart said.

“This is hotting up to be a very vibrant sector with lots of new models from the big three players ramping up compact premium strategies. There’s lots of growth and profits as they get much more volume and new modular architectures will cut costs,” Urquhart said.

So-called “modular architecture” refers to car manufacturers plans to standardize more and more sections of cars which can be used to build a wider range of vehicles which look very different on the outside, but whose engines, suspensions and engineering generally have much in common on the inside.

Shake up
“Mercedes especially will be getting great economies of scale,” Urquhart said.

Jonathon Poskitt, Head of European Sales Forecasts for LMC Automotive, agrees that the new Mercedes A class will shake up the sector.

“The previous generation A class was not able to compete on a level playing field with the likes of the BMW 1 Series and Audi A3 because the styling was more like a (small people carrier) and left the market wide open for Audi and BMW to clean up. Mercedes has done the right thing and decided to take the A3 and 1 Series on directly. With the latter two having received evolutionary designs, they appear a little more conservative in the styling department from the fresh new A Class. So without doubt the A class will be much more competitive this time around,” Poskitt said.

Cadillac’s threat with its new small ATS model is aimed at the segment above, dominated now by the BMW 3 Series. Mass market players will be hurting though as the German luxury manufacturers invade sectors which used to make them fat profits, as cars like the Ford Mondeo, Opel-Vauxhall Insignia and big Renaults and Peugeots wilt under the German onslaught from above, and the Koreans Kia and Hyundai attack from below.

Prosper
Peter Schmidt, editor of fortnightly European newsletter Automotive Industry Data expects the A class sector as a whole to prosper, and to be dominated by the Germans for the foreseeable future. Any attempts to break into this market by new entrants will be futile. Mass car makers will be suffering too as once profitable sales are eliminated.

“Volume car manufacturers like Opel or Renault or Peugeot have more or less taken business away in the executive sector (Ford Mondeos, Opel Insignias) while small family cars like the Ford Focus and Opel Astra are having to compete with the Mercedes A class, and BMW 1 Series, Schmidt said.

Schmidt said that the power of German luxury brands will always win over more downmarket competition. And because of improvements in manufacturing personified by the latest “modular” technology, it is almost as cheap to make a Peugeot as a BMW.

One possible weakness in the plans of Audi, and to an extent BMW, is that they have been so confident of their success they are happy to produce unadventurous designs which look little different from the models they replace. Audi, a subsidiary of Volkswagen, Europe’s dominant car maker, has just launched its little A3, said to be all-new, but almost impossible to distinguish from its predecessor.

Not a problem, says Schmidt.

“The new A3 styling is not a mistake because it just follows the successful formula which hasn’t changed for at least a decade. Audi knows its client base and this explains its incredible success in sales and profits. Why divert from something that is a gold mine,” Schmidt said.

Schmidt reckons that the long-term future for the German premium makers centers on China, where consumers are said to be even more brand aware than Europeans and Americans. As far as he is concerned, any challenge to the Germans is bound to fizzle out.

Fate
“Look at the performance of (Toyota’s) Lexus in Europe. Despite an enviable reputation for quality and exclusivity, Lexus has not found success in Europe or even in China, where it has not managed to be mentioned in the same breath as Mercedes, Audi, BMW or Porsche. Even in its home market of Japan, Lexus hasn’t been a success. The same fate awaits Infiniti (owned by Nissan) and Honda’s Acura,” Schmidt said.

Schmidt is just as dismissive of recently announced plans by Renault to again try to move upmarket.

“Volvo (formerly owned by Ford, now in Chinese hands) tried hard but couldn’t do it. Neither could Peugeot. It is simply wishful thinking. It’s not that they can’t make great products, of course they can do that, but even if they made the best cars in the world, without the Audi, Porsche, BMW or Mercedes name on the front it will not sell,” Schmidt said.

Audi A3 review
GM Future In Jeopardy Unless It Dumps Opel, Report Says