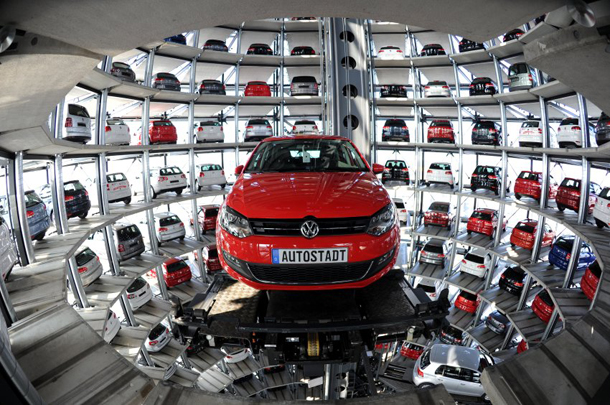 Stock markets may be crashing as investors panic, western economies totter on the brink of another recession, and the euro zone is close to collapse, but Germany and its premium car manufacturers sail serenely on.

European forecasters are scrambling to cut their forecast for car sales but all seem to add the caveat “not including BMW, Mercedes and Audi.”

During the last recession, the big three Germans were not immune from harm, but they took the opportunity to take some hard decisions to cut costs and plan for the future. They didn’t waste the crisis.

“You don’t ever want a crisis to go to waste; it’s an opportunity to do important things that you would otherwise avoid,” presidential chief of staff Rahm Emanuel famously said back in November 2008. Rahm wasn’t talking about the automobile industry but you get the idea.

Some big European manufacturers like Peugeot-Citroen and Renault of France failed to heed Emanuel’s advice, as each took on huge, $4 billion plus government loans to help tide them over the troubles. But these loans came with strict conditions: don’t fire anyone French, and don’t move factories to cheaper locations outside France. Result: necessary restructuring was delayed. Harsh decisions which would have paid huge dividends in future viability and profits were put off. This damage was aggravated by European government decisions to offer massive cash-for-clunkers subsidies, which simply pulled sales forward, putting the difficult decision day off a bit longer.

No secret
There is no secret about Europe’s biggest problem; overcapacity. Ford Of Europe CEO Stephen Odell recently said this had now reached about 35 percent, yet the only recent factory closure cut 2,500 jobs, when GM Europe shuttered its Antwerp, Belgium plant. The European automotive industry employs 2.3 million people directly and 10 million indirectly, according to the European Auto Manufacturers Association.

If global economies are going to plunge again into recession, it is the mass car manufacturers which will feel the heat first, not the upmarket Germans, said Bernstein Research auto analyst Max Warburton.

“When volumes do down, earnings go down. When volumes do down a lot, earnings collapse. More profitable companies like the Germans have more of a cushion before they lose money than the struggling companies like the French. Companies with conservative working capital structures (the Germans) would not burn much cash. Companies with aggressive working capital structures like Fiat of Italy and the French would see cash vaporize,” Warburton said.

Warburton took what he called these “handy” lessons from the 2008-2009 crisis.

Effectively insolvent
Peugeot-Citroen, Renault and Fiat suffered such severe working capital outflows in Q4 2008 that they were rendered effectively insolvent in just three months. Volkswagen of Germany did not have a single loss making quarter during the last crisis, while BMW and Daimler lost money for only two quarters. None of the three Germans burnt cash for more than a couple of quarters in the crisis – all ended up with stronger balance sheets at the end of 2009 then they had in 2007.

Boosted by big sales in China and a rebounding U.S. performance, BMW’s second quarter profit margin was a Ferrari/Porsche like 14.4 percent, while Volkswagen subsidiary Audi racked up 11.8 percent and Mercedes-Benz 10.7 percent. Analysts expect more of the same in 2011. But mass car manufacturers Peugeot-Citroen saw profits dive and warned it might make a loss in the second half. Renault’s first half operating profit fell nearly 20 percent, and it expects to struggle in the second half. Chrysler owner Fiat performed well in the first half, but rising debt spooked investors.

Forecasters are now cutting sales estimates for Western Europe, except for the Germans. Citigroup Global Markets cut its prediction for a small increase in sales for 2011 to a two percent fall to 12.7 million.

“Investors are likely to fall back on companies with strong top line growth, margins and balance sheets – the German manufacturers, and suppliers, rather than possible turnaround tomorrow companies like Peugeot, Renault and Fiat,” Unnithan said, while cutting profit estimates for the latter trio by between 13 and 14 percent.

J.D.Power cut its forecast for West European sales to a fall of 1.1 percent from a previous merely anemic plus 0.2 percent. It had some cloudy news for Germany though. The selling rate in Europe’s biggest market had dipped below three million a year in July, although for the year to date sales were up 10.4 percent.

Not all forecasters are prepared to concede that the sky is falling.

“We believe in light of the speed in financial market decline and the still solid industry data it is too early to give in and make a recessionary scenario our core outlook,” said Deutsche Bank analyst Jochen Gehrke.

The PricewaterhouseCoopers monthly Autofacts report is also optimistic. Not surprisingly because it is all about Germany.

“Strong global demand for German-brand vehicles was primarily bolstered by surging sales in China, a solid luxury market recovery in the U.S., and new organic growth within emerging markets,” the report said.

Despite slightly more pessimistic consumer surveys, Germany’s economic fundamentals are still positive. GDP is expected to grow three percent in 2011, with inflation stable at 2.6 percent, and the seven percent unemployment rate remaining near historic lows, Autofacts said. The German auto industry is on track to reach a record output of six million by 2015. This year output should reach 5.8 million, up from 5.4 million in 2010, according to Autofacts.

Is it sustainable?
Despite the strong performance by the Germans, U.S. ratings agency Standard & Poors is not yet convinced this is sustainable enough to justify upgrades.

“Profitability has improved and the luxury manufacturers have gone through restructuring and efficiency programs and this produced some good results clearly and they also have strong momentum. Is this sustainable? We’ll be looking at this in the next months. If they are at a new level that might justify uprating action,” said S&P director Barbara Castellano in a video report.

One, admittedly highly unlikely, development would have all this German euphoria skidding off into a wall. The crisis in the Euro zone, which started out with the PIGS – Portugal, Ireland, Greece and Spain – and has now hit Italy and is now approaching France, contains a nightmare scenario for the Germans and their successful engineering exporters.

If the euro zone did break apart and Germany was forced to return to its old mark, this would torpedo bottom lines. The German’s use of the euro gives the likes of BMW a price advantage of around 25 percent in export markets. If Germany was forced to revert to the mark, car manufacturers would quickly have to move production out of high wage Germany, causing huge unemployment, or forego most or all of their profits. So every time you hear that Germans are reluctant this time to cough up their hard-earned taxes to bail out the latest supplicant with its begging bowl, remember that the nation reaps huge advantages from its use of the euro.

Scared silly
If the recession does return, Bernstein’s Warburton points out that the auto industry would not be a great place for investors.

“It is logical that the market (investors) flees from autos when it fears recession – these are hairy, ugly, high fixed cost, hugely operationally leveraged companies. Most will lose money and most will burn cash in a recession,” he said.

But if times do get hard, rather own German auto stocks.

“We are scared silly by what production cuts can do to the cash flow of the French and Fiat. The stocks are very cheap, but they have far greater potential to go very wrong than the Germans. We simply cannot envisage a credible scenario that would see the Germans face a liquidity crisis – unless we start talking about a Euro breakup etc,” Warburton said.

Infiniti M35h review
Glimmer Of Hope From The East For Saab