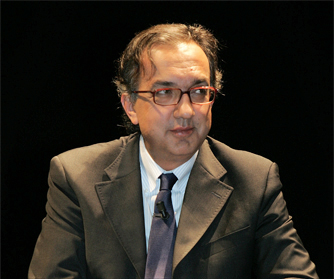 “If Fiat isn’t prepared to start the ball rolling, shouldn’t ACEA and Marchionne at least spell out exactly what needs to be done?”

Fiat-Chrysler CEO Sergio Marchionne should spell out exactly what he wants the European Union to do to help ailing auto manufacturers who are losing huge amounts of money because they have too many factories stamping out more cars than people want to buy at economic prices.

In Turin, Italy, this week he apparently criticized the Germans for getting in the way of action.

“The three German makers appear united against E.U. intervention. But no one can say that overcapacity is not a problem in Europe,” he is quoted as saying by Automotive News Europe, which headlined its story “Marchionne blasts German carmakers for rejecting EU help on excess capacity”.

Earlier in March, Marchionne said the E.U. needed to get involved in a “painful” restructuring of the European auto industry including plant closures, because if left to national governments, nothing would happen.

At the Geneva Car Show in early March, Marchionne was joined by GM’s latest ally, Peugeot of France, which talked about the need for an “industrial” policy” to help Europe’s inefficient manufacturers.

These calls for “action” are all long on rhetoric and short on detail.

European overcapacity is said by many to be at least 20 per cent of total capacity while some say it is close to 35 per cent.

Marchionne’s criticism of the Germans seems off target. Firstly, the Germans have already taken expensive and painful measures to make their manufacturing more efficient. French, Italian, and American transplants Ford and GM Europe used huge government “cash for clunkers” subsidies to ride out the 2008 recession while avoiding remedial action to shut unneeded factories. Also, even if the German manufacturers were against action this wouldn’t necessarily matter because it would be a government, not a corporate decision. And why would the Germans be interested in helping out ailing potential competitors who hadn’t bothered to put their houses in order.

If Marchionne wants action, surely he should spell out exactly what he wants to happen.

Does he want E.U. money to finance factory closures? If so how much?

Or does he want E.U. governments to relax labor laws which make it very expensive for companies to shed workers, even if they are clearly uneconomic and in danger of slow bankruptcy?

As Renault-Nissan CEO Carlos Ghosn said last month at the Geneva Car Show, everybody knows drastic action and closures are called for.

“All have capacity problems. When one starts, the others will be forced to follow,” he said.

Why isn’t Renault leading this?

“You have to look at who needs it the most, then everyone will follow them,” Ghosn said.

Marchionne is current president of the European automakers association, known by its French acronym ACEA.

If Fiat isn’t prepared to start the ball rolling, shouldn’t ACEA and Marchionne at least spell out exactly what needs to be done?