Latest Version Has Room For Golf Clubs Too.

LLEIDA, Spain – Jaguar’s F-Type coupe, set to spearhead the advance of the ambitious British-based and Indian owned Jaguar Land Rover (JLR)  maker of premium sports cars, sedans and SUVs, will go on sale in the U.S. and around the world next month.

The two-seater sports car is not for the shy and retiring car buyer; if its handsome lines don’t grab your attention, the shriek and roar of the howling engines will.

The coupe, and the convertible version of the same car launched last year, won’t sell in huge numbers. According to Jonathon Poskitt of LMC Automotive, Jaguar will sell around 16,000 F-Type coupes and convertibles globally a year, split 60:40 in favour of the coupe.

The F-Type has the role of halo product for Tata of India owned JLR, as the company seeks to compete in the German-dominated premium vehicle sector. When Tata bought JLR from Ford in 2008 for $2.5 billion, not many observers saw much chance of success. But a combination of shrewd investments and a drive to fix previous endemic quality problems has produced a dramatic transformation.

Professor Ferdinand Dudenhoeffer of the Center for Automotive Research (CAR) at Germany’s University of Duisberg-Essen describes JLR as one of the most important premium car makers, thanks in part to some German top management. New models like the F-Type and particularly the eye-catching Evoque compact SUV have been hits. Redesigned big Land Rover SUVs have been big sellers too, with China emerging as a strong buyer.

Record in 2013
JLR sold a record 425,000 vehicles globally in 2013, and Dudenhoeffer expects this to rise to 600,000 in five years, while in 10 years, the company will probably overtake Toyota of Japan’s Lexus premium subsidiary.

“At the moment there are the big three premium car makers BMW, (VW’s) Audi and Mercedes. In 10 years there will be a big four, and we will add Jaguar Land Rover to the list,” Dudenhoeffer said.

Meanwhile Jaguar is launching the F-Type coupe at this historic city in Catalonia, about 100 miles west of Barcelona. The area boasts a race-track so that the limits of the car can be explored safely, demanding mountain roads, and highways to show off its ability to cruise over long distances comfortably. The top of the range R Coupe has a 543 hp 5.0 liter V8 supercharged engine catapulting the car from rest to 60 mph in 4.0 seconds. More affordable versions (prices start at $65,000) are the base-model with a supercharged V6 335 hp engine, or a more powerful V6 “S” producing 375 hp. The R Coupe will reach 186 mph on unlimited German highways before the computer steps in to say “enough”. Computer technology to raise safety levels and improve handling and efficiency include an Electronic Active Differential and Torque Vectoring. A spoiler rises up at the rear end when the speed hits 70 mph, which might give speed-cops an unfair advantage when they see it deploying. Optional extras include ceramic brakes, which provide more durable stopping power, while all models have an eight-speed “Quickshift” automatic gearbox, with manual override using paddles on the steering wheel. The F-Type boasts an all-aluminum body offering more strength with less weight. A glass-roof option adds to the already dramatic styling. One button on the dashboard lets you offers induce the engine to make more noise.

Howling crescendo
“It offers an authentic, rich sound, developing to a howling crescendo as the upper limits of the rev range are reached,” the Jaguar blurb says.

The system also makes a howling noise when you simply turn on the engine, which good neighbours might want to disable.

The S-Type needs to be good because higher priced versions have some formidable competition including the Porsche 911, Aston Martin Vantage, BMW M6, Audi R8, Mercedes SL, and loaded versions of the Cadillac CTS Coupe, Ford Mustang, and Dodge Viper

When the convertible model was launched last year, one glaring shortcoming was a laughably miniscule trunk. That has now been rectified with the coupe, allowing Jaguar to brag that two sets of golf clubs can be carried. Sighs of relief at the country club? That’s what Jaguar hopes. 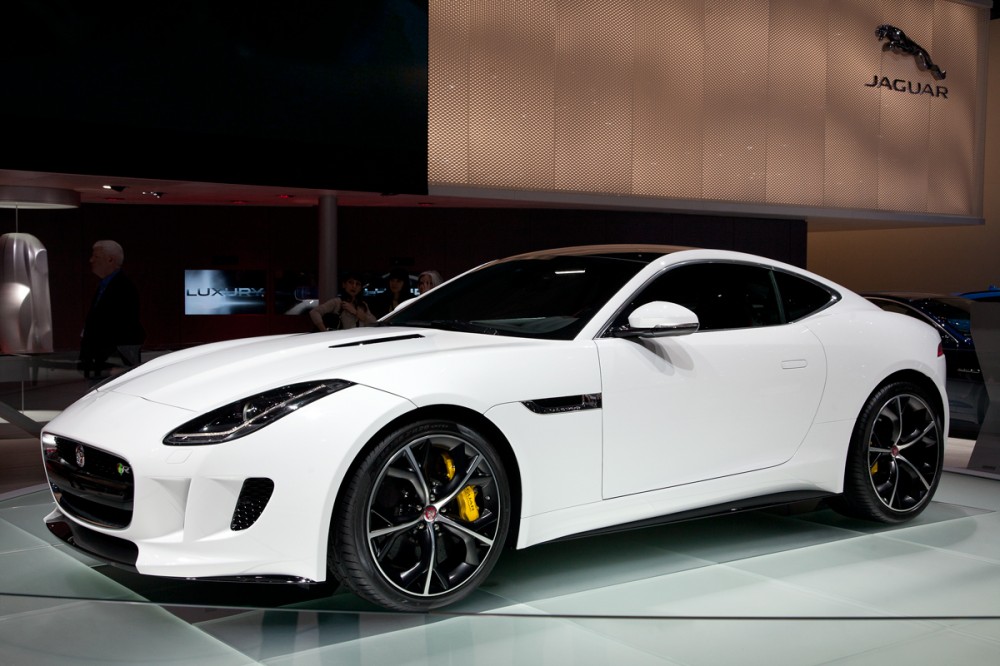