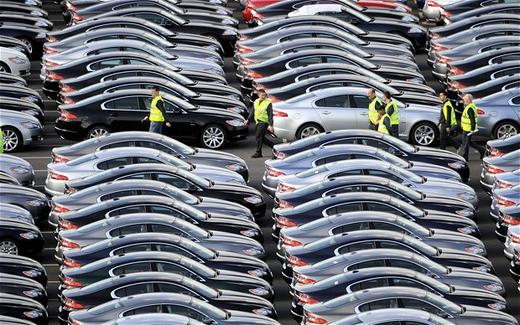 Talks Of Alliances And Cooperation Fudges The Issue
Without Pain, There Will Be No Gain

Whoever invented the idea that if you ignore a problem for long enough it will eventually go away, might have been thinking about the European auto business.

As manufacturers gather for the Europe’s first big automotive gathering of the year, the annual Geneva Car Show next month, expect a reversion to a more traditional bragfest about horsepower and sexiness, after a couple of years of pushing green themes and electric cars failed to make much impression on sales.

But car buyers across Europe are being spooked by fears for their jobs and personal prosperity as governments desperately try and cure the euro currency zone crisis, and slash spending and batten down the hatches for a recession. As sales prospects fade and profits disappear, experts wonder if this time, European governments will finally bite the bullet, stop subsidizing losers, and give the industry a chance to get into shape to face down the coming Asian challenge?

The answer is of course, no.

The case for action is compelling, although the indictment doesn’t include German manufacturers like Volkswagen, and its premium brothers-in-arms BMW and Mercedes. That still leaves a bunch of shaky looking car manufacturers like France’s Peugeot-Citroen and Renault, Italy’s Fiat, and the American transplants GM Europe with its Opel and Vauxhall subsidiaries, and Ford Europe.

Loss makers
According to a report from investment bank Morgan Stanley, Europe has the capacity to make 25 per cent more cars than it can sell. Sixty per cent of European Union (E.U.) mass manufacturers’ plants will be loss making in 2012.

“Our work suggests that only VW, Hyundai and premium makers can be profitable in Europe in 2012,” said Morgan Stanley analyst Stuart Pearson in the report.

“We estimate that 1.5 million units of capacity reduction is required for mass manufacturers to break-even in Europe,” Pearson said.

The report predicted that E.U. sales will fall six per cent in 2012, and make a weak recovery between 2013 and 2015 which will still leave sales 10 per cent below 2007 levels. Because of a lack of action to shut plants, European mass car makers face a prolonged period of losses.

In a logical world, these non-German manufacturers which rack up big losses would find themselves on the financial scrap heap, or forced to merge with more successful companies, shedding jobs and junking value-destroying factories at the same time. But this is the automotive business where normal rules don’t apply, and governments fear a backlash from their voters if they let a national champion succumb.

Wounded companies
Another investment bank, UBS, looked at the possibility of wounded companies seeking rejuvenation by merging with others, and came up with compelling reasons why it was necessary, but concluded that nothing would happen.

“While industry fundamentals more than argue for consolidation, we believe that major or transformational deals will take longer to materialise, as governments in Europe will likely delay any deals,” said UBS analyst David Lesne in the report.

Adding the word “endlessly” or “forever” after “delay” would probably be more precise.

The report said that unlike in America, where the bankruptcy of GM and Chrysler prompted a political debate leading to massive capacity cuts, and huge taxpayer bailouts, action in Europe was still national. Until the E.U. had a single-government like the U.S., national champion arguments would trump rational economics.

One reason put forward for Peugeot-Citroen, reportedly in alliance talks with GM Europe, delaying serious action to rationalize its loss-making operations is the imminent presidential election in France. But current president Nicolas Sarkozy quickly lost his reforming zeal when he was voted in five years ago, and orchestrated loans of $4 billion each for Peugeot and Renault when the car market collapsed. The small print said no factories could be closed, and this effectively vetoed any chance that the companies would restructure and get into healthy financial shape. If Socialist candidate Francois Hollande wins the presidential election in May, he is unlikely to allow any reform leading to a slimming of the workforce.

Clunkers
The UBS report said that government support was likely to continue, and even thought the return of “cash for clunkers” subsidies was on the cards. Any takeover or merger activity was unlikely because Asian upstart companies could see that the European market wasn’t the place to be, not least given that the average age of a car was less than eight years old, compared with 10 years plus in America, the pressure was to put off buying new vehicles.

For Peter Schmidt, editor of European newsletter Automotive Industry Data (AID), all this talk of cutting capacity is merely short-termism, and says that companies falling into this trap will simply concede healthy sales when the upturn arrives.

Schmidt said the Germans have stolen a march on the rest of Europe by taking painful decisions during the last downturn. German companies did deals with unions which meant that the country in Europe with the highest costs managed to negotiate productivity deals which are now paying off. The Germans were also relentlessly investing in new products, manufacturing techniques and technology which would provide the best fuel efficiency. Schmidt exempts Ford Europe from his criticism, which he says is brilliantly run.

Somebody else will sell
“The problem is not too much capacity, but making cars that people don’t want to buy. If you cut capacity today you can rest assured that when the next upturn comes you won’t be in a position to react. Somebody else will do the selling, not you,” Schmidt said.

The non-Germans, particularly the French, have taken their eyes off the ball.

“GM Europe, Peugeot-Citroen have been outmanoeuvred by their German rivals and rested on their laurels, particularly the French which were praised for their cost control and efficiency, but this is an illusion. Look at Renault and their new model cupboard looks bare. The French stood still with diesel engine development. Renault went electric and bet the house on that and failed to develop what was needed. That is bread and butter cars that people can afford,” Schmidt said.

Professor Ferdinand Dudenhoeffer of the Center for Automotive Research (CAR) at the University of Duisberg-Essen in Germany said that over the next three to four years in Europe, overcapacity will reach two million cars, but this will sink back to about one million as rebates and incentives lure buyers. Dudenhoeffer thinks there will be some capacity cuts, but nothing seriously terminal for the manufacturers, and no really radical changes. Fiat-Chrysler is in most danger.

“Without Chrysler, Fiat would in jeopardy, with profits from America balancing losses. There is no money for new products and that could hurt them in the long run,” Dudenhoeffer said.

Cycle continues
Professor David Bailey of the Coventry University Business School agreed that there is too much capacity in Europe, but expects the cycle of government bailouts to continue. The manufacturers have grown skilled at persuading governments to subsidize new plants, then getting them to cough up more money to stave off closures or redundancies.

“Radical change is needed because the business model for the mass market players is fundamentally flawed. In the good years they make modest profits, then big losses when they look for bailouts and subsidies from governments,” Bailey said.

Will there be action which might force change on the flawed models?

“I still wonder whether we will ever see this needed restructuring,” Bailey said.

For all the clamor to slash and burn factories and workers, radical action doesn’t look likely, and happily, this apparently won’t lead to any apocalyptic judgment day. Let’s hope Asians like Hyundai and Kia don’t try too hard, while the Chinese also decide they don’t like what they see when they measure prospects for car sales in Europe. There is still time to follow this advice from AID’s Schmidt.

Nobody disappears
“If you’ve got the right product, everything else follows. I don’t think GM will dump Opel-Vauxhall, although they might shut one or two plants. Peugeot and Renault too. Fiat too will be around. Maybe (VW’s) SEAT may go, maybe Fiat will sell its Alfa badge to VW. But I can’t see anybody disappearing,” Schmidt said.

Sometimes when you’re faced with a radical choice, it’s best to change the subject.

The Geneva Car Show opens to the public March 8 through March 18. Notable debutants include the Audi A3, Porsche Boxster, Opel Mokka and Maserati GT Sport.