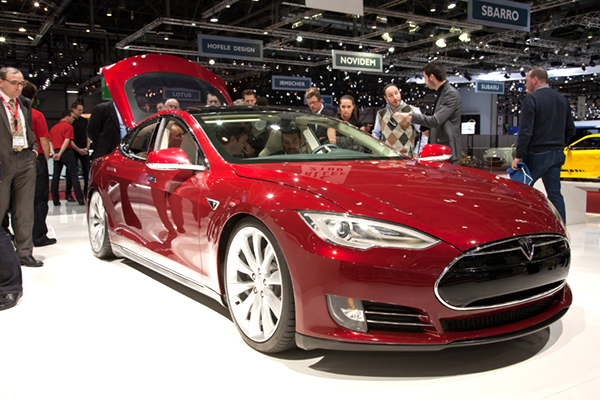 All Tesla Range Data Assumes Constant 55 mph
Model S Can Only Go Like A Supercar In Short Bursts?

GENEVA, Switzerland – When the Tesla S goes on sale in Europe next year, you will be able to spot it easily because it will be the only super-car in the slow lane.

In order to drag the S’s range out to the maximum, speeds shouldn’t exceed the old U.S. speed limit of 55 mph. That would put you amongst the trucks on Europe’s main roads.

Tesla CEO Elon Musk told a press conference at the Geneva car show that the S will be capable of 300 miles between charges, as long as you keep the speed down to about 55 mph. Musk said the range available meant that the Tesla electric car was more like a regular car.

Musk said a new charging system means it will only take about 30 minutes to put another 150 miles of range in the tank.

“All our data on range assumes a speed of 55 mph,” Musk said in reply to questions at the show.

Musk said sales of the S model will start in Europe in the first quarter of next year.

The average speed on Europe’s highways is about 80 mph. Some of Germany’s freeways have no speed limit at all.

But one important question mark remains to be resolved; what will the car’s range be if it is driven like a sports car, using the acceleration and high speed cruising ability? The company claims a range of 160 miles for the basic $57,400 (before federal tax credit of $7,500) model. This can be almost doubled to 300 miles at the cost of more batteries costing $20,000, or a 230 mile option costing an extra $10,000.

Investors have been reassured of the technical ability of Tesla’s hardware because it has sold battery packs and chargers to Daimler of Germany for its Smart and A class electric vehicles, and electric power-train systems to Toyota of Japan for its RAV4 EV. Daimler also has a 7.2 per cent stake in Tesla. There are other models in the pipeline, including the Model X SUV expected to reach the market by the fourth quarter of 2013.

But if these doubts about the range are true it suggests that Tesla would have more of a chance of long-term success if it built less ambitious vehicles, like the Renault Twizy, which is more like a glorified golf cart. The Twizy has a limited capability, but costs about £6,000. The Tesla S looks fabulous, is luxurious and comfortable, but apparently can’t sustain supercar mode for long.