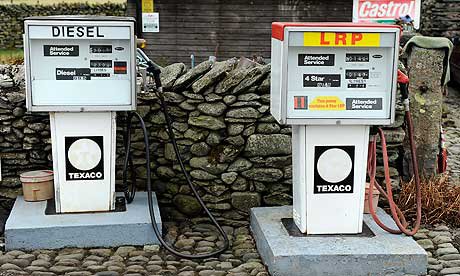 You have to hand it to the relentless, come-back kids who want Americans to embrace diesel cars.

About three years ago, the diesel forces led by the Germans, were poised to attack, armed with a convincing portfolio of claims to persuade  Americans to dump all their old notions about oil burners.

Diesels weren’t the hopelessly unreliable, noisy, smelly, smokey and gutless clunkers which emerged during the 1970’s oil crisis. On the contrary, modern diesels were quiet, effortlessly smooth, torquey and much more economic than traditional gasoline engines. They were so good, that rich German buyers of top of the range Mercedes S class and BMW 7 Series sedans would specify diesel about 80 per cent of the time. Forecasters scrambled to raise their estimates of the huge amount of share these diesels would command, with some predicting this would reach 15 per cent of the U.S. market by 2015.

But these hopes crashed and burned as the price of diesel jumped, and the economy and car sales generally collapsed. As the car market revives and with U.S. fuel economy rules poised to tighten, Americans are looking for more fuel efficient motoring. The price of diesel is not much higher than gasoline now, and the proselytizers are refusing to quit, regrouping their forces and trying again.

Here in Europe, where every other new car bought is a diesel and the cost of fuel is eye-wateringly expensive, car buyers have long seen the advantages. But even in diesel-mad Europe, there has been a resurgence in demand for these cars. In the last six months, diesel market share in Western Europe suddenly soared to 55.3 per cent from 50.1 per cent in the same period last year, according to newsletter Automotive Industry Data (AID).

This is for a combination of reasons, according to AID managing director Peter Schmidt, which might also offer some new ammunition to persuade Americans to buy diesel, including more improvements in efficiency.

Squeeze
“There has been a squeeze on Europeans’ disposable incomes because of the economic recession with people trying to cut costs wherever they can and motoring is one. Consequently the idea that running a diesel car of almost any size saves money has taken hold again. Also there have been renewed improvements in the latest generation of diesel engines which lower running costs, while government taxation rules are forcing people to buy more economical cars,” said Schmidt.

Schmidt says that diesels always were very economic, but the latest models are even better, although the reasoning doesn’t apply to the smallest of cars like the little Fiat Panda or Volkswagen Polo. Diesel engines raise the price of these cars by between 20 and 30 per cent, and small car drivers typically don’t do enough miles to be able to get their money back in lower fuel costs. It is the next size up, from small family cars like the VW Golf and Ford Focus, where diesel starts to make sense. The bigger the car, the more sense it makes. And this concentration on fuel economy has served up another new factor, says Schmidt.

European and Americans manufacturers have been pushing new gasoline engines which are lighter and use turbo-charging to extract more power and fuel economy. But they can’t match diesels, Schmidt says, reckoning that over the last couple of years, gasoline engines have improved fuel efficiency by 3.5 per cent, while diesels have spurted ahead again with a seven per cent gain.

Thirsty
“In the real world, on the open road, these turbo-charged gasoline cars are remarkably thirsty and come nowhere near claimed fuel economy levels,” says Schmidt.

The renewed improvements in diesels will have a negative impact too on gasoline-electric hybrid car sales, says Schmidt. He pointed to the fuel economy of the Porsche Panamera diesel, which claims 34.6 miles per U.S. gallon, compared with the Panamera hybrid’s 32.7 mpg, which might not seem much until you realize that the hybrid costs about $36,000 more for a comparable performance.

Lars Ullrich, director of Bosch Diesel Systems Marketing, North America, says diesel market share in America will reach 10 per cent by 2015. His company has scaled down its previous forecast of 15 per cent made before the 2008 downturn. This compares with forecasts from J.D.Power of 3.1 per cent in 2011 accelerating to 7.4 per cent by 2017. Baum & Associates expects around 4.5 per cent this year, growing to between six and 6.5 per cent by 2015.

Bosch’s Ullrich said in a telephone interview from his Farmington Hills, MI, office, that American car buyers are ready and willing to buy diesel.

“Many new buyers are choosing diesels. In June, the “take” rate (when buyers are offered a choice between gas and diesel) was 34 per cent. That includes buyers of the Audi A3, Audi Q7, BMW 335, BMW X5, Mercedes E and G class, VW Golf and Jetta. For the Jetta the take rate was 58 per cent,” said Ullrich.

Key driver for change
(Almost 30 per cent of new VW Jettas sold in the U.S. are diesels, across all markets including California, which has the toughest emissions standards).

“There is a key factor which is changing the market. The new generation of diesels is extremely clean and can change the market here in North America. These cars are fun to drive and economical too; that’s the key driver for change. There’s another change coming in 2016, when fleet average fuel consumption must reach 35.5 mpg. So manufacturers have to look for alternatives to meet this new regulation. Diesel is one of these,” said Ullrich.

Perhaps the key to triggering American interest in diesels will be if GM, Ford and Chrysler decide to enter the market in a big way. These companies certainly have access to diesel technology because of their European subsidiaries or associates. News earlier this week that GM’s Chevrolet will offer a diesel engine in the Cruze in 2013, suggests the tide may be turning. Chevy last offered a diesel in 1980s, in the Chevette subcompact.

One of the inhibiting factors on diesel use in the past has been the price and availability of the fuel. According to Ullrich, the diesel premium is now about six per cent, but this is more than compensated for by the 30 per cent improvement in fuel economy. Fuel availability should be less of a problem because several oil companies have increased refinery capacity for diesel in North America.

Big differences
Eric Fedewa, auto analyst for IHS Automotive in Detroit, can see the case for diesels, but isn’t so sure a breakthrough is imminent. He points to the higher costs of engineering for a diesel engine, and the fact that the availability of diesel fuel in the infrastructure is still not ubiquitous. Power train options in the future are likely to be wide-ranging, with hybrids, diesels and electric vehicles, and that’s why there are big differences in some market forecasts.

Costs will be the main determinant.

“There is a potential to expand the diesel market in North America, but all the barriers are still there and there are significant challenges for engine manufacturers and technology suppliers. First and foremost is cost of manufacture; that is always the biggest factor,” Fedewa said.

Professor Ferdinand Dudenhoeffer of the Center for Automotive Research at the University of Duisberg-Essen in Germany isn’t convinced that diesels are about to conquer America.

He points out that in Europe, government taxation is often the reason diesel has a financial edge, while the price premium in the U.S. makes it hard for diesel to appeal.

Looking to the medium term, Dudenhoeffer said the search for the most environmentally friendly and energy-efficient fuel for the U.S. points to natural gas, which is being pushed by Fiat-Chrysler. In Europe, politicians are becoming uneasy about the contrived advantage received by diesel. The European Commission, the European Union’s executive arm, has said this subsidy for diesel can’t go on, and wants all fuel to be taxed based on its energy content. This would be bad news for diesel and good for natural gas, but this change isn’t likely to start until 2023.

The likes of BMW, VW and Mercedes shouldn’t get too enthusiastic about diesels in the U.S.

AID’s Schmidt believes that because Americans buy larger and more powerful cars, diesels are the perfect solution for them, beating hybrids for economy and price. But it needs a final push from U.S. manufacturers to get into a higher gear.

“That’s the big if. Now it is just the Europeans pushing diesels into North America. If the likes of GM, Ford and Chrysler don’t follow suit, it will be a fringe sector forever,” Schmidt said.

That Chevy Cruze news could be the game changer.