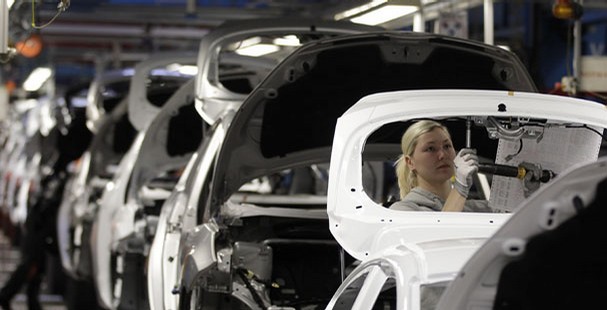 “The crisis in Europe is not over, but is just beginning.
In 2013 we predict the worst auto sales in Western Europe since 1993”

As Europeans head back from their beaches and holiday homes, a second European recession in three years looms, and a feeling that the economy is drifting, pilotless, on to the rocks, is taking hold.

A weak economy is bad enough for the rest of the European automobile industry, but this is being exacerbated by the euro financial crisis. Latest data from euro zone purchasing managers predicts a second quarter in succession of negative economic activity, the accepted definition of a recession. Euro zone GDP slipped 0.7 per cent in the second quarter. Every night the TV news is full of stories, not only about the threat to jobs from the economic slowdown, but also about a possible economic “meltdown”, whatever that is, which might happen if the eurozone “implodes”. All this colorful talk probably reflects as much on the reporters and politicians lack of understanding of the actual outcome of a breakup of the euro currency zone, but none of it is designed to create the confidence required for car buyers to visit the local dealership and make the second biggest purchase of their lives.

The saga between Athens and the European Union is likely to end with Greece being forced out of the euro currency grouping. That sounds like much ado about nothing. After all, Greece is a miniscule part of the European Union. But the biggest threat comes from Italy and Spain. If these two more important countries are forced out of the eurozone there will be much embarrassment from politicians, but it remains to be seen just how chaotic the result would be. When the dust settles, it surely wouldn’t take long for normal business to resume using their old currencies, the lira and peseta.

Uncertainty
But it is always the uncertainty which stifles business, and analysts are busily slashing their forecasts for European car sales.

LMC Automotive cut its 2012 Western Europe sales forecast 7.2 per cent to 11.9 million. Others are predicting a fall of at least eight per cent. Non-German domiciled mass-market manufacturers like General Motors Europe’s Opel-Vauxhall, Ford Europe, Fiat of Italy and Peugeot-Citroen of France are drowning in red ink. Only France’s Renault seems to be operating in the black. Market leader Volkswagen of Germany is still making decent profits, while its upmarket subsidiary Audi, and its competitors BMW and Mercedes are still coining it, thanks to massive profits in China. But even these giants are starting to batten down the hatches to fend off the coming economic storm.

According to Professor Ferdinand Dudenhoeffer of the Center for Automotive Research (CAR) at Germany’s University of Duisberg-Essen, things will be very bad in Europe next year too.

“Greek bankruptcy by the end of the year seems hardly avoidable. Italy, Portugal and Spain face harsh austerity. The crisis in Europe is not over, but is just beginning. In 2013 we predict the worst auto sales in Western Europe since 1993,” Dudenhoeffer said.

U.S.-style bailout?
The parlous state of Europe’s non-German car manufacturers has led to speculation that a U.S.-style bailout might be imminent. In 2008/2009 the U.S. government saved General Motors and Chrysler with about $34 billion of taxpayers’ money.

That kind of money is unlikely to available for any European restructuring. In 2009, the French government lent Renault and Peugeot-Citroen $3.8 billion each to help them ride out that recession, while many European governments subsidised cash-for-clunkers schemes. Experts say that instead of taking harsh decisions, which would have made them more competitive now, the likes of Peugeot used the money to ride out the storm, before paying it back. Last month Peugeot, in which GM has a seven per cent stake, announced 8,000 redundancies in Europe and said it planned to close a car plant near Paris in 2014. The new French socialist government huffed and puffed but so far hasn’t taken any notable action.

Other manufacturers are taking long-overdue action to cut output. GM’s Opel/Vauxhall this week said it will halt output at two plants in Germany because of a drop in sales. This short-time working attracts some government subsidy money. Opel/Vauxhall workers are awaiting a new turnaround plan to finally choke off its huge losses, which is likely to involve the closing of a German plant. Fiat of Italy, which controls Chrysler, is believed to thinking of closing factories.

Protection
Professor David Bailey of the Coventry University Business School expects the French government to intervene to support its car industry by reintroducing scrapping subsidies or other protective measures.

Will we see a U.S.-style government funded rescue plan?

“That’s unlikely because there simply isn’t the money in government budgets to support industry. Quite whether these current problems will produce massive restructuring I don’t know. We’ve been here before and industry and government have muddled through, but there might be more restructuring than we’ve seen before. Peugeot-Citroen and Fiat are the most vulnerable. Renault seems to just about be breaking even. Basically, the entire European industry will be affected, although the Germans are weathering it with the big profits and other operations across the world,” Bailey said.

According to CAR’s Dudenhoeffer, amongst all this mayhem, VW is emerging as a big winner. Premium sports car maker Porsche recently joined VW, which also has mass-market brands like Skoda and SEAT, to go with its Audi, Bentley, Lamborghini and Bugatti companies.

“One of the major crisis winners is the VW group, which now has about 25 per cent of the market. After the crisis, this could move up to perhaps 30 per cent. The VW group is already twice as large as second-placed Peugeot-Citroen’s 12 per cent,” Dudenhoeffer said.

Despite its dominant position, VW and its compatriots face some risks if the euro crisis unwinds with some harsh consequences for Germany. Germany’s use of the euro currency gives its exporters a huge export price boost. If the euro unravelled and Germany reverted to its old currency the mark, this would torpedo exports.

Unacceptable outcomes
According to Bailey, the euro crisis is likely to be concluded by one of two outcomes, both of which seem unacceptable now.

“Either the euro zone breaks up in some way, or to hold it together Germany allows the European Central Bank to buy bonds of indebted countries, and instigate a single budget for Europe with stricter controls on national spending. Germany doesn’t wasn’t to see a breakup of the eurozone because this would lead to a 30 per cent appreciation of their currency,” Bailey said.

“Both seem very unlikely, but one of them is going to happen,” Bailey said.

Even the traditional European way of muddling through and calling for another summit meeting can’t go on forever, can it?