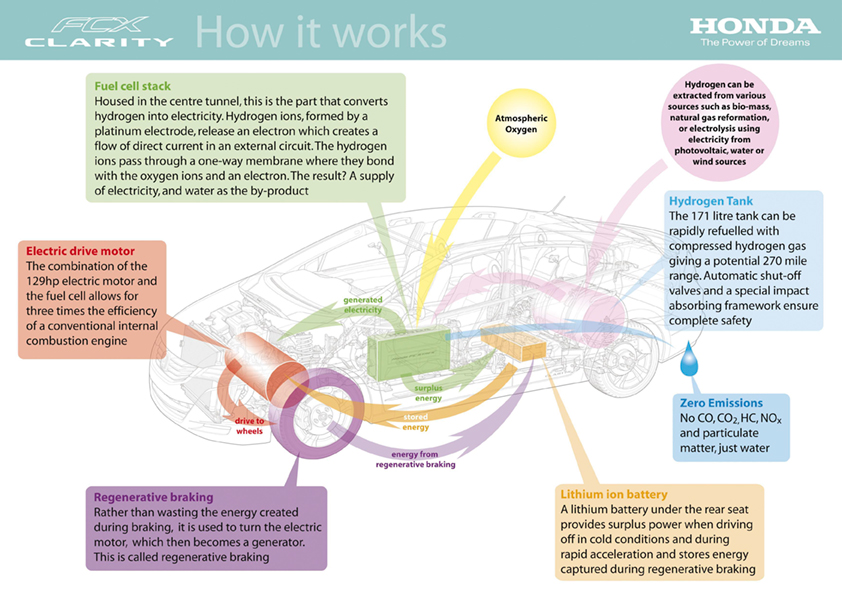 Cynics might say car manufacturers have come up with a new and novel way to squander their shareholders’ hard-earned money.

Not satisfied with spending billions of dollars on battery-only cars that nobody wants, many are now seeing the error of that dead-end policy and have come up with hydrogen power as a new way to produce new carbon dioxide-free (CO2) cars, which nobody can afford.

Hydrogen-powered cars will be even more expensive than battery-only cars, with base models costing more than $135,000 by 2020, according to IHS Automotive. But at least you won’t find the range suddenly halves when it snows a bit, or if you think about exceeding the speed limit slightly, and should be able to emulate the kind of distances routinely provided by gasoline and diesel cars.

These value-destroying moves to produce battery-only cars which have zero emissions of local CO2 have been forced on car companies by politicians in Washington and Brussels. In Europe, manufacturers must produce fleets of cars by 2020 with an average fuel consumption of close to 60 miles per U.S. gallon. Washington has decreed that by 2025 average fuel consumption will be 54.5 mpg.

This all made more sense about five years ago when the prospect of oil-supplies running out and becoming hugely expensive was real. But the advent of fracking technology for oil and gas has transformed supply in the U.S. and promises to do the same across Europe and China. It used to make sense to make provision for the days when internal combustion engines had little or no traditional fuel. That’s perhaps not the case now.

Recently there has been a flurry of action by big auto manufacturers to pool resources to pursue their hydrogen dreams. Last month Toyota of Japan and Germany’s BMW announced a joint fuel-cell alliance. This was followed by a similar announcement from Mercedes parent company Daimler, with Ford and Nissan. General Motors has a well-established fuel cell project. So does Honda, which is already producing small numbers of its fuel cell vehicle, the FCX Clarity. Mercedes has an experimental fuel-cell version of its little B-Class vehicle.

Water only
“Powered by electricity generated from hydrogen and oxygen, fuel cell electric vehicles (FCEV) emit only water while driving. FCEVs are considered complimentary to today’s battery-electric vehicles and will help expand the range of zero-emission transportation options available to customers,” said Daimler, Ford and Nissan in a joint statement. They hope to have a vehicle on the road by 2017.

Investors in Renault-Nissan will be grinding their teeth too. The French-Japanese alliance, inspired by CEO Carlos Ghosn’s claim that global sales of battery-only vehicles would reach 10 percent of global sales by 2020, has committed $5 billion to produce a range of electric cars. Alliance electric vehicle production was planned to reach 500,000 a year by 2015. Sales should have reached 1.5 million electric vehicles by 2016.

Gasoline still reigns
Prajyot Sathe, analyst with Frost & Sullivan in London, agrees that traditional cars rule, for a while yet.

“Gasoline and diesel are expected to remain the main fuel types used in transport for at least another decade. The use of alternative fuels will also increase, however, the hydrogen/fuel cell vehicle will become popular only after 2020. The industry requires significant improvements in efficiency, cost, and methods of hydrogen production distribution and storage,” Sathe said.

Phil Gott, IHS Automotive analyst based in Lexington, Mass., says the drive to at least explore fuel cells in the U.S. is driven by regulators in California who have mandated a number of zero-emission vehicles. Thirteen other states have followed California, so manufacturers don’t want to be excluded, and produce electric vehicles. Electric vehicles have proven expensive and instil so-called range-anxiety, so the hunt is on to find an alternative.

“People are not clamoring for more expensive, less useful vehicles. When the public think about these things, (the range) has got to be the equivalent of gasoline or diesel vehicles. battery-only never will, so fuel cells might get the range people want,” Gott said.

Thilo Koslowski, analyst with Gartner Inc in San Jose Calf., said car manufacturers had spent time previously developing fuel cell cars before concentrating on battery-only and hybrids, but because battery-only is still not up to the job, hydrogen is returning to the spotlight because in theory it can match the performance of traditional gasoline engines.

“The fact that recently there has been so much cooperation announced by big manufacturers tells me that they are having some breakthroughs in bringing down costs and creating motors which allow you to convert the hydrogen into electricity more cheaply,” Koslowski said.

Hedging bets
“This is also a hedging exercise. Car manufacturers need to hedge because they don’t know if there will be a battery technology breakthrough and they are under pressure to bring down fuel use,” he said.

Koslowski believes that if energy providers see the big car manufacturers getting serious about fuel-cells, they will have an incentive to start providing the infrastructure need to support the supply of hydrogen.

The peak-oil arguments may have gone away, but strong environmental reasons still remain.

“Efficiency requirements are not just driven by peak oil, but also by CO2, health and environmental reasons. If you can avoid CO2 emissions from the tailpipe and centre it where it’s made, that is the goal here too,” Koslowski said.

IHS’s Gott said battery electric is currently the best if you just want to drive into the office, plug in for a charge, and drive home again. But traditional gasoline or diesel is still best for long hauls and is not bad in terms of efficiency. Hydrogen in theory could fulfil both these roles.

“There will be a lot more car sharing because people want more versatility than a given power train will give them. Changes in ownership patterns as well as vehicle technology. Nothing is stable in this picture,” Gott said.

“You’re seeing these partnership announcements because the industry is trying to figure out economies of scale to create the infrastructure as well as getting the price of components down. If it works it will show potential infrastructure companies a virtuous circle and that they are serious,” Gartner’s Koslowski said.

And of course a virtuous circle beats a vicious one every time.