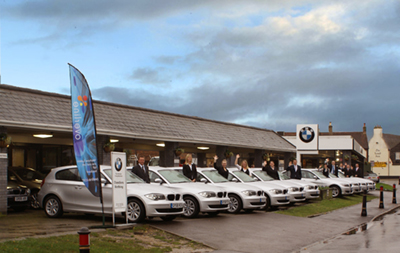 I’ve always thought the text messages car dealerships routinely send out to see if you were happy with the service received were simply public relations scams.

They are knee-jerk messages sent out by computers to pretend that the dealership is concerned about the customer, and also to demonstrate how modern and cool it is. A reaction isn’t expected. If there is one, the computer is told to munch on it.

Life is simply too short to react to these silly messages, but in the interest of my readers, I decided to test my theory.

I took my car into my local BMW dealership, Chandlers of Worthing. Admittedly, my problem was a bit dull. About three years ago I took my 2002 330d SE into Chandlers because of a leak in the water reservoir for the wipers. At least twice, Chandlers said the problem (hardly in the rocket-science category) was fixed. Each time after a week or so the problem reappeared. Given that each time you take the car in a considerable amount of time is wasted just hanging around, I was exasperated and decided I would simply live with it, and top up with fluid after every couple of weeks. But lately the problem has become much worse so I thought I might shame Chandlers into finally solving the problem.

Some hopes
Chandlers declared it would cost me a hundred odd quid to fix. Given that they failed to do it at least twice before, I wasn’t impressed. At the same time, Chandlers tested for faults because a couple of dashboard warning lights were coming on – one for ABS and one for the handbrake. These lights are clearly malfunctioning because if you turn the engine off, then turn it on again, the lights go out.

Given that it wouldn’t have taken a human much of an effort to realise I would have been completely unsatisfied, a couple days after the visit to Chandlers, I received this computer generated text message.

“We hope you are completely satisfied with your recent visit to Chandlers Garage. Thank you.”

I replied – “I should have known better. You tried twice to fix the problem with my leaking washer reservoir. I couldn’t be bothered to go through it a third time. But it finally got so bad I thought you’d be shamed into finally fixing. Result? Still doesn’t work. I’m £50 worse off”.

Chandlers charged me £50 to plug the car into their computer to find out what was wrong with the faulty dashboard lights.

If Chandlers’ computerised texts are designed for public relations, I’d say it was time to return to the drawing board.