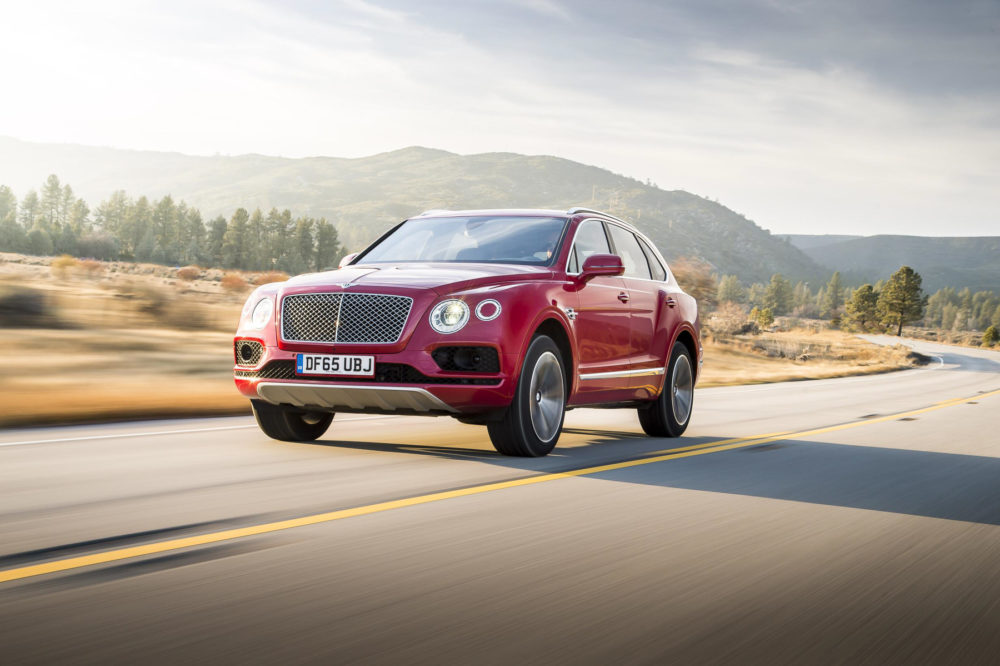 “Bentley has the ultra-luxury SUV sector to themselves, but they won’t in just a year or so from now”

If you’ve got a quarter of a million dollars to spend, this could be the SUV for you.

For most people that kind of talk belongs in the movies, or might be overheard in an NFL locker room or appear in a fantasy novel, but there are thousands of people out there who have that kind of money and will, poor things, have to agonize over their choices.

As it happens, at the moment the agony of choice is mitigated in this stratospheric market niche because the Bentayga, by storied British luxury car maker Bentley, stands alone as the most expensive, most luxurious and fastest SUV in the world. It will reach 187 mph on an unrestricted German highway thanks to its 12 cylinder, 600 hp, twin-turbo gasoline engine.

For the moment, there are no contenders for the Bentayga to beat, but other super-luxury car makers are frantically trying to put together their own massive go-anywhere leviathan’s. British luxury sports car maker Aston Martin hopes to launch its DBX SUV in 2020. British based and BMW owned Rolls-Royce is also planning a rival. Lamborghini, like Bentley, owned by Volkswagen, and even Ferrari are eyeing this sector covetously, although the latter has hedged what would be a massive break with tradition by pretending it’s not really planning an SUV but which is being called an FUV for Ferrari Utility Vehicle. That sounds like an oxymoron.

IHS Markit analyst Tim Urquhart thinks it makes sense, although Bentley has yet to announce a decision.

“I would do it if I was them although it depends on where they want to take the brand. There’s plenty of scope for $100,000 to $140,000 small Bentley, maybe like a high-end Porsche Macan which would be fast and performance orientated,” Urquhart said.

Porsche was the first maker of expensive, sporty cars to think an SUV made sense and wouldn’t taint the brand. Its launch of the Cayenne more than 10 years ago has paid off big for this VW subsidiary. The Macan is smaller than the Cayenne.

“They have got to be incredibly careful with a brand like Bentley that you don’t make it commonplace,” Lindland said.

That would suggest that the only way is up for super-luxury premium brands, and surprisingly the market for these hugely expensive playthings is showing no signs of getting close to a ceiling.

“Bentley has the ultra-luxury SUV sector to themselves, but they won’t in just a year or so from now. There seems to be no imminent ceiling in this (super-luxury) sector even though it seems an insane amount of money,” Lindland said.

“There’s still a huge amount of potential in this market as long as people are getting richer. I don’t put a limit on it. There are 600 billionaires in the world now. There’s still a big growth area for ultra-premium brands,” Urquhart said.

When Rolls-Royce eventually launches its Bentayga rival it is likely to cost at least $100,000 more than the $250,000 Bentayga, says Autopacific analyst Dave Sullivan.

“Yes, suddenly everyone wants a piece of the SUV craze, even brands that had shunned them in the past. It’s hard to ignore the success the Cayenne has had though. The Bentley currently owns the SUV segment over $200,000. The market will get very crowded with six-figure SUVs in the next three years. It’s anyone’s guess what that market will look like and what the ceiling is but based on the Bentayga, Bentley has only scratched the surface,” Sullivan said.

I had the chance of driving the Bentayga here in England recently and it oozes quality and money. When you open the door the smell of the best quality wood and leather hits you. Everything around you is pure class. The “organ stop” devices which control the air conditioning vents are beautifully made. The analogue clock in the centre of the dashboard glints in the sunlight. No surprise because it’s a Breitling with “a light mother of pearl face” according to the options list. The wood and leather are the result of many hours of top flight craftsmanship at the factory in Crewe, north-west England, which unlike most modern car plants is actually full of highly skilled people and low on robots.

The 600 hp motor blast this behemoth from rest to 60 mph in 4 seconds. There is an 8-speed automatic gearbox. Press the starter button, and the 12 cylinders ignite a spectacular high-pitched whine which quickly settles down into an ominous whisper. There is a diesel V8 available and a hybrid is coming. No word yet on an all-electric version. When you visit the local horse show, you should add the folding event seat which slides out from the back. Or if you’re a prince from the Middle East, you can order the Bentayga Falconry, by Mulliner (see gallery).

If you’re wondering why Bentley engineers settled on 187 mph for the top speed, that adds up to 300 km/h in most of its markets.

Charismatic or ugly?
The Bentayga felt a bit floaty on the road but held itself amazingly flat through winding and tight high speed curves. The steering was beautifully weighted and a delight to use. There are so many drivers’ aids that it would take an intensive course to find them all, but I did push a button and stumbled on the “head-up display. That projects speed limits and sat-nav instructions above the hood without having to take your eyes off the road.

I tried hard and found some faults. The indicators didn’t make enough noise and I occasionally left them pointing either left or right by mistake. That might have induced some rage by following, class war warriors. And once, when slowing down for a junction, the Bentayga’s computer detected some non-existent hazard, and tightened my seat belt so hard that it felt like someone had punched me in the chest.

The styling has been controversial with admirers saying it has presence and charisma, while detractors call it downright ugly.

“It doesn’t do enough to stand out in a sea of crossovers here in the U.S. It blends in too well at the Whole Foods parking lot,” he said.