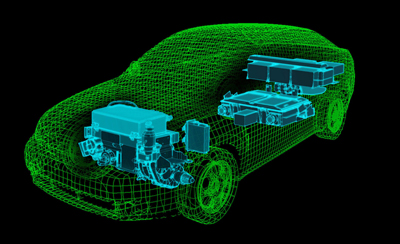 Unreliable Range, No Environmental, Cost Or Efficiency Advantage
Battery-Only Is Being Driven By Politics, Not Economics

It’s nearly time to put up or shut up.
At the end of September, battery-powered electric vehicles will the toast of the biennial Paris Car show. France’s Renault, the most vocal European manufacturer leading the charge to battery powered cars, will be parading its electric credentials and is ready to start selling the electric Fluence next year. You can bet that its stand at the Paris show will repeat the “zero emissions” mantra countless times. Renault’s Japanese affiliate Nissan will launch the Leaf in the U.S. later this year and Europe early in 2011. Mitsubishi of Japan has already launched its MiEV battery car in Europe, and Peugeot and Citroen of France will shortly begin selling their versions of this car.

By the time the next big European car show takes place – in Geneva in March 2011 – the motoring public will finally have some experience of the reality of paying for and living with battery-only electric cars. The move from hype to actuality will not be a pleasant experience.

The first evidence of battery-power reality will be an enormous increase in call outs for road side assistance as electric motors expire miles from home. The second will be a scary rise in accidents, as frustrated truckers overtake electric cars crawling home on highways, like the tired old milk floats of yesteryear. The silence of battery cars will lead to more pedestrian deaths and squashed pets.

Recently, Britain’s state-controlled BBC, quoting electric car maker Mitsubishi, said the cost of ownership of battery cars is actually more than regular cars when you figure in depreciation, so the argument about running costs is lost. The transmission of electric power from generation to use is enormously inefficient, with some experts saying only just over 30 per cent of the original power is actually available for use, the rest draining away during transportation; so much for increased efficiency. The power generated mainly comes from coal fired power stations so the zero emissions claim goes out the window, although in France, where upwards of 80 per cent of electricity is generated by nuclear power, this claim does resonate.

Rich, early adopters
The price of battery cars puts them out of the reach of all but a few rich, early adopters. Visitors to showrooms will find themselves asked to buy a car with a sticker price more than twice what you would expect to pay for a small family car, but which also has limited and unpredictable range.  This scenario is less oppressive for plug-in hybrids and extended range electric vehicles, which at least can function when the batteries run dry. So why are some manufacturers betting the ranch on a product that will look incompetent compared with green competitors like hybrids? They are being pushed down this route by governments armed with massive subsidies, and which maybe haven’t looked much past the hype.

“None of this has been costed in the way a motorist would need to do so. For the foreseeable future the electric vehicle isn’t going to be viable, except perhaps as a commercial vehicle,” said Professor Garyl Rhys.

Rhys, President of the Centre for Automotive Industry Research at Cardiff University, points out too that on-the-road fuel economy, as measured by emissions of carbon dioxide (CO2), is not much better for battery cars than for small, modern diesel or gasoline engines. Rhys said a little Volkswagen Polo diesel is rated at 99 grammes of CO2 per kilometre (g/km), a gasoline Toyota Aygo at 108 g/km, while a battery vehicle which uses electricity generated by coal scores 122 g/km, 86 g/km if oil is used, and 53 g/km from natural gas power. A car emitting 120 g/km achieves about 46 miles per U.S. gallon, 100 g/km is about 55 mpg, and 80 g/km is the equivalent of 69 mpg.

Not the way ahead
Politics is behind the surge of interest in battery-only power.

“The European Commission has got the bit between its teeth as far as electric vehicles are concerned.  Even though they are not the way ahead, manufacturers feel they have to go down this route,” Rhys said.

The Brussels-based European Commission is the executive body of the European Union, responsible for proposing legislation, implementing decisions, and the general day-to-day running of the E.U.

And not just the European Commission. France has offered substantial subsidies not only for buyers of electric cars, but to electric utilities to set up a recharging infrastructure. U.S. politicians have set ambitious targets for auto electrification. Germany wants one million electric cars by 2020.

Rhys agrees that plug-in hybrids like the new Toyota Prius, which will soon have a range of about 25 miles in battery-only operation but which can then be driven by a mixture of an internal combustion engine and electricity, or the Chevrolet Volt, a so-called Extended Range Electric Vehicle (EREV) which also has substantial battery-only range but also a small gasoline motor to charge the battery, offer range comparable to current gasoline or diesel engines. They don’t threaten the dreaded “range anxiety”.

“I think a lot of politics is involved in full electric vehicles. Why buy an electric vehicle, when the other (green) choices would appear to be a much more reassuring option for the vehicle buying public. There’s still going to be many, many years of life left in the internal combustion engine, albeit alongside batteries or fuel cells or whatever. Internal combustion engines, despite all the hype are not on the verge of disappearing and most people expect it to still be very much in use in 2050,” Rhys said.

Gather momentum
Professor Ferdinand Dudenhoeffer of the Center for Automotive Research at the University of Duisberg-Essen in Germany agrees that battery only cars, not to mention hybrids, plug-ins and EREVs won’t make much of an impression for a while, but will start to gather momentum after 2015, and after 2020 he foresees a huge acceleration of vehicles which use electricity alone or use batteries to augment regular engines. Battery only cars though will likely remain a niche, urban option at least until 2020.

“Extreme acceleration will start after 2020 because of big scale economies. We will see cost reductions and battery technology improving. We will also see the price of oil will be rising and more and more taxes from governments (on internal combustion engines) for emitting carbon dioxide,” Dudenhoeffer said.

Cardiff University’s Rhys agrees that developments in battery technology and price are essential, but doesn’t see much progress on the horizon.

“I can’t really see electric vehicles before 2025 having much of a market share until you start getting really viable batteries. That’s what we await; the long promised breakthrough in energy storage of batteries and the charging infrastructure. As for an energy storage breakthrough, there’s nothing on the horizon before 2025,” Rhys said.

No business case
Peter Schmidt, editor of pan-European newsletter Automotive Industry Data, agrees that battery only cars have been hyped past the point where they make any sense to average buyers.

“Whichever way these cars are looked at today, there simply isn’t a business case to be made. The average consumer will not even be tempted. At best, almost regardless of price, a few will probably be sold to mainly companies who may be willing to trade-off an electric car’s sky-high price for a green halo,” Schmidt said.

“For at least a decade, electric cars are clearly not what consumers will choose to buy. The future is electric, but not any time soon, or for this matter funded by tax-payers,” he said.