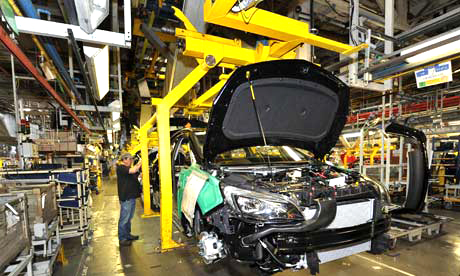 Americans might think first of “fiscal cliff” when talk turns to 2013. For European auto manufacturers the word association is more likely to be “nightmare”, “headache”, “government bailouts” or even “bankruptcy”.

That’s because European car sales are likely to be down again in 2013, close to 20 year lows, thanks to the economic recession. The Organisation for Economic Cooperation and Development reckons the 17-nation zone which uses the “euro” common currency will slide by 0.1 per cent in 2013, after 2012’s 0.4 per cent dip, before awakening in 2014 with 1.3 per cent growth. And despite Germany, Europe’s biggest economy, showing signs of revival, even mighty Volkswagen might not be immune to the pain being suffered by its mass market competitors led by France’s Peugeot-Citroen.

Latest data from Germany shows its economy may take a turn for the better in 2013, as the respected IFO business confidence index rose for the second month in a row in December. Business leaders believe this might lead to a rebound in economic growth in the first quarter, despite  the Bundesbank projection that the German economy likely contracted by 0.25 per cent in the fourth quarter compared with the previous three months. But even if German starts to revive, its exports to flagging economies like France, Spain and Italy won’t be setting new records.

“I’m convinced that 2013 will be the toughest year since Greece joined the E.U. (in 1981) and even VW will not be smiling,” said Professor Ferdinand Dudenhoeffer of the Center for Automotive  Research (CAR) at the University of Duisberg-Essen.

CAR’s latest research shows sales in Western Europe will slide another 3.4 per cent in 2013 to just over 12 million, after falling 7.9 per cent in 2012. Forecasters like Citi Research reckon this underestimates the weakness next year and sees a fall of between five and six per cent.

Revival
CAR data calls for something of a revival in 2014 and 2015, with rallies of 4.5 per cent and 3.4 per cent. But at the end of next year, car sales in Western Europe will be 3.5 million less than in 2005, and that underlines the biggest problem; over-capacity.

Volkswagen, Europe’s biggest car maker with a market share of close to 24 per cent, is hugely profitably globally, not least because of the great success in China of its luxury subsidiary Audi. But despite being on the crest of a sales wave, its latest new car the Golf, has needed hefty discounts to persuade buyers to part with cash because of tough market conditions. Usually a new car will command high profit margins, at least until buyers see a few on the roads. Not this time.

“VW launched the Golf (Mark Seven) with incentives in Germany and Austria and possibly other markets. It’s the first time that this has happened,” Dudenhoeffer said.

Dudenhoeffer also sees manufacturers’ finances deteriorating to the point that governments may be forced to step in with assistance. Because of the recession, all the non-German domiciled mass market manufacturers are deep in the red.

Most perilous
Ford’s European subsidiary is expected to lose $1.5 billion in 2012, and a similar amount next year. GM Europe’s Opel-Vauxhall, which has lost $16 billion over the last 12 years, is looking at another $1.5 billion loss in 2012. Fiat’s European operation is expected to blow close to $900 million this year and the same again in 2013. Renault, owned 15 per cent by the French state, is barely breaking even at best, while compatriot Peugeot-Citroen, in which GM has a seven per cent stake, is in the most perilous condition and is looking at a loss of $1.9 billion in 2012. The French government has enraged some fellow members of the European Union with a bail-out of Peugeot’s financing arm, with guarantees of up to more than $9 billion. It goes without saying that France’s socialist government extracted concessions from Peugeot which will limit its freedom of action to sort out its long-term problems.

“2013 will be the year of bail-outs and state help. The French government has already started with Peugeot-Citroen, and we will see more,” Dudenhoeffer said.

Dudenhoeffer expects so-called Southern Europe countries  – including France, Spain, Portugal, and Italy – to suffer the most and he expects between 20 and 30 per cent of medium-sized suppliers there to be forced to close.

John Wormald, analyst with British automotive consultancy Autopolis, sees VW remaining in good shape, the Koreans Kia and Hyundai too. There are ominous clouds though hanging over Peugeot-Citroen, and perhaps even Opel-Vauxhall too.

“The Eurozone is in poor shape on average with the North better than the South. VW and the Koreans will continue to grind the faces of the others, off their big Asian/Chinese profits. I think Peugeot-Citroen could go under. Opel might not survive, either, depending on how far GM is prepared to prop it up,” Wormald said.

Leave the dance-floor
What needs to happen in Europe if the weak are to become contenders again?

“One or more needs to leave the dance-floor. And France and Italy really need to make themselves more competitive business locations,” Wormald said.

Ford Europe, Peugeot-Citroen and Opel-Vauxhall have already announced plans for job cuts and plant closures, but more swingeing measures are likely before the recession is over.

Max Warburton, analyst at Bernstein Research, described Europe’s prospects as a “nightmare”, and despite massive profits for the so-called premium brands BMW, Mercedes and Audi in China, even these thoroughbreds struggle to make money in their home markets.

“China, … again is pretty fabulous place to be selling cars. That can’t be said about Europe. Even the premium brands are struggling and probably making little in the way of money. For the volume manufacturers in Europe it’s gone from bad to worse to potentially fatal,” Warburton said.

Morgan Stanley analyst Edoardo Spina worries that globally, auto manufacturers have let stocks get out of control, but particularly in Europe.

“Europe remains the key headache, but stock has also been rising in the U.S., Brazil and China. We are surprised that a wide range of extended shutdowns have not been announced in Europe this month,” Spina said.

CAR’s Dudenhoeffer pointed out that even though sales prospects are dire, there will still be a steady flow of new cars next year to excite the remaining buyers. Highlights include the new Jaguar F-type sports car, Ford’s compact SUV the Kuga, the Opel-Vauxhall Adam city-car, and the BMW Mini Paceman. Later in the year expect the new BMW 3 series GT, BMW 4 coupe and BMW X5, and towards the end of 2013, the BMW i3 electric car. Perhaps the highlight of the year will be the new Mercedes flagship S class in the summer.

“2013 will be the year of Asia and America. With the exception of premium car makers, the Europeans will suffer and Toyota, Hyundai-Kia will continue to grow faster,” Dudenhoeffer said.