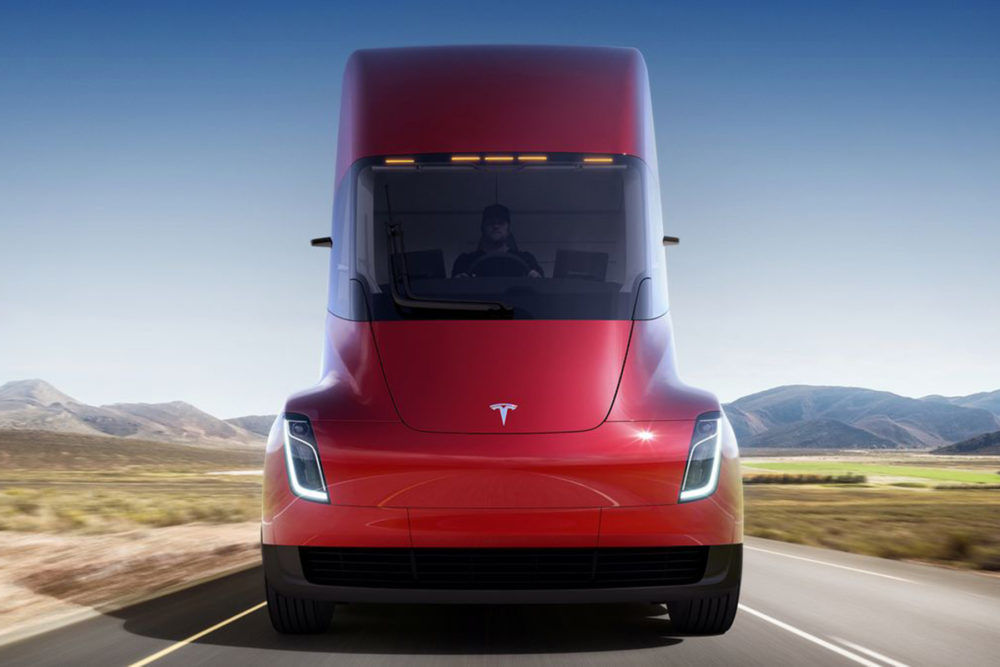 “some aspects were unconvincing. Musk said the truck would be available in 2019 and the sports car by 2020, which seems impossible”

Tesla Inc grabbed the headlines with the expected launch of its electric truck, then astonished shareholders when the Semi disgorged a new super $250,000 roadster, but cynics worried that this just diverted attention from troubles with Model 3 production which need to be solved if the company is to survive.

Investment researcher Evercore ISI tried to balance its view, saying even the expected new truck had a surprise element – 500 mile range at highway speeds and max permissible gross weight – while the sports car blind-sided everybody.

“For the bulls, the event supports the view that Tesla produces innovative, re-defining and disruptive products with great design and technology at the core,” Evercore ISI analyst George Galliers said.

“For the bears, long-term detractors have ridden out similar eye-catching reveals in the past. Bears will be cognizant of the capex requirements to bring both products to market and their respective margins – note, no mention of gross margins so far,” Galliers said.

Investment researcher Jefferies was a bit more sceptical, saying the truck concept didn’t reveal key details, like battery longevity, which will determine depreciation to reliably work out the total cost of ownership compared with the diesel competition.

Reservations
Tesla said it was taking $5,000 deposits for the truck and will being taking $50,000 reservations for the sports car.

Houchois said the 500 mile range was higher than he expected and more than double what truck competitors have disclosed, and Tesla hinted at the possibility of 400 miles of recharging range in 30 minutes through a “Megacharger”, of which no details were given.

“CEO Musk addressed the issue of battery life, which is critical to the economics of trucking, claiming 1 million miles, similar to current diesel trucks, although we question 1) longevity given additional strains from load and 2) the ability to rely on single-gear transmissions. Claims of TCO (total cost of ownership) more than 20% below diesel do not add up to our understanding of truck running costs,” Houchois said.

“We estimate an electric truck with Tesla’s specs would cost at least $135,000, 35% above similar diesel trucks,” he said.

Morgan Stanley was convinced, saying the new truck topped most of its expectations of performance, cost savings, capability and time to market.

“The Tesla truck appears to best current diesel truck performance in almost every measurable way. Even fully loaded, the most important metric – the range – comes in at 500 miles, comfortably topping our expectations of 200-300 miles,” Morgan Stanley analyst Ravi Shanker said.

But Shanker had questions about the size of the battery, and possible launch partners, which weren’t announced.

Reuters BreakingViews columnist Richard Beales liked what he called Musk’s new way of raising capital, although he acknowledged the argument also that the publicity would also distract attention from Model 3 production problems.

Handy, cost-free
“Down-payments for cars that won’t be delivered for years are, however, a handy source of cost-free working capital. The 1,000 special “Founders Series” Roadsters, if all pre-ordered right away, would only bring in enough to cover about three weeks of cash burn at the 2017 pace to date. Orders for the regular version of the sports car, with a $50,000 reservation fee, could further add to Tesla’s pot – with $686 million of customer deposits already on its balance sheet at the end of September,” Beales said.

Wall Street Journal Heard on the Street columnist Charley Grant went for the distraction theory too, saying whether Tesla can actually produce and make money on its mass-market Model 3 is a less exciting but far more important topic.

“But, some aspects of the plan were thoroughly unconvincing. Mr. Musk said the truck would be available in 2019 and the sports car by 2020, which seems impossible given the company’s significant production issues,” Grant said.

“And some key details about the feasibility of the truck project were missing altogether. Mr. Musk didn’t say how much the truck will weigh, for instance, or what its price would be,” he said.

Evercore ISI’s Galliers also thought the truck and sports car project would distract management from the all-important Model 3 project, but conceded that there were juicy revenue prospects.

NordLB’s Schwope, in a research note initiating coverage of Tesla, said investment in the company was an extreme bet on the future. He doubted if 500,000 Model 3s would be produced next year, or profits would show by 2020.

“As a big mistake, we consider the fact that Tesla or Elon Musk does not focus on a few important things,” Schwope said.

“One wonders what happens first: that Elon Musk flies with SpaceX to Mars, or that he writes black numbers with Tesla. We record the coverage of Tesla shares the investment recommendation “sell”,” Schwope said.