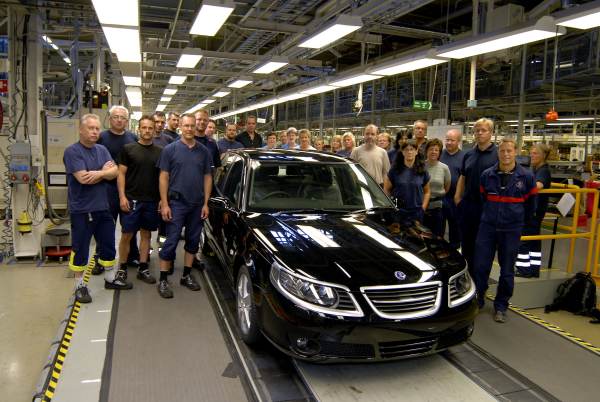 Things look bleak for Saab, but the one remaining straw to clutch on might be if General Motors decided it would be wrong to waste the huge investment which has bought the flagship 9-5 close to a global launch, while other products in the pipeline will soon be ready to roll.

Saab management has also hinted that the breakeven point has been slashed to about 110,000.

“We can make good money now at 120,000 (cars a year),” Knut Simonsson, Director of Global Brand and Sales, said in October. Production has now been concentrated on the Swedish plant to cut costs.

After supercar maker Koenigsegg said it was backing out of the deal to buy Saab from GM, it seemed that the Chinese connection might save the Swedish wannabe premium car manufacturer.Beijing Automotive Industry Holding Corp of China took a minority stake in Koenigsegg to help the deal progress.

Saab’s new 9-5, set for launch in the New Year, is based on GM’s new Epsilon 2 platform, which is also used in the Opel Insignia and Buick LaCrosse. The current Saab 9-3 uses the old Epsilon platform.

“The problem is that Beijing will be interested in the one thing it is unlikely to get its hands on – the technology from GM – and is therefore unlikely to reach an agreement and prevent the Saab brand from disappearing from the automotive landscape,” Global Insight analyst Paul Newton said.

Clashes with Shanghai Automotive
“BAIC no doubt wanted access to this technology and crucially planned to open up Saab distribution in China, where GM has an extensive and highly successful joint venture with BAIC’s rival, Shanghai Automotive. GM sells large numbers of both platforms in China under the Buick brand and it is unlikely that GM would view BAIC’s involvement as positive in this light,” Newton said.

Newton said GM’s newly strengthened position after the U.S. bailout explained its decision to hold on to Opel, and means it will likely resist a deal with BAIC.

“New GM is not prepared to sell its intellectual property to all-comers for the sake of some short-term gain,” Newton said.

Many observers wondered why a company like Koenigsegg Group AB with 45 employees making about 20-odd $1 million supercars a year, wanted to buy loss-making Swedish car maker Saab. Koenigsegg never did spell out what it would gain from owning Saab.

Saab had always wanted to charge prices for its cars as if it was a BMW, an Audi or a Mercedes, but was never able to generate the brand power to pull that off. Its strongest claim to fame was that its brand was so neutral, so bland, it wouldn’t annoy people like a BMW might. Its most impressive technology differentiator; Saab pioneered turbocharging of smaller petrol engines. And the ignition switch is located between the front seats.

Stark choices
News that Koenigsegg had pulled out of the deal to buy Saab from GM left some stark choices. Would GM close it down? Are there any buyers out there? Will GM try and keep it going?

The latter choice might be persuasive, because Saab is about to launch its new top-of-the-range replacement for the 9-5.  The new 9-5 features an all-turbo charged group of engines, harking back to the Saab speciality. The most remarkable sounding engine in the new range is a tiny 1.6 litre which produces 180 hp, and propels this very large machine from rest to 62 mph in 9.5 seconds, while producing about 37.2 mpg-7.7 l/kms. And Saab had planned to launch 3 more cars in 18 months – the next one being the new 9-3.