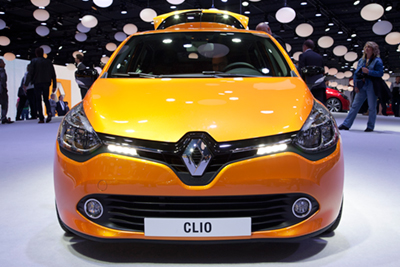 Renault Ahead Of Competition Financially, Thanks To Dacia
How Did Renault Manage To Move So Much Output Away From Europe?

“It may lack glamour, but the new Logan could be the most important model on show in Paris,”

Most European mass car manufacturers, with the exception of VW, are losing huge amounts of money, but Renault has been impressing investors with its ability to at least come close to break-even in these turbulent times.

It came as a big surprise then to hear Renault CEO Carlos Ghosn, during the Paris Car Show, making negative headlines like news agency Reuters’ report “Renault could disappear if France remained weak.”

Ghosn was asked a question by a radio station at the show which asked if Renault was threatened with extinction because of the current crisis.

“In its current form, yes. Each company is tied to its home country. I do not know of any company that can be viable, that can prosper from a base that is not competitive. A company needs a natural base; Renault’s natural base is France” Ghosn said.

Investors are taking a much more positive view of Renault’s prospects, after Ghosn unveiled the new Clio IV at the Paris car show. They particularly like the contribution being made by its down-market Dacia subsidiary.

“We are becoming increasingly bullish on the Renault story. Despite a very adverse market environment at home the company continues to deliver on its targets. With the ramp-up of Dacia cars in Western Europe with the Lodgy and Dokker and the replacement of the Logan and Sandero at the end of 2012, early 2013, we believe Renault’s outperformance compared with Peugeot-Citroen and Fiat will accelerate,” said Commerzbank analyst Sascha Gommel.

According to Gommel, the new Clio will have fixed costs 50 per cent lower than the previous model, because of a leaner production footprint, more use of common parts with Dacia, and reduced complexity. Gommel expects pricing to improve too, which means Renault has a good chance of delivering its target of a two percentage point improvement on the Clio IV’s profit margin.

Noisy drummers
At the show, Dacia unveiled a new Dacia Logan saloon and Sandero hatchback, preceded by a group of drummers which must have made enough noise to contravene health regulations.

Morgan Stanley analyst Laura Lembke sees the Clio launch as the start of new product offensive and reckons Dacia could be more profitable than Mercedes.

“The new Clio marks the start of a powerful product offensive that drives Renault’s average product age to an industry low of just two years by 2015. The new Clio is the first to be built predominantly outside France. Some 60 per cent of Clio IV will ultimately be built in Turkey, leaving 70 per cent of group production outside Europe. Utilisation of capacity remains low, but may be addressed as momentum builds towards E.U.-wide capacity cuts,” Lembke said.

Observers wonder how Renault, 15 per cent owned by the French state, has managed to do this, while privately-owned Peugeot still has much production left in the country and is taking harsh criticism from the Hollande administration as it attempts to do a Renault.

Lembke said the Clio should at least stop losses at the Renault brand, while Dacia could make profit margins of around nine per cent.

“Average selling prices (for Dacia) may only be a quarter those of Mercedes but with low cost production, low dealer margins, no discounts and generous price points outside Europe, (Dacia) proves that you don’t need a German luxury brand to make close to an estimated nine per cent margins by 2013. It may lack glamour, but the new Logan could be the most important model on show in Paris,” she said.

Lembke also believes Renault is on the right track.

“We believe (Renault’s policy) reflects its gradual transition from Euro-centric underdog to genuinely competitive global player. We think this transformation has much further to go,” Lembke said.

Renault best placed
Citi Research analyst Philip Watkins wasn’t so sure that the Clio would be able to gain sales, as its big rival the Peugeot 208 has also just been renewed. But he likes the direction Renault is taking, not only selling more Dacias around the world, but using parts for Renaults as well.

At the show, Renault-Nissan unveiled plans to share gearboxes with Mercedes and develop compact engines expanding their partnership. Mercedes will develop a new range of petrol engines with Renault and license its automatic transmissions to Nissan and its Infiniti brand.

Output is expected to run to more than three million four-cylinder engines.

It’s just as well that Renault’s success with Dacia has been such a success. The trouble for Renault is that its €4 billion pet electric car project is stumbling in the recession.