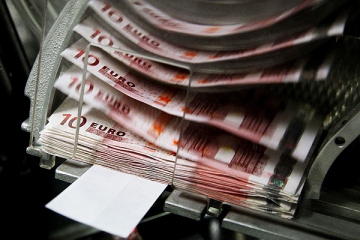 “industry on the threshold of escalating opportunities” ? Dream On
Only Nissan Is Making Money, Thanks To Qashqai And Juke

MONTE CARLO, Monaco The leaders of Europe’s automotive manufacturers are too smart to be complacent, so it’s probably best to describe their confident public utterances as the crisis grips as showing their buoyancy or stoicism. In Britain this used to be called a “stiff upper lip”.

But industry leaders at a conference here this week organised by Automotive News Europe, even though it was sub-titled “Building Resilience in Turbulent Times”, showed remarkably little inclination to acknowledge the crisis being faced by European car manufacturers, the ones that aren’t native German that is. Sales are plummeting. The problem of excess capacity looms ever larger, and the flow of red ink threatens to become a tsunami. Deutsche Bank, in a new report, said European manufacturers were running at only 72 per cent of capacity, compared with 80 per cent before the current crisis struck. Even at this lower rate, too many cars were being produced, and factories would have to scale back output in the third quarter, the bank said.

French manufacturers are openly calling for more government bailouts, even though the last one happened barely a couple of years ago, in the form of cash-for-clunkers subsidies. One French newspaper reported that the new administration of French Socialist President Francois Hollande was planning to introduce a tax on larger luxury cars, disguised as an extra levy on high fuel consumption. That would scupper the Germans, but would most likely fall foul of European Union rules. Worst case scenarios call for a breakup of the E.U.’s single currency, the euro, which would undermine the free trade aspect of the European project.

So it was a bit of jolt to hear Volvo CEO Stefan Jacoby talk at the conference about how the industry was on the threshold of escalating opportunities. Zhejiang Geely Holding Group Co of China bought Volvo from Ford Motor Co a couple of years ago for $1.8 billion. The Chinese then lured Jacoby from Volkswagen of America to head up their new venture.

Sales down eight per cent
Carlos Tavares, Chief Operating Officer of France’s Renault, acknowledged that sales in Western Europe were down eight per cent so far this year, and were twice as bad in France. Tavares reiterated his interest in seeing support for the car market from governments, but his presentation concentrated on how Renault would succeed long-term.

Philippe Varin, CEO of France’s PSA Peugeot-Citroen, was a no-show at the conference, but he has been a vociferous advocate of government subsidy to pay for painful plant closures. Varin wants this led by the European Union because national governments find it impossible politically to close factories and create unemployment, even though this is often the only way to restore long-term health.

Earlier this week Varin was the subject of speculation in the French media suggesting he was under pressure from the family owners of the firm because of Peugeot-Citroen’s shaky finances. The Peugeot family were also said to be unhappy with Varin’s alliance with General Motors, which now has a seven per cent stake in the company. Later the company denied the reports.

Avert gaze
Most speakers at the conference tried to avert their gaze away from short-term murky problems and contemplate long-term sunlit uplands.

Except for Max Warburton, that is.

Warburton is an analyst for stock-brokers Bernstein Research of London, and rocked delegates with a no-nonsense look at the state of the European industry. Warburton reckoned that Fiat of Italy, and the two French companies Peugeot-Citroen and Renault would account for two billion euros of losses in Europe this year. He didn’t include Ford Europe and GM Europe, which are also expected to notch up about  one billion euros worth of losses in 2012. VW, market leader in Europe, was the only profitable mass market participant in Europe, but even this German powerhouse was only making wafer thin margins there. But of course VW’s China business, and its premium subsidiary Audi, were in rude health. Nissan of Japan is also making profits in Europe, selling large numbers of Qashqais and Jukes out of Britain, thanks in part to its sliding currency.

Warburton said the native German manufacturers had benefited hugely from  participation in the euro single currency, and didn’t see how the French and Italians could turn this around.

“The strong will get stronger and the weak will get weaker and it’s hard to see how the non-Germans fight their way out of this corner,” Warburton said.

Volvo’s Jacoby, looking at long-term trends in a speech, said electrification and internet connectivity were important, and it was worrying that young people were losing interest in cars.

“These kids may not want to buy a car. That’s different from my generation. Being connected is more interesting than being mobile. Constant connectivity is the thing,” Jacoby said.

The idea that the young people are not interested in cars has become a mantra in the industry, although it remains to be seen if this will change after a few years of economic recovery when car ownership becomes relatively cheap again and a possibility for those on smaller incomes.

Volvo V40
Jacoby also said modern cars are too complicated, with 75 per cent of owners unaware of all the vehicle’s possibilities. It was a Volvo priority to make new cars more intuitive to operate. Volvo is about to launch a new version of its V40 sedan, which was on display at the conference.

Other speakers tried to shed light on long-term trends. The idea that cars might be able to drive themselves would have a big impact on eliminating accidents. This would have the unintended consequence of bankrupting many small car repair businesses. The fact that currently, despite powerful technology, it was still impossible to talk to the driver of a car in the next lane, raised the spectre of road-rage epidemics. One scenario talked about the possibility of congestion getting so bad as the world’s population moved into so-called mega cities and one billion cars became two billion by 2050, that 50 per cent of fuel would be consumed stationary in traffic.

Tavares reacted to criticism that Renault and its alliance partner Nissan had miscalculated the strength of battery only demand. Renault-Nissan has spent about $5.6 billion developing battery-only cars to meet its estimate that this will represent 10 per cent of the market by 2020. This estimate is about twice as much as most other companies. Critics have called this policy a “bet” on the future.

“This is not a bet, it is an insurance policy. Just wait until the oil price jumps,” Tavares said.

But the criticism is that Renault-Nissan has invested in the wrong thing – battery-only – when it is range-extenders like the Chevrolet Volt and latest Toyota Prius plug-in hybrid with their lack of range anxiety which will be the big winners.

Worst case scenario
Meanwhile away from the conference other voices were raised to point out that a revival of scrapping schemes, otherwise  known as  cash-for-clunkers, was not a good idea because it simply brought sales forward, according to Fitch Ratings. U.S. ratings agency Fitch also said because of the European economic and banking crisis, governments had little money left anyway.

Fitch said up front probably what the industry leaders at the conference were thinking.

“The sector remains on course for a sustained period of sales decline or stagnation in Europe, which could turn into a sharp drop in the worst case scenario of a euro break-up,” Fitch said.