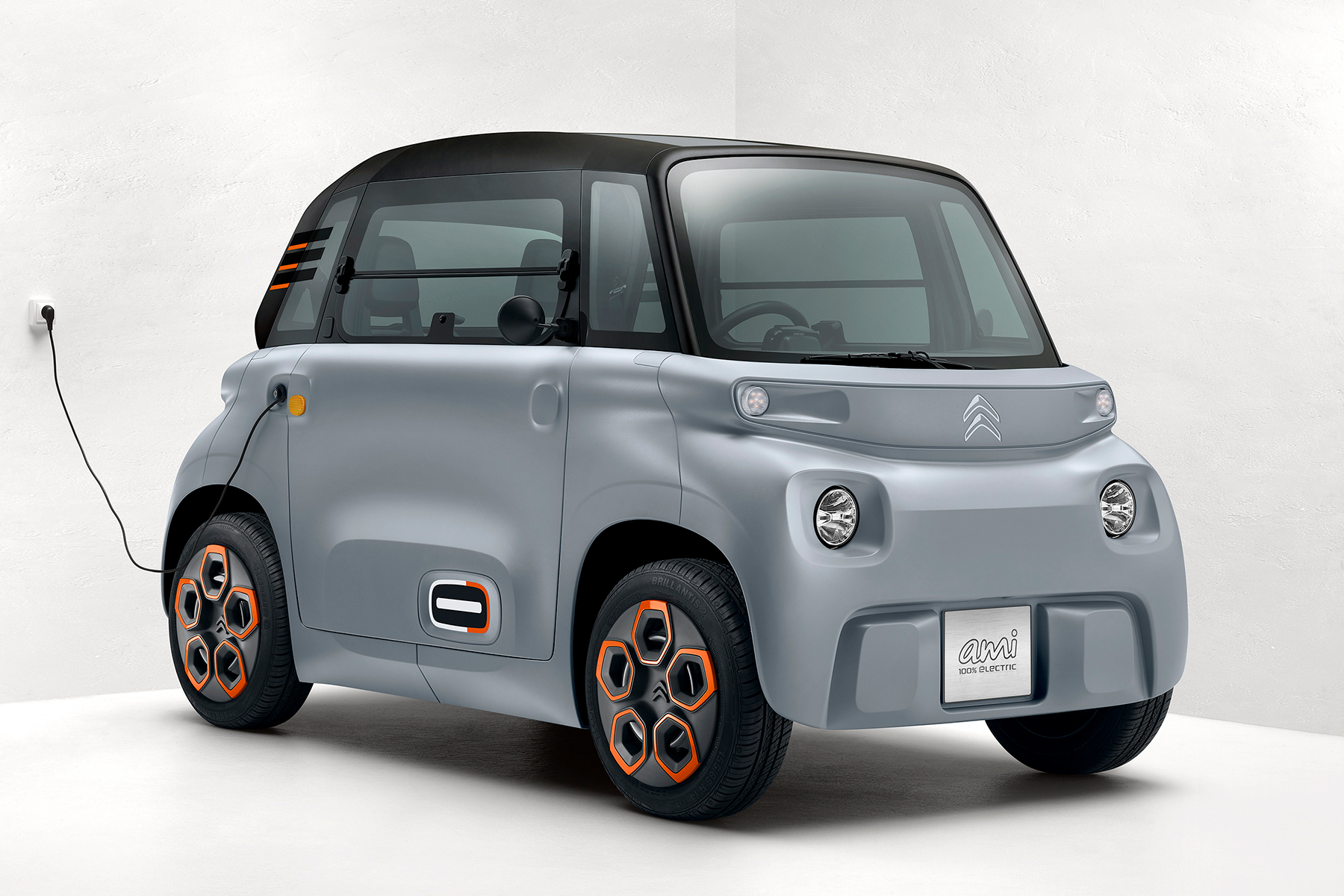 Mini-electric cars promise something that current electric cars are incapable of; buyers will want them, not because they are forced into them by governments

Grandstanding European politicians are accelerating the sales ban on petrol and diesel cars to 2030, paying scant attention to the unintended consequences, but maybe hoping mini-electric vehicles may bail them out.

The negative impact of bans, announced in Britain and expected in Europe, assumes electric cars will still be unaffordable to basic mass market buyers by then, but some analysts expect big improvements in technology and manufacturing to create at least a level playing field before that.

The ban by Britain provoked more questions than answers. Why suddenly impose a deadline of 2030; surely a gradual changeover would make more sense and do less damage to economies and people. And the relaxation for hybrids until 2035 prompted the thought; “just what is a hybrid?” Can U.K. factories still make ICE cars for export?

On Wednesday, British Prime Minister Boris Johnson announced the sales ban on internal combustion engine (ICE)-powered vehicles would start in 2030, after previously hinting at 2032 and compared with the original plan of 2040. Johnson announced this as part of a plan to cut CO2 emissions and fight climate change. France and Spain still have 2040 targets. Germany is still undecided. Expect action from them soon.

And the delay for hybrids was confusing. Does this apply to plug-in hybrids only, which can achieve up to say 45 miles on electricity only, original Toyota Prius-type hybrids with maybe a mile of battery only range, or mild hybrids, which use much electric power to raise ICE efficiency to amazing new heights. If the latter was the accepted definition, it would give the industry a reprieve and a massive boost. News Saturday ruled out mild hybrids but suggested regular hybrids will be allowed to be sold until 2035. The assumpton is ICE for expo;rt is still OK.

Torpedo mass market
The ban on ICE vehicles assumes an abrupt, efficient changeover to electric power, but battery cars and SUVs are still likely to be too expensive for average earners then and unable to handle normal high-speed long-distance driving. This threatens to torpedo the mass market for cars, bankrupting manufacturers, destroying highly skilled and highly paid employment right across Europe, and breeding discontent amongst voters as they are forced to take the bus. France’s “gilets jaunes” riots, prompted by a sudden spike in the tax on diesel, should be in the forefront of politicians’ minds.

Electric cars and SUVs remain hugely expensive, and at the lower end of the market probably twice the price of an equivalent ICE vehicle. An important reason for this is manufacturers’ mistaken determination to make their electric cars the exact equivalent of a traditional vehicle in terms of speed and utility. This requires big, powerful batteries. Unless they buy an upmarket vehicle like a Tesla, Audi e-tron or Jaguar I-Pace, this is impossible. If the electric car revolution is to succeed it must start from the ground up with products people want, rather than being forced into them. Electric cars need to be utilitarian and cheap above all, with a maximum price of say $5,000, not $35,000; ideal for shopping, the school run, commuting, that’s it.

Introducing Groupe PSA’s little Citroen Ami and the Hong Guang MINI EV, a two-door micro electric vehicle launched by a joint venture between General Motors and SAIC of China. Both probably selling for less than $5,000 after tax. Will these little cars be the saviours of the electric revolution?

So what impact will the British ban in particular and a European one in general have on car sales? Top forecasters like data provider IHS Markit have known for years that virtue signalling European politicians were threatening to ban ICE car and SUV sales. Its latest forecasts suggest the market share for battery electric vehicles in the European Union (EU) will rise from 2.1% in 2019, to 19.1% in 2025 and 30% in 2030. Plug-in hybrids go from 1.1% to 8.3% to 8.5%. But the scariest numbers for the industry are these. Hybrid electric (old Prius style), plus mild hybrids and ICE vehicles together account for 96.8%, 72.5% and 61.2% in 2030. If Europeans join the British ban, that will have unimaginable consequences for Europe’s auto industry, and one so destructive a change of policy direction seems unstoppable.

And if Britain’s ban sticks and it is joined by EU countries, the European industry will start shutting down development, then production from about 2025. That would have dire   consequences for the automotive workforce, carmakers and investors.

“The combination of a benign regulatory environment for electric cars (including considerable government subsidy) and shrinking production costs versus increasingly penalizing regulation for ICE car owners will likely lead to an accelerating downward spiral for ICE cars. This will likely weigh on ICE residual values in the 2nd half of this decade, if not earlier,” UBS analyst Patrick Hummel said in a report

Professor Ferdinand Dudenhoeffer, director of the Center for Automotive Research (CAR) in Duisberg, Germany, is confident the switch can be made seamlessly because of big progress expected in improving battery energy density coupled with significant cost reductions.

“There are anode materials in the form of silicon composites. This increases energy densities by a factor of 2 to 2.5. Cobalt is being replaced by Nickel. That will significantly reduce costs. And last, but not least, there will be the solid-state battery which will improve energy density and generate significant price reductions,” Dudenhoeffer said.

“Cells will get larger. Both BYD and Tesla and others are working on significantly larger cells. More energy density, less weight, better costs and, and, and. Tesla estimates more than 50% cost reduction for the battery and the vehicle structure for the battery by 2025. So, we don’t need mini or micro cars,” Dudenhoeffer said.

Kalghatgi, a fellow of the Royal Academy of Engineering and the Institute of Mechanical Engineers, said BEVs aren’t zero CO2 vehicles, primarily due to battery manufacture.

“There is significant scope for reducing the fuel consumption and hence CO2 emissions from ICE cars via better combustion, control and after-treatment systems allied with partial electrification in the form of hybridization and weight reduction. The ban explicitly discourages this because very soon research and development will stop. There is a grave danger this will destroy the U.K. automotive industry (and by implication the European too) and supporting business leading to significant job losses and economic, social and electoral consequences,” Kalghatgi said.

“I would not say that the mass market will be ruined, but certainly the acceleration on the adoption of greener cars will complicate things to the (manufacturers) operating in Europe,” Munoz said.

“We have seen already how some of them are facing problems to meet the 2021 (EU emissions) targets, with consequences on their balance sheets. Whatever bans the main source of sales, ICE today, must be accompanied with measures to help the car makers make the shift, the consumers not to lose the residual value of their ICE cars, and solutions to long distances trips that EVs can’t solve. Otherwise, the industry will be in trouble,” Munoz said.

Mobile phone syndrome
Mini-electric cars might not be able to handle long trips, but they do promise something that current electric cars are incapable of; they will be snapped up because buyers can see the point of them, can afford them and want them, not because they are forced into them by huge government taxpayer funded handouts. The mobile phone syndrome springs to mind.