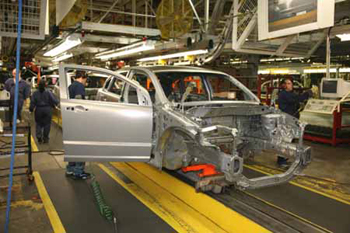 Europe’s car manufacturers put on a brave face at the Geneva Car Show, but the odds on there being some notable, permanent, absences this time next year are shortening by the day.

At the annual Detroit Car Show in January there were some high profile no-shows – Nissan, Mitsubishi, Rolls-Royce, Land Rover, Ferrari, Suzuki and Porsche. At Geneva, all the names were there, although the way things are going, there might be some blank spaces to fill twelve months from now.

But it is the names behind the scenes which are causing most concern. The European supplier base is in trouble and may need cash from mainstream manufacturers to ride out the storm. Unfortunately, that’s a commodity in short supply at the moment.

The standout, troubled manufacturer is General Motors Europe. Its German subsidiary Opel, British Vauxhall brand, and the Swedish stable-mate, up-market Saab, are in dire straits. GM Europe is seeking government bailouts to stay alive as the cash runs out. Saab has already filed for protection under the bankruptcy laws.

The European Car Manufacturers Association, known by its French acronym ACEA, believes sales in Western Europe will fall another 20 per cent in 2009, according to ACEA chief Carlos Ghosn. Ghosn is CEO of the Renault of France/Nissan of Japan alliance.

Positives
If you look a bit closer, you can find some positives for the industry, although none look very strong after close scrutiny.

Car sales in Germany, Europe’s biggest market, actually rose in February by 21.5 per cent, following the German government’s initiation of a scheme to award €2,500 ($3,200) to those handing in 10 year-old vehicles and buying brand new ones. This has tilted the market towards the cheap end of the market, favoring cut-price Korean imports like Kia or Hyundai, and Romanian made Renault Logans. Inevitably, this is also stealing car sales from the future. This helped limit the Western Europe sales decline to 17.7 per cent in February, J.D.Power said.

Bernstein Research of London has spotted some other positives.

Failing economic demand around the world has reversed the trend for raw material prices.

“As one of the world’s largest users of steel, aluminum, plastics and copper, the auto industry had to absorb massive input price rises – as peak demand and speculation drove material costs to unprecedented highs,” said Bernstein Research’s Max Warburton.

Key to breakeven
“Falling raw material prices will provide substantial benefits in 2009. While the benefits will not be enough to save the day, they are large enough to provide a significant offset. This potential positive seems to be overlooked at present but may prove key to manufacturer hopes of returning to breakeven in 2010,” Warburton said.

Bernstein also believes scrapping schemes like Germany’s will soon be Europe wide. France and Italy have also joined in. Britain may do so shortly. This will benefit small carmakers like Peugeot-Citroen and Renault of France, Italy’s Fiat, and to a lesser extent VW of Germany.

But experts agree that Europe has a structural overcapacity of at least 20 per cent, and that before the current prolonged and nasty recession is over, some companies will be forced to close.

“In Europe, there will be one national champion in France, one in Italy, one volume manufacturer in Germany – VW, plus Ford Europe, and two cooperating premium manufacturers Mercedes and BMW,” said Landmann in an interview at the Geneva Car Show.

Goodnight Vienna
That suggests Renault or Peugeot-Citroen will bite the dust, and it’s goodnight Vienna to Opel/Vauxhall and Saab. Fiat of Italy, now talking about assuming a 35 per cent stake in Chrysler, would hang on. Ford is looking to sell its Swedish subsidiary Volvo, without much expectation of success. Indian-owned Jaguar Land Rover is marginal too, but looks safe for now.

Meanwhile negotiations continue to find a way of saving GM Europe. Company president Carl-Peter Forster said in a press conference at the show that if GM Europe went down, the ripple effect on unemployment might reach 300,000 across Europe, if it ran out of cash next month. Forster wants to spin-off GM Europe to investors, and is seeking a 3.3 million euro ($4.2 billion) rescue package from European governments, mainly Germany, with help from Britain and Spain where the company has plants. Given the paucity of private investors, this is likely to generate a GM Europe majority-owned by various countries.

Negotiations continue, but without generating much sense they will succeed.

“Government should make sure they are adhering to strict criteria when asked to subsidize the Opels and Saabs of this world. They must show a sustainable business plan. Can it be implemented? Why aren’t private sector investors interested? If it was salvageable, investors would be there,” Landmann said.

“And most importantly, if Opel gets it, who is next,” said Landmann conceding that the political decision was particularly difficult in an election year. German federal elections are scheduled for September.

According to Peter Schmidt, editor at AID, actual production in factories around the world reveals an alarming crisis.

Extremely ugly
“January’s global car production is running at less than half of last year’s level and is yet another clue that this is certainly no ordinary recession. Likewise, today’s genuine consumer demand for new cars is running at half of last year’s level at best. If that same trend continues through this year’s second and third quarter, things will start to look extremely ugly,” Schmidt said.

“Today’s true underlying demand for new cars is probably just a fraction of accustomed normal historical levels. Certainly there must be few people in the real world worrying about their employment prospects who would want to buy a car now,” he said.

But it is the supplier part of the automotive business which might trigger a devastating tsunami of failure through the global industry.

Credit Suisse analyst Arndt Ellinghorst said manufacturers, already strapped for cash, may have to inject extra money into suppliers on the brink of insolvency.

Supply chain pain
“The industry might have to think about creating an E.U. wide supplier fund, similar to the 600 million euro ($760 million) fund already in place in France, where each car manufacturer pays into depending on size,” Ellinghorst said in a report called “Supply chain pain”.

Ellinghorst quoted three CEO’s at the Geneva Show who agree that supply chain problems must be addressed.

“Renault’s Carlos Ghosn: We are very concerned about the supply base. This is probably one of the most worrying parts for the industry. Daimler’s Dieter Zetsche: The list of suppliers on watch is growing. That we have this list is helping us to act in a more preventative form. BMW’s Norbert Reithofer: If they (suppliers) went bust then our production would stop and not just ours, but lots of others too,” according to Ellinghorst.