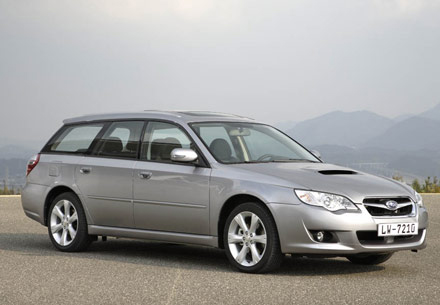 Subaru has finally added a diesel engine to its Outback permanent four-wheel drive estate car range, and a mighty impressive motor it is too, with one rather worrying potential drawback.

Subaru has retained its quirky “boxer” engine design for its first diesel. This means that instead of the engine’s four cylinders standing upright, one behind the other, they lie flattened, two on each side.

Subaru, which has championed so-called “boxer” engines for more than 40 years, describes the advantages like this. 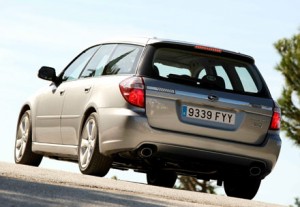 “Dedicated to the horizontally-opposed ‘boxer’ engine layout for over 40 years, Subaru engineers were determined to use this format for their first diesel engine. The reasons were to create a light, compact, strong unit with reduced vibration, noise and internal friction compared to an in-line engine and for an ultra-low centre of gravity. This enhances handling agility and road-holding – especially when combined with Subaru’s renowned symmetrical all-wheel drive system,” Subaru said.

I think it’s called “boxer” because the cylinders are somehow opposed against each other, but I couldn’t find any confirmation of that. Any input gratefully received.

The new 2.0 litre, four cylinder Boxer diesel was indeed a fantastic engine, providing smooth, quiet power which made it seem more like a 3 litre motor. It produces 148 bhp at 3,600 rpm, and 258 lb ft of torque at 1,800 rpm. That spells tremendous throttle response and almost instant pickup. On the highway, the car accelerated quickly in top gear without the need to change down. When you did use the gear box the pickup wasn’t electrifying, but it was very impressive. I did have a problem in second gear at low engine speeds, with a few clunky, embarrassing stalls to my credit. That was probably down to my lack of skills rather than any inherent problem with the car.

Subaru puts it this way. 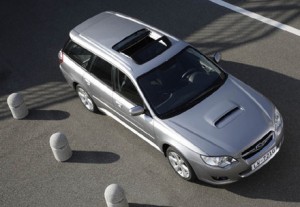 The first part of that statement is undoubtedly true. Unfortunately, the fuel economy on the car I drove was poor. Over a route of about 120 miles, mainly rolling along in top gear at between 50 and 60 mph on rural roads of Sussex, with about 30 miles of 80 mph cruising, the car could only achieve 31 mpg (9.1 l/km). That is so out of whack with Subaru’s claim, that there must have been some other reason. Perhaps the design of the fuel tank somehow scuppered my attempts to fill it consistently. The small mileage between fill-ups probably exaggerated the error. I would say check the fuel economy returned by other newspaper stories about the car, but sadly you’ll find that most car reviews will cravenly just recite either the manufacturer’s claims, or meekly regurgitate the car computer’s readout. Given that fuel consumption figures offered by manufacturers are merely the results of laboratory tests, with no road relevance at all, car buyers are not being well served with information on this subject.

Subaru says that it stands by its fuel economy claims. 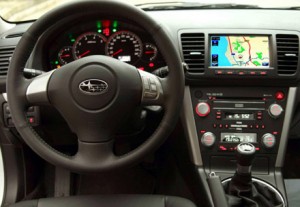 Meanwhile, the appeal of Subaru is in its almost Saab-like lack of brand edge. Think of it as the antithesis of the Range Rover. Like Saab, nobody ever bought a Subaru to make a fashion statement or raise their profile. It isn’t completely classless though; Subarus are firm favourites with the country set because of its four-wheel drive tradition, and reputation for rock-solid engineering and no-nonsense styling. To appeal to the green-welly crowd, there is a reversible cargo floor allowing a choice between carpets or a hard waterproof floor. I didn’t test the four-wheel drive ability, but Subaru’s reputation in rallying suggests it knows a thing or two about off-roading.

The diesel Outback body maintains its low-key tradition with its bland, anonymous, unfashionable looks which show no attempt to seduce buyers with any sexy lines at all. As my 91-year old step mother said when approaching the car “It’s a bit lumpy looking isn’t it”. Subaru has made a couple of concessions to fashion, with a newly designed front grille which gives the car a “chunky, lattice-effect look. It also has twin raised flutes to its bonnet and neatly integrated side protection cladding.”

Cloth, electric seat
The dashboard was practical and informative. The interior quality was impressive. The version I drove had a unique combination as far as my experience goes; it had a powered driver’s seat upholstered in cloth. Every single powered seat I’ve ever come across has been  embedded in leather. The security system was effective. If you delay your entrance into the car for more than about 10 seconds, the ignition won’t work, and you have to lock it again with the remote key fob, then unlock it. Very annoying; and not much use to Subaru buyers, who, presumably, live mainly in crime-free areas. The key fob had just one button to push. You pressed it to get in, and then pressed it again to lock the doors. What a great idea. No more fiddling around and squinting in the dark as you try and make out the hieroglyphics, or try to remember which way is up.

The electric power steering was sharp and accurate. The suspension was terrific, flattening out the corners and absorbing bumps. The driver’s seat setup seemed higher than regular cars. I liked that. The 5-speed gearbox was excellent; thank goodness it didn’t have the ubiquitous 6th gear which in a torquey diesel often means you have no idea which gear you’re in. Surprisingly, there were no gizmos to warn that you are about to reverse into the wall.

The diesel was very noisy at start-up and low speeds, but became smooth and quiet as you went faster. 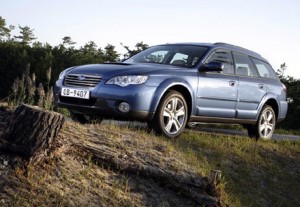 Pity about the bland looks, although I don’t think that will put off Subaru’s natural constituency. I hope I’m wrong about the fuel consumption because that would be a vote loser.