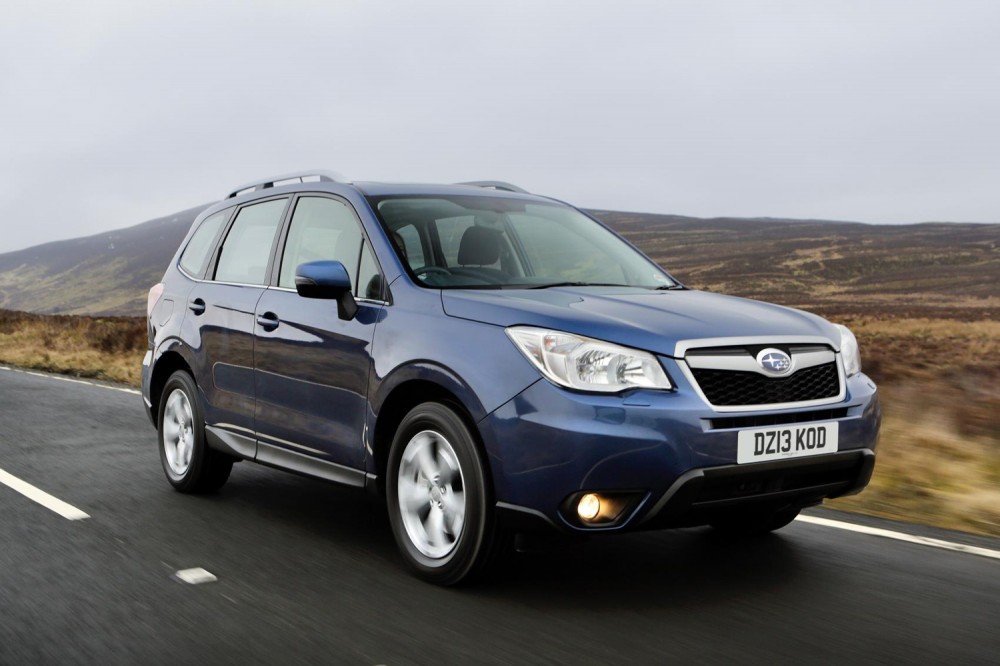 Handles Well, Great On The Highway As Well As Off-road.

“Definitely not a Chelsea tractor”

For – practical, no-nonsense
Against – bland, not cheap

“Subaru claims you’ll get an average 49.6 mpg and according to my calculations that’s an exaggeration of only 14.8 per cent, breathtakingly honest by BMW’s 30 per cent standards”

Unlike most SUVs, the Subaru Forester is more a serious workhorse than a fashion statement.

I doubt if Subaru will be bringing out a two-wheel drive version for those who want an SUV for show. The Subaru Forester is the antithesis of the Kia Sportage. If you want your SUV to be all about work, understatement and serious utility, you’ll go for the Forester. Those who want a bit of bling and wow should stop reading now and go for the Sportage. 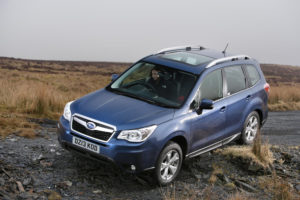 The Forester is impressive. The interior of the XC diesel version I drove was of high quality with leather trim and nice plastic surfaces. The Forester drove well with a tremendously gutsy flat-four “boxer” engine and accurate steering. The engine was quite loud and clunky at start-up and slow speeds, when it gave off a kind of rumbling gurgle. When it got going there were no complaints. The Forester didn’t roll much on speedy corners. The driving position was high and commanding. The XC version had a neat, long sunroof, although I used the air conditioning for most of the trips I took, mostly on highways. The stiff and inaccurate gearbox was pretty awful, but that wouldn’t bother me; I’d go for the automatic anyway. The radio/sound system/satnav was a nasty-looking version; not very impressive.

The Forester had surprisingly perky acceleration, and cruised quietly and competently on motorways. I didn’t get the chance to drive it off road, but Subaru has a good reputation for meeting high standards when the tarmac runs out. After all, it probably uses the same computer as a Land Rover. And buyers of Foresters tend to be farming folk, who will actually need all the all-round ability an SUV offers.

The fuel consumption was a very worthy 42.2 mpg and much of that was cruising at a barely legal 85 mph on motorways. Subaru claims you’ll get an average 49.6 mpg and according to my calculations that’s an exaggeration of only 14.8 per cent, breathtakingly honest by BMW’s 30 per cent standards.

No Chelsea tractor
This is the fourth generation Forester and it has been successful in rural communities who really need four-wheel drive. Definitely not a Chelsea tractor clientele. Prices start at £24,995 for the 2.0D X, and the range-topping 2.0i XT is £30,995. That seems pricey to me. 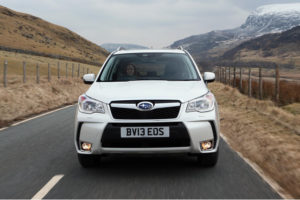 Subaru engineers have increased the size of the cabin by expanding the wheelbase and widening the vehicle’s body, while cargo capacity has also been increased. The new Forester is two mm taller than the outgoing model, 15 mm wider, and 35mm longer, with a 25mm longer wheelbase – and through clever packaging, there are bigger increases in interior space than external dimensions. The addition of a powered rear tailgate on the highest XT trim level, improves ease of use and functionality.

Subaru says it has improved the quality and ambience inside the new Forester compared to the outgoing model, through the use of higher grade materials on the dashboard, the centre console and doors.

Standard safety stuff
All safety equipment is fitted as standard to every model in the Forester range, including twin front, side, curtain and knee airbags. 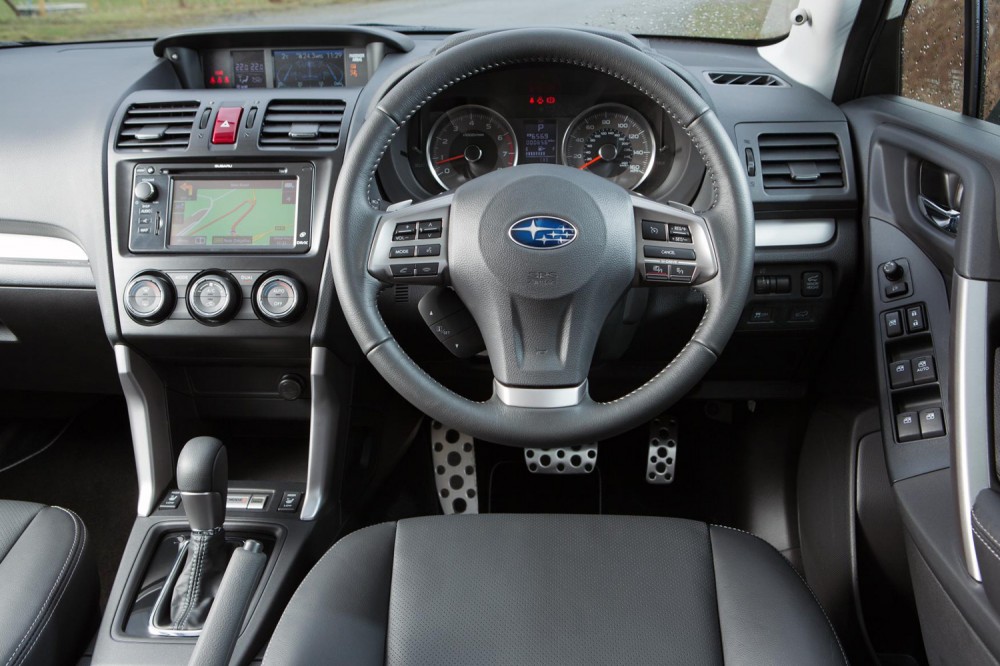 Forester buyers will have three 2.0-litre horizontally-opposed four-cylinder engines to choose from – a 148 hp naturally-aspirated petrol engine and a 145 hp turbocharged diesel, as well as a 237 hp direct injection turbocharged petrol motor. You can have either a six-speed manual transmission, or a CVT automatic. Off-road driving is helped by a new all-wheel drive system which includes Hill Descent Control.

If you buy a Subaru, there’s always the added bonus that nobody will call you a brand slag, and will probably think that my, that person actually engaged his brain, forgot his ego, ignored fashion, and simply went for something that just did the job. With all these qualities, you won’t even mind being called boring. 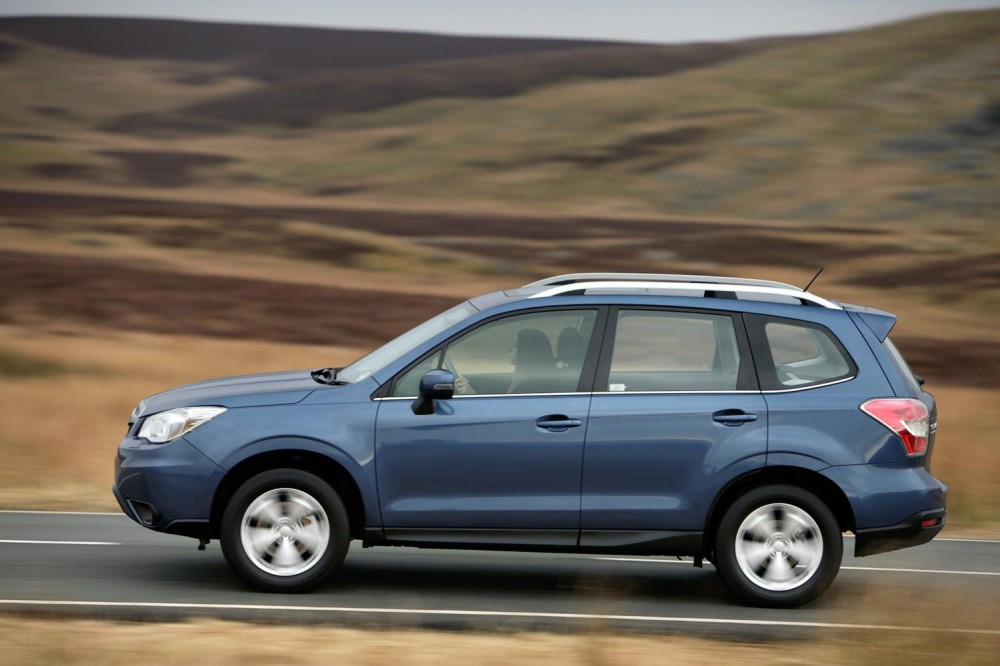