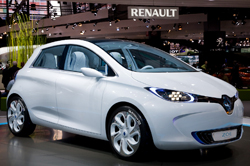 Renault Cranks Up Electric Output; Now To Find Some Buyers
Can The Zoe Ignite A Bit Of Enthusiasm?
“Carlos Ghosn did indeed bet the farm with Renault’s ambitious electric only vehicle project”

“Car makers now seem to put their hopes on fuel-cells with ranges similar to that of conventional cars. If they are right, the EV episode has been an enormous waste of time and money”

It’s depressing when you organise a party and nobody shows up.

That must be how the Renault-Nissan alliance feels as its showrooms fill up with electric cars that can’t find homes.

Most manufacturers hedged their bets a bit as electric cars were hailed as the way to cut carbon dioxide (CO2) emissions and consumption of fossil fuel. No matter that in fact electric cars merely transfer the production of CO2 to often coal-fired power stations, cost more than twice as much as regular cars, and have mediocre and unpredictable range.

But the French-Japanese alliance, egged on by CEO Carlos Ghosn’s claim that global sales of battery-only vehicles would reach 10 per cent of global sales by 2020, have committed $5 billion to produce a range of electric cars. Alliance electric vehicle production would reach 500,000 a year by 2015. Sales would reach 1.5 million electric vehicles by 2016, including Renault Zoe and Fluence sedans, Kangoo vans, and the Twizy commuter machine that looks like a motor-cycle with a roof and four wheels, plus the Nissan Leaf and electric Infiniti. Most other manufacturers hedged their bets with much lower predictions and contented themselves with spending just enough to make sure that if electric cars suddenly became flavor of the month, they could quickly mobilize their resources.

“Carlos Ghosn did indeed bet the farm with Renault’s ambitious electric only vehicle project,” said Vic Heylen, director of the Flanders Centre for Automotive Research (FCAR) based near Antwerp, Belgium.

“In the meantime, the project has been scaled down,” Heylen said.

Renault had planned to build a battery plant in France, and Nissan had similar plans in Portugal. Both have been dumped. Nissan meanwhile still says it will build more Leafs at its British plant next year, despite dismal sales in Western Europe.

Even in France, doubts are being expressed about the viability of Renault’s plans. The influential Le Monde newspaper earlier this year headlined a story on the issue as “Renault’s Foolish Bet”.

But Renault is launching the little Zoe now in Europe, and according to Carlos da Silva, IHS Automotive analyst in Paris, it is priced closer to competitive cars of similar size and stands more of a chance of winning sales in the mass market. Da Silva agrees that Renault-Nissan has been over-ambitious with targets like 500,000 battery powered car sales a year by 2015, and cumulative sales of 1.5 million by 2016.

Zoe
“The Leaf is barely selling 10,000 this year in the U.S., with Nissan’s target probably close to 20,000. In Europe it is mainly Renault leading the race for electric vehicles. Unfortunately, the weak economy isn’t helping the sale of these advanced cars, and nobody is buying the Leaf in Europe today. Things could change in 2013 with the Renault Zoe, which with government incentives is priced close to a similar sized petrol (gasoline) car. This is the first mass market EV with a normal price. Renault is selling the car but leasing the battery to lower the cost,” da Silva said.

Da Silva pointed out that Nissan in the U.S. has cut the price of the Leaf, but Renault-Nissan isn’t likely to meet its sales targets.

“EV sales haven’t really started yet. We don’t think by the middle of the decade you will see as many electric vehicles as Renault Nissan is targeting,” he said.

In the real world, there aren’t many signs of life yet for electric car sales.

Financial tsunami
According to British newsletter Automotive Industry Data (AID), electric car sales in Europe reached 20,558 mainly battery-only Leafs and Opel Amperas, Europe’s version of the Chevrolet Volt, in the first 10 months of 2012 for a market share of 0.21 per cent. The Volt is a battery powered car with a regular gasoline-powered engine to extend the range.

“Renault-Nissan stuck its neck out and made this massive investment in electric car technology, battery technology and everything associated with it – suppliers, training with dealers and mechanics. Brand-new manufacturing plants, built at vast expense, are just about ready to start volume production of electric cars for which there are presently no willing buyers,” Schmidt said.

“Ghosn probably rues the day he made that projection (10 per cent of global sales by 2020). Renault might look smart if demand suddenly jumps. But ask anybody dealing with the automotive market and you struggle to find anybody living in the real world who would expect a repetition of what we are seeing in Norway,” Schmidt said.

Punitive Norway
Oil rich, social democrat Norway, is the biggest market for electric vehicles in Europe with a market share of just over five per cent. Norway uses punitive taxation against regular cars, plus government action to favor electric cars in parking and city access to boost battery car sales. France, which owns 15 per cent of Renault, has also used subsidy and government contracts to boost electric car sales, to little effect so far. Electric market share in France is 0.47 per cent in the first 10 months of 2012, according to AID.

Dr Peter Wells of the Cardiff Business School wonders if governments will come to the rescue of electric car projects, but points out that the CO2-thwarting credentials of electric cars are now being questioned.

“I think Renault and Nissan must be getting worried by now, even though a substantial proportion of the investment in electric cars has been supported by governments,” Wells said.

The U.S. government gives a tax credit of up to $7,500 for every Leaf and Volt sale, with subsidies reaching a total of $7.5 billion by 2019. Britain and France give similar amounts for each electric car sold. Germany, so far, gives nothing; not surprising as none are made there, yet.

“The good news for them (Renault) is that the infrastructures are being rolled out, and fleet purchases are likely to make an impact soon. I suspect France will rally round to support Renault and buy more EVs. However, sales are horribly small despite subsidies and exhortations,” Wells said.

Wells pointed out that voter tolerance of the wealthy being offered big handouts to buy expensive cars which they could afford anyway isn’t likely to last. And he says the effectiveness of electric cars in saving CO2 is under scrutiny, with better traffic management and restrictions to city centers offering more gains in reducing pollution.

Too heavy
“The relative failure of the EV project could not only be a problem for Renault but for the whole industry which faces a challenge to its social legitimacy,” Wells said.

Nicolas Meilhan, analyst with Frost & Sullivan in Paris, agrees that electric cars are failing the test for which they were first mooted; they don’t save much on CO2 because they are often too heavy. Just putting a battery and electric motor in a regular car leads to little gain in whole-life to recycling CO2 consumption. City cars should weigh no more than about 1,100 lbs. This means seriously small cars; even the little Mercedes Smart two-seater is a bit too heavy. Meilhan points out that the iconic little Citroen 2CV, phased out more than 20 years ago, would be a perfect city car today in terms of its 990 lbs weight. Meilhan said the Chevrolet Volt was the right way to go for driving outside city centers.

“The  Volt is to PHEV (plug-in hybrid electric vehicle) what the Prius was to HEV (hybrid) 15 years ago – the first of its kind. And there’s plenty of room to improve it,”  Meilhan said.

Jacques de Selliers, founder and former managing director of Brussels-based Going Electric, sounds almost despairing about the future of electric vehicles, which won’t sell on their limited merits and need a big push from governments.

“Renault is coming to the market at the wrong moment. Governments aren’t helping enough. They must help manufacturers make them desirable by giving electric car owners things like unlimited parking, priority lanes, free tolls, like in Norway. It would cost very little. If there’s no obvious benefit why would you drive one? There will no electric cars if you don’t create the conditions that make them useful,” de Selliers said.

AID’s Schmidt sees a possible scenario which could boost sales of electric cars. Schmidt points out that European Union (and U.S.) targets for average fuel consumption present luxury manufacturers like BMW, Mercedes and Audi with a huge problem. How can they sell their hugely profitable gas guzzlers, if they have to pay the gigantic fines for non-compliance? Schmidt said the Germans might decide to produce large numbers of small, battery cars and even sell them at a loss to bring down the average fuel consumption of the overall fleet. This would allow them to still sell enough Mercedes S class or BMW 7 Series limos and still make fat profits.

Fuel cells
“Most experts agree that nothing is happening in the electric car market now, but this would also prepare them for perhaps the long-term success of electric cars in say 2025, 2030, 2035. Everybody must prepare for that day. That would be a clever way for the Germans to  get around fuel consumption regulations and at the same time end up with a green halo,” Schmidt said.

FCAR’s Heylen wonders if the whole electric car fad is a dead end.

“Car makers now seem to put their hopes on fuel-cells with ranges similar to that of conventional cars. If they are right, the EV episode has been an enormous waste of time and money,” Heylen said.