American Design To The Fore At Detroit 2011 Show 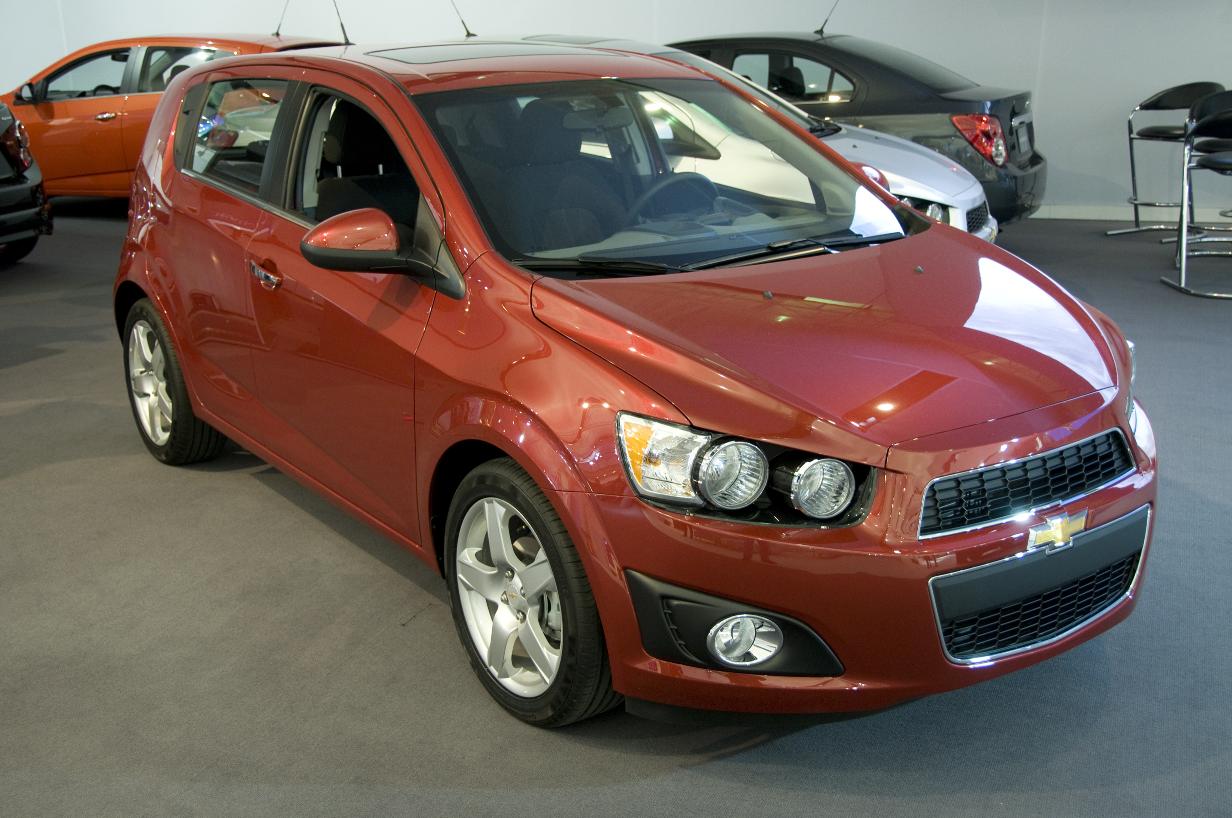 Sonic, Not Volt, Is The Most Important
Chrysler 300 Shows U.S. Number 3 Is Back In The Game

The most significant car at the Detroit car Show this year was the little Chevrolet Sonic, not the Chevrolet Volt which won the award as Car of the Year.

That’s not to say that the Volt isn’t a fantastic technical achievement. The idea of using a battery, which could be refuelled on the go by an onboard gasoline engine, blows the battery-only concept led by the Nissan Leaf out of the water. When Leafs grind to a halt, short of the range required, Volts will barrel serenely on by. But it is just too soon to start garlanding the Volt with honours, It has to prove itself in action on the road first. European journalists made a similar mistake with the Leaf, voting it Car of the Year because of its battery technology, but which has yet to prove its viability.

The sub-compact Sonic, which will replace the Korean-built Aveo, is significant for at least three reasons. Because it will be built at Orion Township, Michigan by GM, it shows that America can now build small cars economically. The fact that it is as cute as a box of puppy’s means it will sell well. And the stylish little Sonic also underlines a reassuring fact for Americans. Looking around the show, you can see that American design is leading the way. Europeans and Japanese like Volkswagen, Audi and Toyota showed new cars that are worthy but bland. Look at the Chrysler, GM and Ford stands and you see style, panache, excitement. Hopefully, under the skin they will prove to be as good as the Europeans and Japanese.

Cadillac CTS-V
Leading the way in American styling, Cadillac luxury cars are the first you see in the GM area, led by the Cadillac CTS-V racing car. I’ve just spent a week in Scottsdale, Arizona driving the road-going CTS-V, which has 564 hp of supercharged V-8 engine. This car turned heads all around Scottsdale and crowds would gather in parking lots to find out more about the car. Was it as good as a Porsche, BMW or Mercedes? I’ve already driven this car on German autobahns, and the answer is “Yes”.

Fiat 500
The Fiat 500 has been a huge success in Europe since it was introduced in 2007, with its styling cleverly linked to the old 1950s models made famous by movies like Roman Holiday starring Gregory Peck and Audrey Hepburn. The Fiat 500s on sale in America this month are made in Mexico. Prices start at $15,500. U.S. versions have suspension tuned for American roads, and more robust heating and air conditioning. The 500 will also get a larger gasoline tank – 10.5 U.S. gallons compared with 9.25 gallons. Buyers can choose between a six-speed automatic or a five-speed manual. One thing Americans will notice when they get up close and personal with the 500; this thing is seriously small. 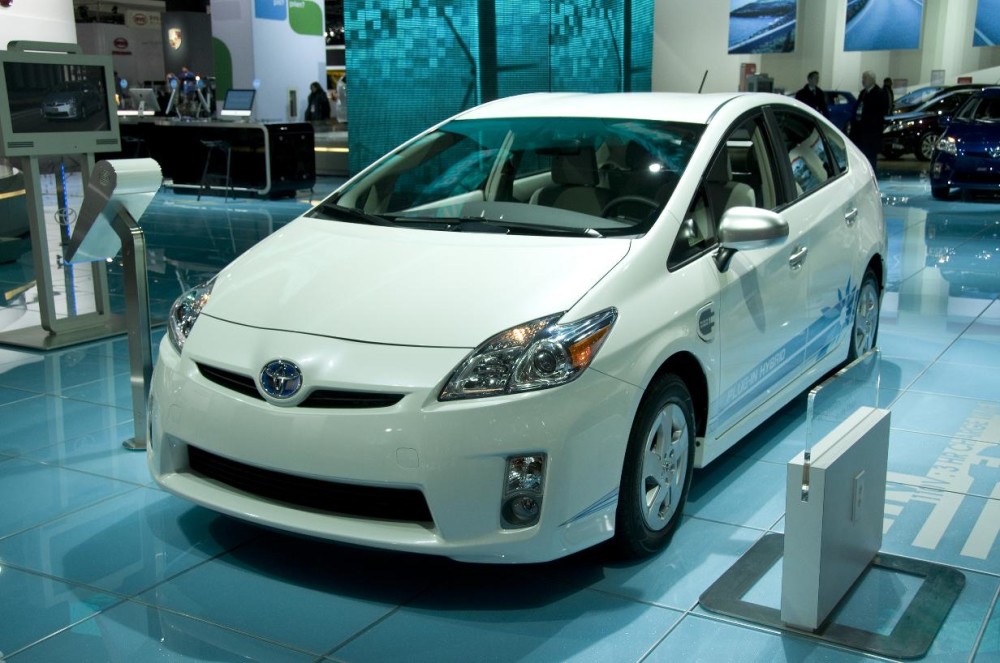 Toyota Prius
The highly successful and ground-braking Prius gasoline-electric hybrid has now been expanded into a four-model family with a new plug-in, a wagon version, and a super fuel-efficient model. The plug-in, a rival to the Chevrolet Volt, will have a battery with 12 miles of range, and will go on sale in the first half of 2012. The success of the Prius has always been a bit of a puzzle to Europeans, because diesel engines there produce at least as good economy, and much better performance. Maybe the plug-in will prove more efficient than diesels.

Looking around the Toyota stand is a grey disappointment, with rows of worthy but dull cars. Toyota has already acknowledged that in order to thrive again, it must add some pizzazz to its designs.

“It’s sort of like climbing out of a Phantom F4 jet and into an X-Wing from Star Wars,” Zetsche said, when lauding the ability of this car to leave traditional muscle cars languishing in the dust.

The SLS AMG E-cell has four-electric motors producing 525 hp and 649 lb ft of torque, and will go into production in 2013. The car can blast from rest to 60 mph in 3.7 seconds. The battery has an energy content of 48 kWh. Mercedes didn’t disclose the range of the car, which probably be about 10 minutes if driven close to its capacity.

Audi A6
Audi unveiled its new mid-range car, the A6, which is barely distinguishable from the old one, although it is much lighter, more aerodynamic and roomier. VW’s upmarket subsidiary uses aluminium in more than 20 per cent of the body, using techniques pioneered by the flagship A8. The A6 goes on sale around the world later this year. There will be a hybrid version later in 2011.

Although Audi’s A7, roadsters and sports cars have exciting designs, but the bread and butter sedans are barely distinguishable to look at.

VW Passat
The VW stand also carries on the worthy but bland and inoffensive theme, with the new Passat, undoubtedly a terrific example of engineering brilliance, but deadly dull on the eye.

Ford Explorer
The new Ford Explorer, and most of the cars on the Ford stand, show just how far American design has advanced. From the stunning little Fiesta to the smart new Focus, Fords look snappy and attractive.

Saab
Saab, which survived a near-death experience last year, deserves a special mention in dispatches for bravado. To save money, Saab, the Swedish carmaker that was dumped by GM, camped out on the sidewalk across the road from the Cobo Center.

Saab hunkered down inside a couple of tents erected to shield the assembled media from the biting cold. And it managed to find enough space on the sidewalk to show off its product range – including the new top-of-the-range 9-5 and the 9-4X SUV, which will be launched on global markets in May.

Saab plans to return to the show, officially, next year.

Brazen hyperbole
Anyone attending press conferences at car shows soon gets used to a meaningless torrent of brazen hyperbole. But some times the talk gets so far off track it can’t be ignored. On the Smart stand, about 20 feet off the ground was a slogan – “Safety is not a question of size” with a little Smart car suspended alongside it. Of course size is a huge factor in any accident. It doesn’t matter how strong the engineering of a Smart’s roll cage might be, and it undoubtedly is, the mass of a big SUV and a small city car colliding isn’t likely to be good news for the occupants of the small car. Although if every Smart could be suspended high off the ground at all times, that might do the trick.

And battery-only sports car pioneer Tesla has written this preposterous beauty on the side of its stand. “We will not stop until every car on the road is electric”. The quote is attributable to Elon Musk, co-founder of the company.

My unworthy first thought was that perhaps it ought to read “Every car stopped on the road is electric”, in recognition of the fact that as soon as battery cars become ubiquitous on the road, their unpredictable range will make a stranded electric car an everyday experience. 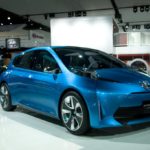 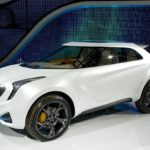 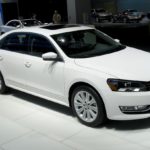 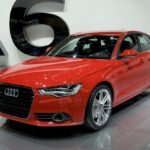 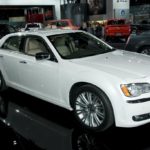 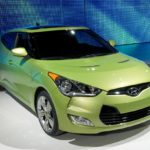 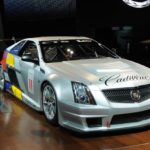 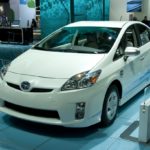 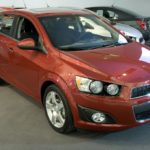 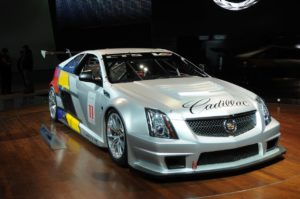 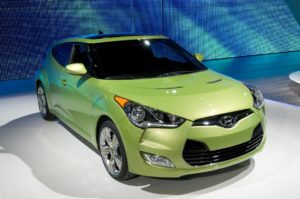 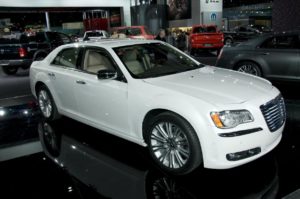 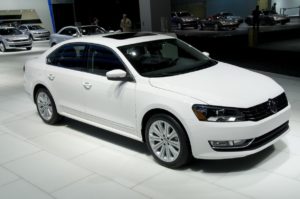 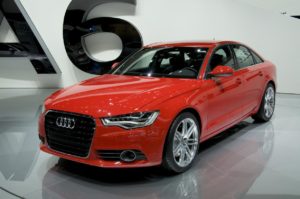 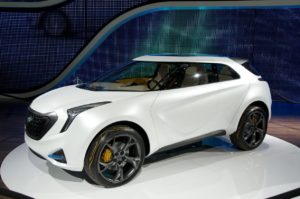 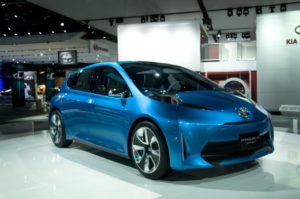