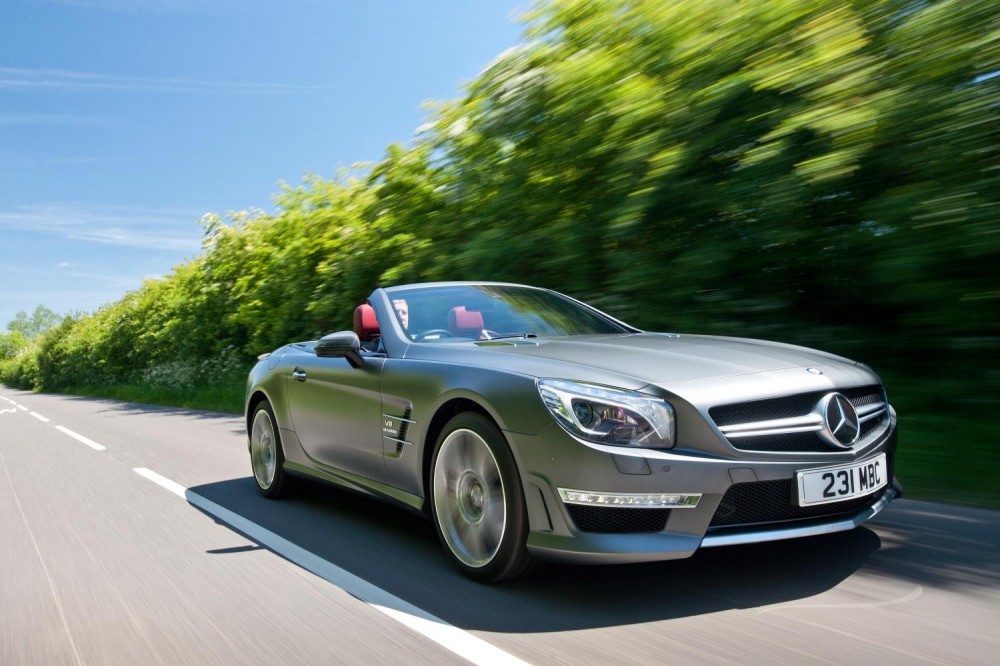 Why I Bought It..

First in a series of interviews with real buyers of new cars.
BMW, Jaguar, Audi Considered Carefully And Rejected.

“It wins on money and comfort and it’s nicely understated. It doesn’t shout at you like the Jaguar”

“Don’t buy, lease. The SL 63 is safe, fast, has great presence, has luggage space for golf clubs and is very well made”

Tony Antoniades is Chairman of RDF Group, the Brighton, Sussex-based provider of software solutions to the banking industry. Antoniades said RDF has about £35 million in annual revenues and describes it as a boutique, small to medium enterprise. 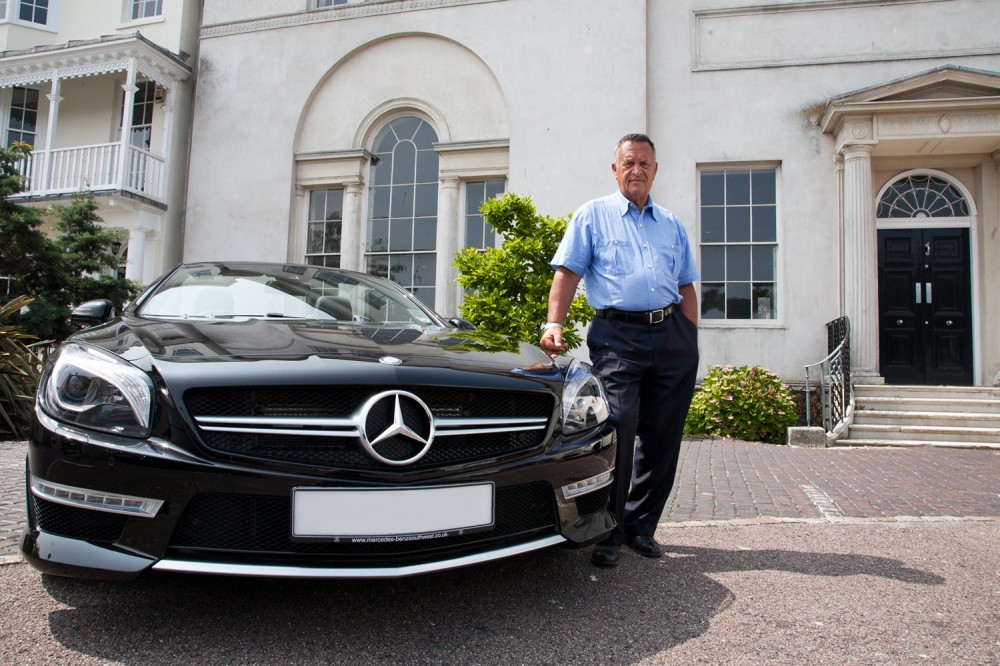 Long-term car aficionada Antoniades recently took delivery of his new Mercedes Benz SL 63 AMG. He could have gone for among other things an Audi R8, a Jaguar F-Type V8 or a Maserati to replace his BMW 640. Most of us would find this an impossible choice because of the perceived excellence of all of them. But Antoniades has a long record of owning supercars from Porsche to Ferrari via Maserati, and clearly is worth listening to when he sounds off about motors, which ones have satisfied him in the past, and which ones let him down.

Why did you buy the SL 63 AMG?
“I looked at reviews and the price points  – the SL is £300 a month  less than the BMW 640 (to lease) and I compared the Jaguar F-type which I ordered and then cancelled. It’s not a great car to drive at very low speeds. As Top Gear said, if  you want an osteopath get an F-type.”

I have to say that having driven the new Jaguar F-Type for the first time a half-hour ago. I didn’t come away clutching my back.

But back to Antoniades
“It was no contest really. The SL 63 won on costs, pedigree, build quality and it’s got a big boot, a glass and magnesium roof, not a rag-top like the F-type, and it’s a lot cheaper. The numbers were overwhelming for going with the SL 63, absolutely overwhelming. It makes the F-Type look an incomplete car.”

Fast and furious
“If I’d  wanted to go one level higher, there was the Porsche 911 turbo with four wheel drive. But I’ve got one problem with all Porsches, they are not a great car in terms of ride. Fast and furious, but the Mercedes is far more comfortable. It wins on money and comfort and it’s nicely understated. It doesn’t shout at you like the Jaguar and when you look at the comparison between the  BMW and the SL 63 – it walks all over it and treads it into the ground.

Any problems with the Merc yet?
“The steering is on the light side.”

How long will you keep it?
“I only keep cars for about two years because I like to stay new. Ferraris, Maseratis, Porsches – I’ve been through the lot over the years. I look at what the pundits say, read road tests and go and drive them myself.  Then I look for value.  These beauties lose a lot of money in the first year or two and getting the right financial package is key. Mercedes is very favourable for business users. Extremely helpful. And the cars are better. The Mercedes of today is far, far better than the Mercedes of six or seven years ago. The finish and interior of the SL 63 is peerless.”

Overstated, ugly
“I looked at the (Ferrari-based) Maserati cabrio but the outside appearance is overstated and ugly. Lovely, lovely engine – nine out of 10 for the engine – but you’d be lucky to get 30 or 40% back after two or three years. Ferraris remain unreliable. Who wants to get stuck between here and the South of France? Reliability is a big issue. Mercedes can be serviced anywhere. Try and fix a Maserati when you are in Southern Ireland; forget it.”

Surely the Audi R8 was a candidate? Apparently not
“It was claustrophobic and the gearbox was awful. I hated that. In my opinion it’s an overcooked egg that really shouldn’t be on the road. Turns heads but I don’t like it.

What else is your garage now?
“The Ferrari Testarossa that I bought in 1986 is still there and the Ferrari 308 GTS. Other Ferraris have come and gone. There’s a  Range Rover Sport”

Of all the cars you’ve owned, which one was the best, the worst, and the most unreliable?
“My Austin Healey 3000 1967 mark 3A was lots of fun and took me all the way around Europe from Chamonix to Juan Les Pins. The worst was Ford Zephyr 6 which couldn’t stay on the road. It needs rails.”

Haywards Heath taxi
That’s the first car Antoniades owned that I can relate to. I drove one for the Haywards Heath Station Taxi company in the late 1960s, and I never came close to driving it off the road. I wonder what he would have made of my Ford Zodiac taxi, with four gears on the floor?

“The most unreliable? Ferrari; of all the cars I’ve owned. Very unreliable.  Don’t take them on a long journey and don’t go anywhere on a hot day. For peerless fault-free; Porsche. I had three or four 911s and none of them caused me any mechanical grief.”

What’s next on the buy list?
“I’ll probably replace the SL 63 in two years, and the BMW i8 is my favourite to replace it at the moment.”

The BMW i8 is a plug-in hybrid supercar yet to be launched by BMW but promised for 2014.

Don’t buy; lease
Antoniades likes the idea of electric cars, and has installed chargers in his garage.

So what’s his advice for other car buyers?
“Don’t buy; lease. You get much better value and don’t suffer degradation of losses and at least you are working with fixed costs. I know exactly what it’s costing until it goes back. For £1,110 a month the SL 63 is an all-round winner. Safe, fast, great presence, understated, luggage space for golf clubs and very well made,” Antoniades said.

The SL 63 AMG is powered by a biturbo V8, that develops 537 hp. It rockets from standstill to 62 mph in 4.3 seconds and on to an electronically limited top speed of 155 mph. 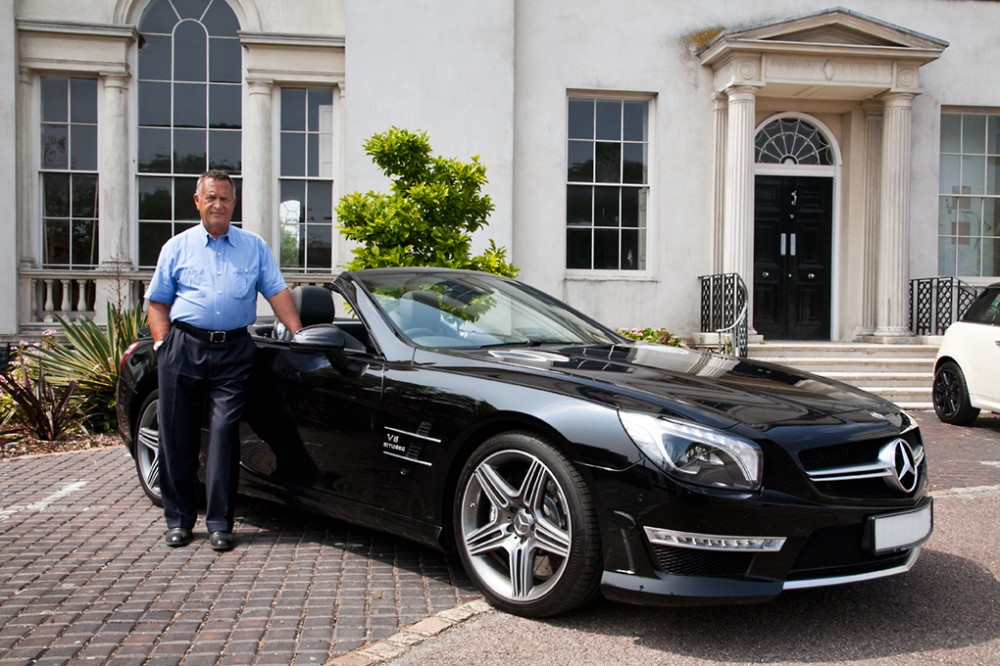