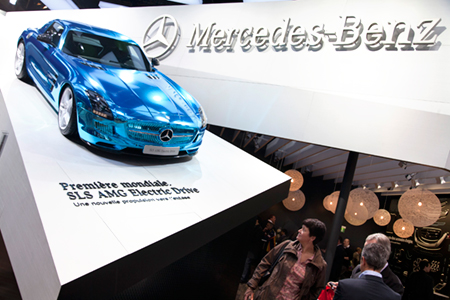 Race For First Place Might Succeed, But Cost Seen As Unacceptable Unexpected Profit Warnings, Botched Financial Release Didn’t Help “The company remains in denial. Labour costs at Daimler stand at 16.4 per cent of sales versus 11.2 per cent at BMW”

Mercedes might be fighting toe to toe with BMW for the title of luxury car sales king of 2012, but regardless of who wins that contest, some investors have lost patience with the three-pointed star.

Many investors believe Mercedes’ ambitious long-term sales and profit targets are un-makeable as well as contradictory. It still has not tackled its long-term problem of employing too many workers making too few cars, while the economics of its operation look especially shaky when compared with Audi, which is able to slash costs by using engines and parts made across its parent company Volkswagen’s huge annual production.

Mercedes wants to more than double sales to 2.7 million by 2020 to become the world’s largest premium car maker. Mercedes sold 1.26 million cars in 2011, 120,000 less than BMW. Mercedes has also pledged that operating profit margin would be more than 10 per cent in 2020. Mercedes has been slipping down the premium league and over the last 10 years it sales rose 1.4 per cent while BMW’s rose six per cent and Audi’s 7.4 per cent. Mercedes share of the premium segment slipped to 21.4 per cent last year from 25 per cent in 2001, according to industry forecaster IHS Automotive.

Mercedes’ traditional markets are under threat because of government rules insisting fuel consumption ratchet ever lower. For instance, by 2020, the European Union says average fuel economy across its entire range must be about 62 miles per U.S. gallon. This means that traditional money-spinners like the top of the range gas guzzling S class limousine and E class have to be submerged by a new generation of fuel-sipping small cars. Small cars, like the recently launched new Mercedes A class, mean lower prices and lower profit margins.

Parent company Daimler has also developed an unnerving habit for investors of suddenly withdrawing its estimate of profits and replacing it with a much worse one without warning. Daimler did this twice recently. Once just before the Paris Car Show in late September, and again last month.

Deteriorating markets
In late October, Daimler warned after reporting third quarter earnings two per cent down at $2.5 billion, it would miss its full year profit forecast by about $1.3 billion because of deteriorating markets in China and Europe. Profit targets for 2013 were withdrawn, too.

In 2011, Mercedes car and truck EBIT profits (before interest and tax) was just over $9 billion.

Mercedes has also allowed a confusing saga of plans to cut costs to appear in the media. None of these plans attempted to address the vexed question of labor costs.

The latest profit warning came after the release of news to the media was botched because an operative in the Stuttgart headquarters pushed the button one day early, and the numbers had to be described as being “pre-released”.

This was all too much for Credit Suisse analyst Arndt Ellinghorst, who is much more impressed with Audi and BMW.

“Daimler’s repetitive disappointing fundamental performance is bad enough. However, combined with outstanding execution at its peers VW and BMW it leaves only one conclusion in our view: Daimler will remain an unrewarding place for shareholders. Even if we were to assume that Q4 marks the low point, if we accept that 2013 is another transition year, if we buy into the Mercedes product story: The fact is that material near term risks remain, which makes an investment at this stage premature in our view,” Ellinghorst said.

“The company remains in denial. Labor costs at Daimler stand at 16.4 per cent of sales versus 11.2 per cent at BMW,” Ellinghorst said.

Morgan Stanley analyst Stuart Pearson isn’t impressed either, saying the third quarter figures showed a sharp decline in operating performance across all divisions. He is not convinced the company is on the right track.

“Although 2013 margin targets have been postponed indefinitely, management still targets thru-cycle margins of 10 per cent at Mercedes and eight per cent at Trucks. To get there, Mercedes targets two billion euros ($2.6 billion) in cost cuts by 2014, with the bulk to come in 2013. A further 1.1 billion euros ($1.4 billion) in cost savings are targeted in trucks by 2014. However no job cuts are planned beyond temporary staff and the use of working time accounts,” Pearson said.

These verdicts are a bit too harsh for Tim Schuldt, analyst with Equinet Bank in Frankfurt, Germany.

“In 2020 there are very strict European rules about average fuel consumption of 95 grammes (per kilometre of carbon dioxide CO2, close to the equivalent of 62 mpg) and high fines for those not making it. It would be impossible to reach that by reducing the CO2 of an S class, so the only possibility is to bring smaller cars to the market, and smaller cars mean small profit margins,” Schuldt said.

No way around it
“It will be difficult to reach both (profit and sales) targets, and the competition is unrelenting, and you have to bring small cars to market whether you like it or not. There’s no other way around it,” Schuldt.

Mercedes also plans to revamp its Smart citycar output via a deal with alliance partner Renault-Nissan. A replacement Smart is being developed with small-car specialist Renault of France, which Mercedes hopes will double the current scale and reduce costs. There’s plenty of scope for cost-cutting on the Smart. Morgan Stanley estimated each model sold in the mid-2000s lost $3,500.

Mercedes and Renault-Nissan each hold stakes of about three per cent in each other.

Mercedes also has big plans for its new little A and B class cars, with China making a huge contribution. Mercedes is believed to see a market of between 800,000 and 900,000 for its compact premium cars in China by 2020.

Schuldt reckons BMW will also have difficulty keeping its profit margins up because of the 2020 fuel economy standards, but Audi, owned by VW, has a massive advantage.

“Look at Audi. Because it is part of the VW group it will be much easier for them. They don’t have to reach the target on their own, they can be counted (for the fuel consumption average) with lots of small cars like the Polo and Golf. BMW will get a bit of help from its Mini brand, which is able to earn premium prices in the small car segment, but they too will have to grow significantly in the small car area and this will be a drag on their  margins too,” Schuldt said.

Tim Urquhart, senior analyst at IHS Automotive, thinks Mercedes deserves a break for seeking to revamp its image with more exciting designs like the new A class.

“Mercedes is having a tough period at the moment, but some of these criticisms are a bit harsh. It’s taking a bit of time to get the marketing and brand image right, but it is going in the right direction. Trying to inject some youthful dynamism won’t happen overnight, but I don’t think they are doing much wrong at the moment,” Urquhart said.

Nay-sayers have it
But the nay-sayers outnumber the supporters.

“We remain highly critical of Mercedes’ growth strategy, which in our view has resulted in substantial price pressure and mistakes ever since management decided to go for growth by the middle of last year. We believe it is noteworthy that ever since this strategy was decided, Mercedes Cars has reported negative operational gearing in almost any single quarter and record sales at the same time,” Gehrke said.

“We believe the strategy to grow Mercedes to be the global premium volume leader will continue to hurt Mercedes brand, and worry about the long-term impact of such a strategy,” said Citi analyst Harald Hendrikse.