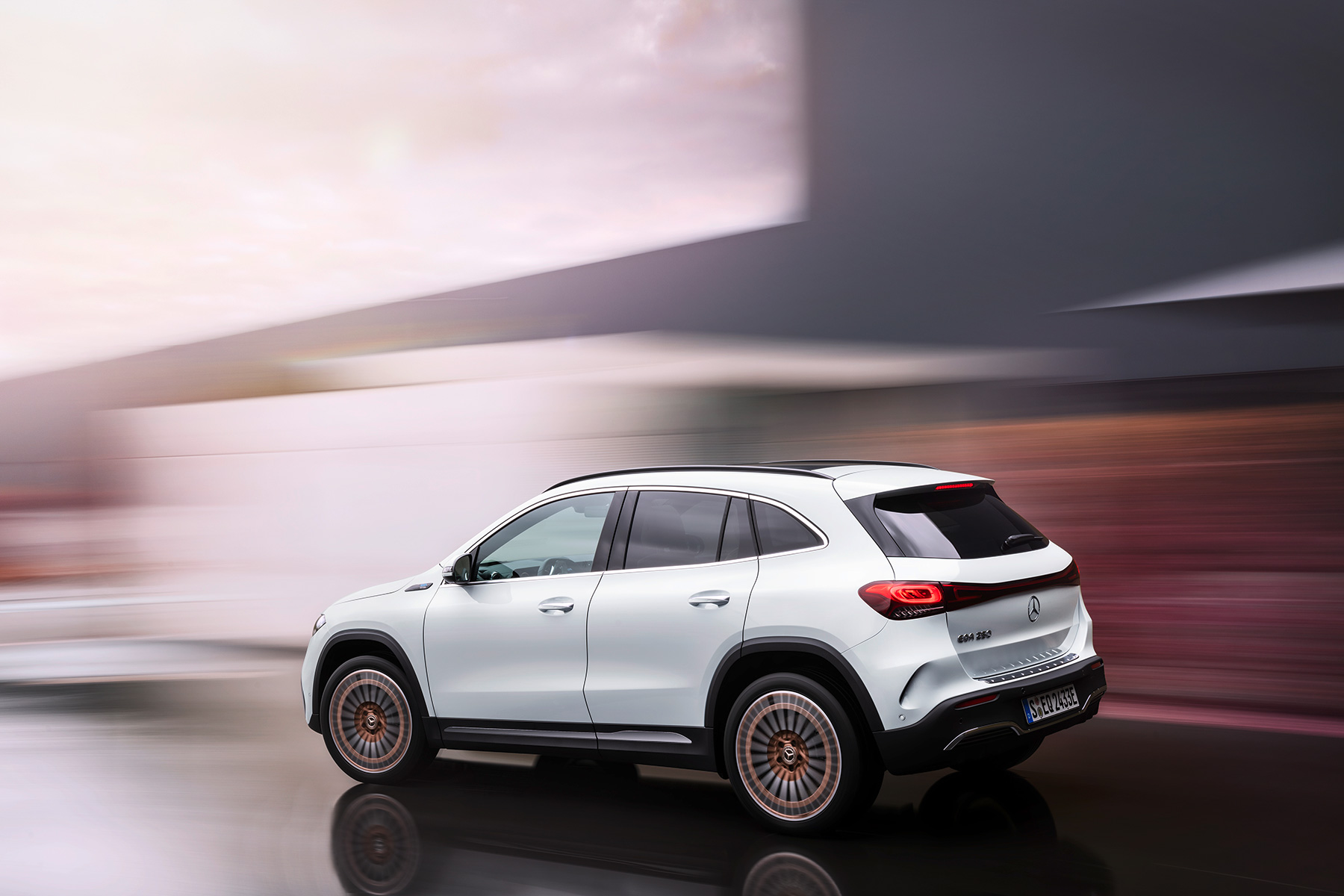 Mercedes EQA An Interim Electric Car, Before The Serious Push Starts in 2025.

“Mercedes’ starting gun has only just begun with the EQE/EQS that are based on custom-developed architecture.

The Mercedes EQA compact SUV is likely be a big seller for the German premium automaker as the company turns from being a laggard in the race to embrace electric mobility to be more of a competitor.

And Mercedes is now rated by some analysts as being second in the German automakers race to be green, behind Volkswagen, but ahead of BMW.

The EQA, at the bottom end of the Mercedes electric vehicle price-range, is considered more of stop-gap than an electric trail-blazer because it is based on existing technology, rather than being designed from the start to be battery electric.

The EQA might be considered small for the American market, but it is expected go on sale there in 2022. Mercedes has a large range of electric cars now, from the range-topping and recently launched EQS luxury sedan to SUVs like the EQB and EQC, EQV minivan and the EQE sedan.

Mercedes is still playing catchup with competitors like Volkswagen and its Audi, Porsche, and Skoda subsidiaries, with most of its electric vehicles being developments of traditional internal combustion engine (ICE vehicles).

The EQE and EQS are the first examples of vehicles designed from the start to be electric.

“Mercedes’ starting gun has only just begun with the EQE/EQS that are based on custom-developed architecture. Forget the EQA, EQB, ECQ, EQV etc as these are the equivalent of what VW brought to the market with the e-Golf a few years ago, and are in short, just ICE developed models adapted to accommodate a battery and an electric motor, rather than pure developed BEV (battery electric vehicles) models. Similar to what BMW is offering with the Mini, for example,” said Matt Schmidt, German-based auto analyst.

EV-volumes
Jose Pontes, analyst with Sweden-based industry tracker EV-Volumes, agrees there are ancient and modern categories of electric vehicles on offer from Mercedes.

“I would split them into two categories. Placeholder EVs, like the EQA, EQB, EQC and EQV, are transitional models based on ICE platforms, which work as placeholders until the real competitive BEV models land. They are good cars, but only OK BEVs. On the other category, I would place the EQS and EQE, which are BEV models from the ground up and are in a different league from their siblings, as these two can run with the best in class, like the Tesla Model S or Lucid Air,” Pontes said.

“The direct (overall market) competitors (for the EQA) are the Volvo XC40, Audi Q4 and VW ID.4, while a SR version of the Tesla Model Y, said to land in Europe during 2022, would also be a fierce competitor. As more indirect competition, we would also mention the Hyundai Ioniq 5 and Kia EV6, for their technology, and the Skoda Enyaq, a model whose class and practicality that is punching well above its weight,” Pontes said.

I spent some time with the 250 Sport, the base level version of the Mercedes EQA, and it was handsome to behold, with a classy interior, very effective regenerative braking, but like most current electric cars, suffered from range depreciation while motorway fast-lane cruising.

The 66.5 kWh battery turned out to have an average capacity of 231 miles after 6 charges, compared with the claimed, official WLTP, maximum claim of 263 miles. The motorway cruising penalty was an estimated 29.75%, giving a motorway cruising range of just over 170 miles. That’s quite enough for most buyers, but not for the trip to the Spanish villa. The data was much better than I expected, given the weight of the EQA and its bulk, which didn’t suggest it would cut through the air like a Tesla Model 3.

The EQA doesn’t have the mind-blowing performance of a Tesla, but normal drivers will find it more than adequate. The driving experience was first-class, with precision steering and very cosseting suspension. I’ve read contrary reports on this but my experience, which doesn’t include any close to the limit nonsense, was very positive. The regenerative braking was impressive. You engage this by pulling a paddle behind the wheel once, then twice if you want the full, driving-without-brakes effect. I always used the maximum, and on this car it felt as though it was doing a job even at close to high-speed cruising speeds. On my rolling country hills route, one section of 38 miles only used 25 miles of available range. Another 21-mile section used up only 15. A separate 93-mile run, which included about 30 miles of motorway cruising, used up the same number of available miles. Given the motorway section shaved range by just under 30%, that’s very impressive.

Hard to fulfil
French consultancy Inovev said Mercedes electric car plans are ambitious, rising from almost zero in 2019, to 1.25 million in 2025 and 2.5 million in 2030, when it says all its vehicles will be electric, like Volvo, Jaguar, and now BMW’s Rolls Royce. Inovev said this plan looks hard to fulfil without sacrificing much volume.

“We strongly doubt that Mercedes could read reach its 2030 objective of 100% electric vehicle sales, especially if they want to keep the same level of volume they have today. Otherwise, it would mean that they will experience a strong decrease of their sales volume,” Inovev said in response to questions.

And Mercedes is lagging behind the leader VW, according to Schmidt Automotive Research.

“Daimler (which owns Mercedes) is way behind VW in terms of EV platforms and is playing catch up. Mercedes is more concerned with selling their profitable ICE vehicles for now and off-setting them with profitable PHEVs (plug-in hybrids) while meeting various (CO2) emission targets and reinvesting those profits up to 2025 to begin their true BEV push,” Matt Schmidt said.

Schmidt Automotive Research estimates Mercedes’ PHEVs outsold BEVs by 4 to 1 in the first 8 months of 2021 in Western Europe.

EV-volumes’ Pontes also rates Mercedes as behind the leader VW but ahead of BMW in the race to be electric.

“So in a nutshell, Mercedes is not a BEV enthusiast, like the VW Group, but neither is it an ICE-lover, like BMW. I would place them in the “realistic” category, along with Stellantis and others,” Pontes said.