Whoops! It Still Doesn’t Have An Automatic Gearbox
Great Value, Classy Looks Inside And Out, Excellent Quality
*** out of 5

Mazda rarely puts a foot wrong with its marketing, but it dropped a clanger with its initial CX-7 SUV. It tried to sell this huge vehicle as some kind of sporty machine when it first appeared on the market about 18 months ago, talking about its dynamic handling, but didn’t pay attention to perhaps the most important demand of buyers in this category – economy. There was no diesel, ergo, there were no sales, to speak of.

Mazda has put this right with its latest version of the CX-7. Now there is no option but a diesel, although it does persist with its irritating talk about performance.

“With its sporty appearance, the new Mazda CX-7 is more heavily orientated towards a sportscar in its styling and driving dynamics while offering an SUV-style commanding driving position and a strong road presence that portrays Mazda’s dare to be different brand identity,” said Mazda UK Sales and Marketing Director, Mark Cameron.

Sure, the CX-7 does look handsome. Most competitors in this sector are desperately bland, so that’s a plus. Suggestions that the CX-7 is close to being some kind of sports car are way off the mark. 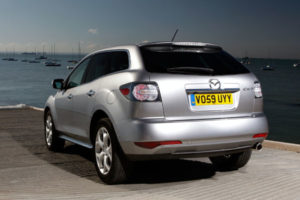 Good value
This does seem good value given the levels of equipment. There is one large gap in the specification – there’s no automatic gearbox option. Personally, I can’t imagine who would want to drive around in a great big machine like this, and have to change gear. In a big SUV, or MPV come to that, an auto box is a must. Nobody is going to buy a car like this for the pleasure of slipping up and down through the gears and going for a blast through the country lanes. 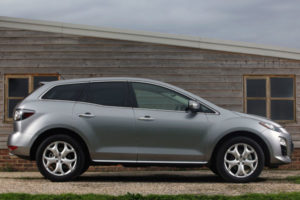 I drove it in on the highways and byways of Sussex, plus some miles of motorways and for sure the CX-7 is a pleasure to drive, with quiet, understated power on tap. The independent suspension flattens out the bumps without fuss.

The CX-7 includes some interesting safety features usually found on more expensive cars. The Emergency Stop Signalling System activates the hazard warning lights whenever the driver brakes abruptly and heavily. Rear Vehicle Monitoring warns the driver of a vehicle approaching from behind, using wide-angle radar. This also detects vehicles in the blind-spot. It ignores vehicles following in the same lane. The car’s computer also offers the full alphabet soup of ABS, TCS, DSC, EBD and EBA. Suffice it to say that all these things make the car safer by stopping the driver doing silly things, or mitigating their impact.

The CX-7 certainly looks like no other SUV on the road today, with its swoopy lines. Some of the body’s design cues are borrowed from Mazda’s experience of producing sports cars like the high-speed, rotary engine RX-8, and the little MX-5 roadster. The windscreen, angled at a steep 66 degrees, exaggerates the sleek look. The roof line dips early towards the rear, while the body moves upwards to give it an athletic impression.

Where most modern SUVs look boxy, van-like and anonymous, the CX-7 might well induce the “wow” factor. 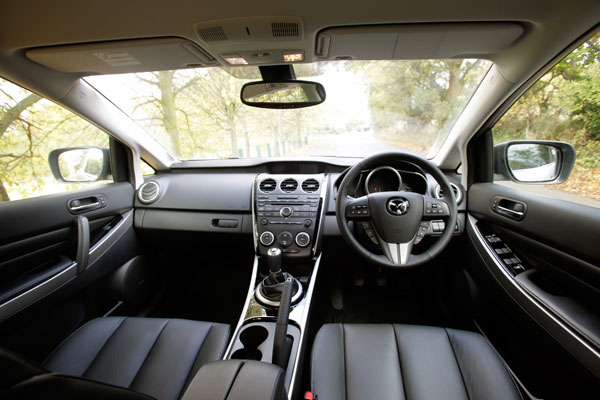 Cockpit
Inside, the design also takes ideas from Mazda’s sports cars, with a big rev counter and leather, three-spoke steering wheel and instrument cluster echoing the MX-5. The cockpit is designed to feel as though it wraps around the driver.

As this is really a practical, rather than a sporty vehicle, the five-passenger seat interior can quickly be turned into a load carrying area. The clever seating system works transforms the rear ones to a completely flat load surface with the flick of a switch.

I’m a Mazda fan. I owned two MX-6s for a total of six years. I wanted to buy the superb little Xedos, but wasn’t able to because of some arcane rules in my company car purchasing scheme which I won’t bore you with. Hats off to Mazda for righting a wrong in dumping petrol for diesel. But surely a huge vehicle like this cries out for an automatic gearbox. I suppose we shall have to wait for the next iteration to have that wrong righted. 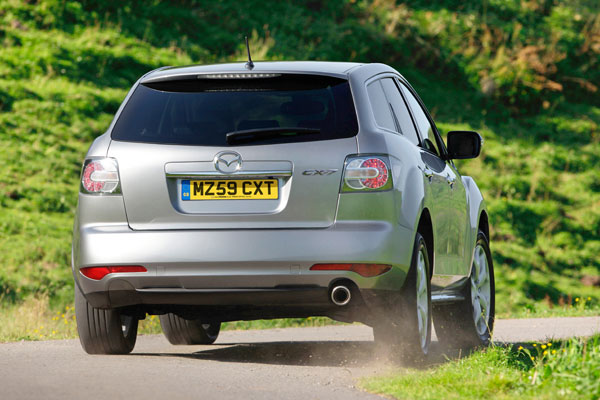