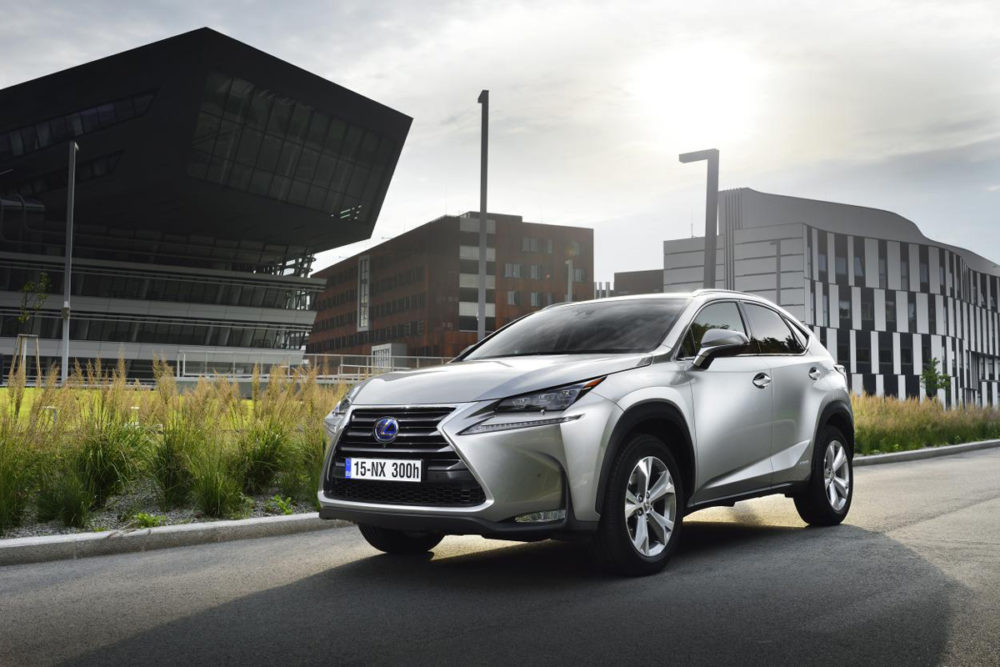 For – high quality build, terrific interior, notable looks.
Against – performance, unsophisticated engine/transmission noises.
**** out of 5 from £29,495

VIENNA, Austria – The new Lexus NX range is the lead dog in a new strategy for Toyota’s premium subsidiary – fill out the range with head-turning new models that can draw attention away from its rivals, and re-ignite languishing sales in Europe. 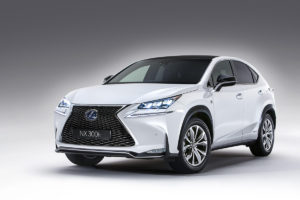 The NX is Lexus’s first compact SUV, and it says the 300h is the first hybrid in this sector. The NX is certainly not bland, an accusation thrown at Lexus in the past along with dull but worthy. The lines, creases and styling cues are certainly eye-catching, and are in contrast to previous Lexus models. The styling, apart from the controversial grille, is very appealing and attractive, and also sets the NX apart from its main rivals – the Audi Q5 and BMW X3 – which seem to embrace blandness, if not outright ugliness as if to say “our buyers are only concerned with what’s under the skin, and how it drives. The new Mercedes GLA certainly doesn’t come into the bland category, neither does the Land Rover Evoque, still selling like hot cakes despite being touted by an opinion splitter like Victoria Beckham.

The 300h is a hybrid. There will be a 2.0 litre supercharged 238 hp NX petrol only version next year; no diesel. There may well be hotter versions at some point. Surprisingly for a subsidiary of Toyota with its leading role in hybrid technology, there’s no plug-in hybrid version as yet. The 300h can be bought with four-wheel drive, with a second electric motor to drive the rear wheels, or just front-wheel drive. That’s the bottom of the range version costing £29,495. 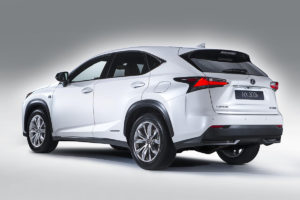 If you like the styling and step into the cabin you will be very impressed. The interior reeks of quality with very attractive leather and a marvellous cockpit with nifty switches and instruments which wrap all around you. There’s so much technology on tap, you will need to take a couple of hours out of your life to find out all about it if you buy one. Driving the car is pleasant, quiet and easy. But put your foot down, and the CVT (constantly variable automatic) makes some unexpectedly unsophisticated noises as the engine revs get ahead of the system. For normal people the top speed of 112 mph won’t be a problem, but this might holdback sales in Germany with its unlimited motorway speeds. The fuel consumption claim of an average 56.5 mpg-5.0 l/km looks hard to attain, but that doesn’t apply only to this manufacturer.

Big on gizmos
Lexus said the NX, with the German competition in mind, will give you an engaging and agile drive and a high level of ride comfort. The latter is certainly true. I’m not sure about the former two, or if it’s all that important to potential Lexus buyers.

The NX is big on gizmos, with a charging tray for mobile phones, Lexus Remote Touch Interface, which with its touch pad control sounds awesome and should make operation easy and intuitive. There’s a big head-up display. The car uses high tensile strength sheet steel combined with aluminium for increased rigidity. The NX 300h F Sport is available with an optional new-generation, Adaptive Variable Suspension (AVS), and it has more styling gimmicks inside and out. The AVS offers sharper driving dynamics, at least by Lexus standards. Entertainment is another bragging point for Lexus, and it offers a Mark Levinson Premium Sound System. The 300h has adaptive cruise control, lane keep assist, blind spot monitor, and rear cross traffic alert. The Pre-crash safety system and Adaptive cruise control are standard. 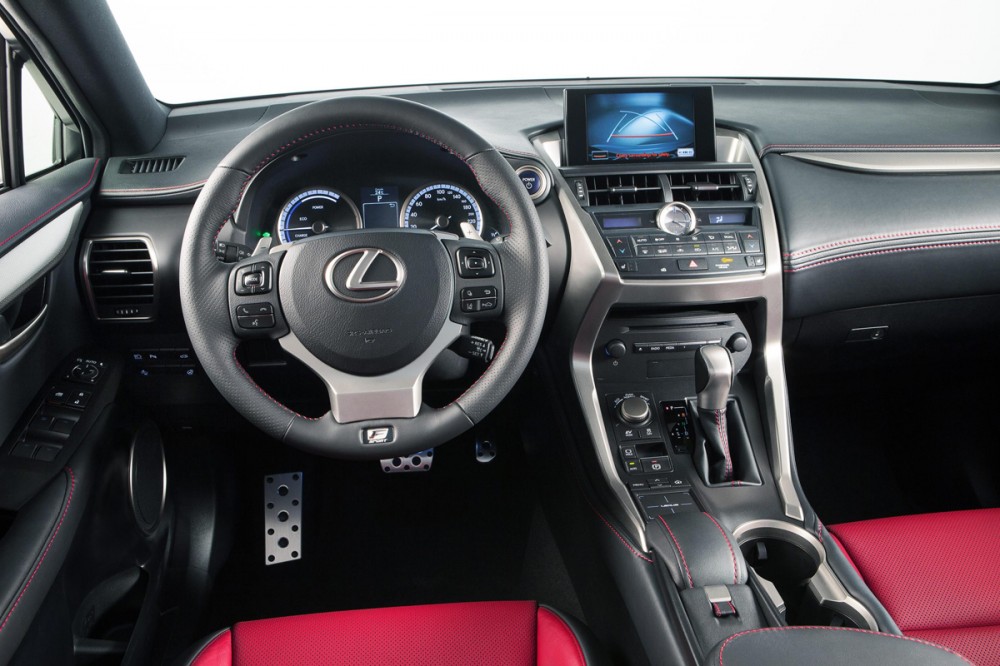 The range starts with the NX300h S, which has front wheel drive, £29,495, then proceeds to the SE AWD, Luxury, F Sport and Premier – £42,995. The top of the range includes the Mark Levinson sound system, and things like navigation, head-up display, and driver’s memory seat.

Formidable competitors
This compact premium SUV sector has some formidable competitors. With its experience with the Toyota Prius hybrids and plug-in ones, it’s surprising that Lexus doesn’t offer the same technology with the NX. Given that much the competition is about to embrace plug-ins, that’s a miss. The NX 300h may well win the contest for comfort and luxury but won’t do so well in the performance area. For well-heeled buyers, that probably won’t matter much. 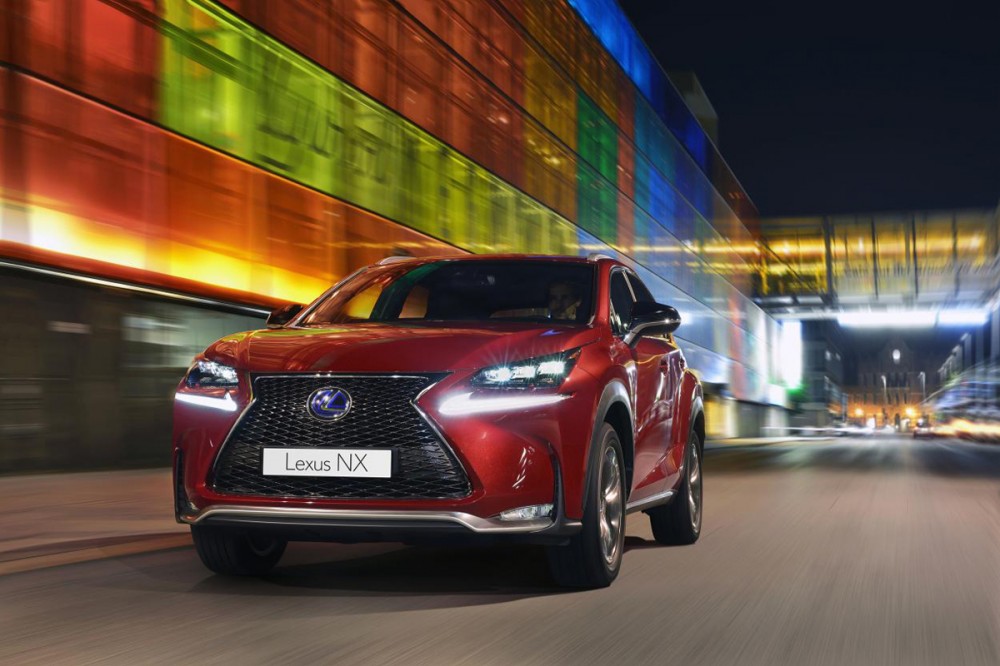