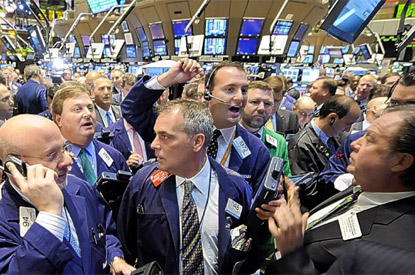 No Deaths, But Peugeot-Citroen, Fiat And Renault Will Struggle

Europeans plucky enough to ignore the crumbling economy and confident that their jobs are safe might find that a new car isn’t possible because banks just won’t lend them any money.

With Europe on the brink of a double dip recession, forecasters are scrambling to slash sales forecasts, but there is an added negative hanging over car manufacturers; the threat that even willing car buyers may be barred from the market because credit has dried up.

Last week’s summit meeting in Brussels to save the euro single currency zone failed to take any decisive action and the threat to banks remains. And as they struggle to rebuild balance sheets, consumers are being squeezed out.

According to Fitch Ratings, any disruption to the banking system would have two negative impacts.

“Firstly, it would hamper new car sales as end-customers would lack financing. Secondly, it would seriously hinder the ability of auto makers’ financial services units to refinance,” the U.S. ratings agency said in a report.

“Continuous access to credit and low interest rates are critical to support sales as the majority of vehicles are either leased or financed through a loan. Companies enjoy more robust liquidity in late 2011 than in later 2008 (when the last recession hit) but a sustained disruption in the banking system would be likely to weigh on new vehicle sales,” the report said.

“Our banks analysts expect E.U. banks to cut lending by up to €2.5 trillion ($3.3 trillion). Some may exit auto financing altogether. Given that 75 per cent of E.U. car sales are financed, captive finance companies (owned by car manufacturers) may need to step in to fill the gap. Replacing even a 10 per cent cut in non-captive lending would require €10 billion ($13.3 billion) in fresh funding at manufacturers,” said Morgan Stanley analyst Stuart Pearson in a report.

In the report, Pearson cut his forecast for West European car sales next year by 6.5 per cent. Last week, LMC Automotive, formerly J.D.Power, said sales in Western Europe will fall 5.1 per cent in 2012 to 12.15 million, and this after saying only a few weeks earlier that the decline next year would be a barely perceptible 1.5 per cent. The weakness in the car market is accelerating. Some analysts fear sales may dive if the euro zone unravels.

Excluding the Germans
As with most negative pronouncements about the European economy, you have to add “well, not including the Germans of course”, and the likes of Volkswagen, Europe’s biggest mass car maker, and premium producers like BMW and Mercedes already have strong financing subsidiaries of their own and are much better placed than most.

Peugeot-Citroen of France is also weak in this area, although not its compatriot Renault, presumably helped by the fact that the French government has a 15 per cent stake. GM Europe and Ford Europe are generally believed to be a cut above these French and Italian laggards, but not close to the Germans.

Although all car manufacturers operating in Europe will suffer in varying degrees, no companies are expected to fail, not least because in the previous downturn in 2008, many firms slashed costs and restructured. Morgan Stanley’s Pearson said all the car manufacturers it covers have ample liquidity.

Expose the weakest
“I don’t see any catastrophic failures, but problems with financing will expose the weakest of the companies like Peugeot-Citroen and Fiat,” Bailey said.

There are dangers from credit drying up.

“Unless pretty decisive action is taken we are stumbling into a credit crunch scenario again that will stop financial institutions lending. I don’t know what will happened to the euro zone, whether it hangs together or stumbles along or develops into a full-blown financial crisis. Even if we avoid ending up with the euro zone breaking up banks will be strained and have to recapitalize and be under pressure to fix balance sheets and cut back lending. Consumers will find it more difficult to fund purchases and that will have an impact on the scale of the market,” Bailey said.

After the 2008 downturn, many European governments introduced so-called cash for clunkers scrapping incentive schemes. Bailey doesn’t expect a repeat of that because of current austerity budgets which have slashed government spending.

More taxes to pay back massive debts
Professor Ferdinand Dudenhoeffer of the Center for Automotive Research (CAR) at the University of Duisberg-Essen in Germany doesn’t expect much of a problem from lack of financing. That might be linked to the fact that he is based in Germany. But he does see difficult times ahead for car sales because many Europeans will be paying more taxes to solve the problem of the euro and paying back the massive debts incurred in countries like Italy, Greece and Spain

“Private consumption will go down a little bit and the states have to pay their debts and therefore the economy will take longer to recover, but I don’t believe there will be a problem for financing cars. Banks are not the problem, but because of higher taxes and the economy going down consumers will have less money available,” Dudenhoeffer said.

Things will be pretty bad anyway.

“Next year in Western Europe we will see the worst demand for 18 years with 670,000 less cars sold than this year and it will take three or four years to get back to a more normal level of 2011, which was still not excellent,” Dudenhoeffer said.

Professor of Automotive Management at Buckingham University Peter Cooke said European bank balance restructuring still has some way to go. The euro zone was a crisis waiting to happen.

“The euro is a fair weather currency put together hastily without any strong intellectual debate or real arguments, on the assumption that the world would always go on getting better and better, but with no control over individual countries which sheltered behind Germany’s credit rating,” Cooke said.

No big failures
Some banks will be ending car finance, and although times will be hard, Cooke also didn’t expect any large scale failures among manufacturers.

Morgan Stanley’s Pearson said European manufacturers would make losses until 2014 and the huge problem of 30 per cent overcapacity among mass car makers would have to be addressed. He said this average figure cloaked huge differences, with VW factories running close to 85-90 per cent of capacity, Renault and GM’s Opel at 60 per cent and Fiat below 50 per cent.

“We would expect U.S. (GM and Ford Europe) and French manufacturers to continue to close, mothball, or scale back capacity. In particular we believe more is underway at Renault and Peugeot-Citroen than consensus thinks. We expect Renault to reduce Western European capacity by around 300,000 in 2012. Peugeot-Citroen will likely shutter at least 75,000 of capacity and may even take more radical action should economic conditions provide the rationale to justify a plant closure,” Pearson said.

(Don’t expect any action in France until after April and May’s Presidential elections.)

Much torment
This should lead to a more profitable 80 per cent capacity use level from 2014, he said.

There will be much torment between now and then, according to Fitch.

“The possibility of higher taxes, rising inflation and lower incomes could hit consumer confidence and purchasing power, leading to weaker and more a volatile trends. In particular, a recovery in sales is likely to curtailed by fiscal austerity measures implemented in several European countries, high unemployment and debt levels and the ongoing construction slump in some countries,” Fitch said.