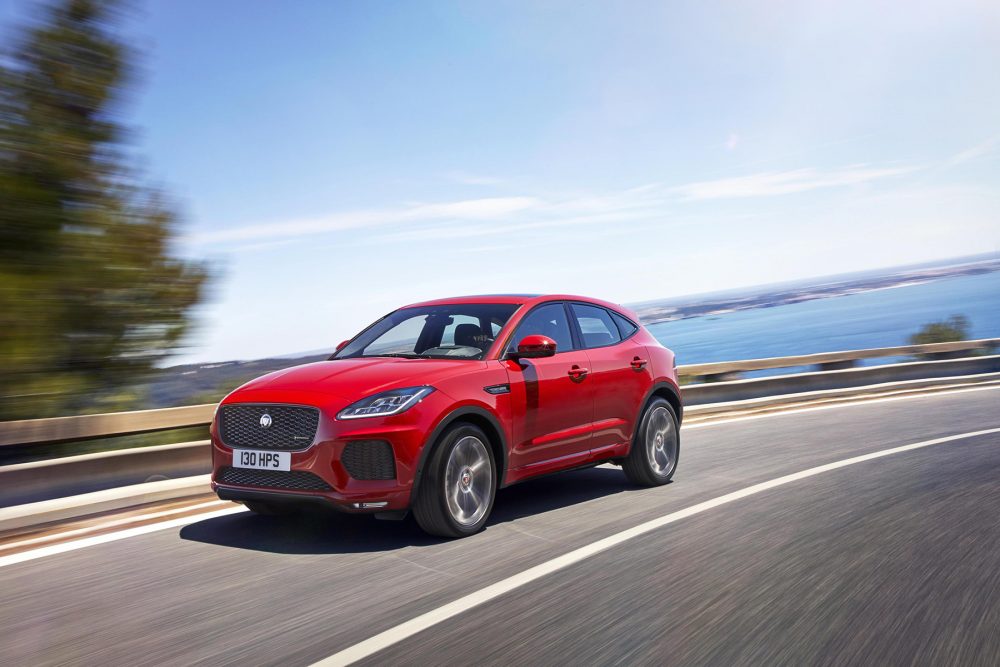 Jaguar E-Pace, Small For The U.S., Will Struggle.

“we expect the E-Pace to outsell the F-Pace in Europe – with up to 40,000 sales per annum – volumes are expected to be below half that for U.S.”

CLIVEDEN, Berkshire – Sales of the Jaguar’s smallest SUV, the new E-Pace, are getting under way in the U.S., and while initial sales forecasts have been lifted a bit, it will find it hard to compete there because it is priced a bit too close the bigger F-Pace.

Meanwhile global numbers for Jaguar, which with Land Rover is owned by Tata Motors of India, are being shaved by IHS Markit, which now sees sales of 265,300 next year, down from last year’s prediction of 270,800.

JLR is coming under pressure in Europe as diesel sales dive. In the first three months of 2018 in Western Europe JLR sales fell 16.5% to 61,259, according to the European Car Manufacturers Association.

Dave Sullivan, analyst at AutoPacific, said E-Pace U.S. sales will be under pressure from the bigger F-Pace.

“The F-Pace is only $3,000 more. The F-pace has great looks on the street and a price that is very competitive. The E-Pace is priced like the new (Infiniti) QX50 but lacks its interior space. It’s punching in the above price category. I think it’ll get people looking at Jaguar but they won’t walk out with one. Most luxury cars are leased here. The F-Pace should lease better than the E-Pace.” Sullivan said.

More optimistic
LMC-Auto is a bit more optimistic for the E-Pace globally, projecting sales of between 70,000 and 80,000 a year, similar to the F-Pace.

“While we expect the E-Pace to outsell the F-Pace in Europe – with up to 40,000 sales per annum – volumes are expected to be below half that for North America, owing to the market’s predisposition to larger SUVs. Its potential will also be limited, to some degree, by the increasingly competitive segment in which it operates, with competition coming from Audi’s Q3, BMW’s X1 and, in-house from Land Rover Discovery Sport and Evoque, with more models to enter the segment over the next few years,” LMC-Auto analyst Jonathan Poskitt said.

IHS Markit analyst Ian Fletcher said some of the changes in global forecasts were down to changes in launch timings, and a shift in market expectations.

“The impact of diesel will come in to that to some degree, particularly as at the moment it is only really high-specification gasoline engines offered in the Land Rover Discovery Sport, Range Rover Evoque and Jaguar E-Pace. However, the range of gasoline engines on these vehicles will broaden further over the next year or so there will be more low emission alternatives of this fuel-type available to offset customers’ misgivings against diesel,” Fletcher said.

Jaguar launched the E-Pace in Britain at this evocative country house dateline west of London, site of upper class sex shenanigans in the 1960s which included British government ministers and alleged Russian spies.

The E-Pace looks good and the front end shouts Jaguar at you with its fender and lights, but it is an SUV, with all the advantages of practicality and ride height and saying it looks like a sports car is stretching things a bit.

Like the wind
But Jaguar describes the new E-Pace as the “compact performance SUV with sports car looks”, and the couple of versions I drove did go like the wind, particularly the 295 hp HSE R-Dynamic which sounds awesome too, and the 250 was impressively quick.

Inside, the E-Pace is classy and well designed, with a cockpit feel as the front seats seem to have separate spaces, kept apart by a big grab handle for the passenger sited at knee height, like the F-Type two-seater. The trunk is comparatively large and on the versions I drove there was a push-button to operate the rear door. The rear passengers might feel a little cramped but there’s plenty of headroom.

On the road, the E-Pace smoothed out the bumps impeccably. The eight-speed auto box did a great job. Nine speeds are available at the top of the range. The power felt instantly available.

Meanwhile Jaguar is expected to introduce an SUV bigger than the F-Pace, perhaps the J-Pace which will likely appear in 2020 and will face down competition like the Porsche Cayenne.