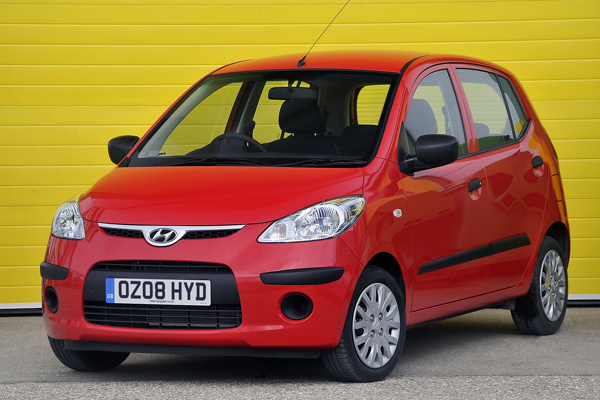 5-Year Unlimited Mileage Guarantee Is A Game Changer.
Fuel Economy, Use Of Resources Will Please Our Owners, Betters.

“we are all convinced that by driving our cars we are all guilty of destroying the planet, so I don’t suppose anyone will be objecting”

Our Lords and Masters in Brussels have decided that cars have had their day, at least for us little people not on the government payroll. These unelected commissars of the European Commission and their sandal-wearing acolytes and apologists in the European “Parliament” are determined to outlaw the freedom of movement we motorists have enjoyed for most of the last century. Cars, where allowed, must be utilitarian and consume the smallest possible amount of fuel (AND NO MORE) as you drive from A to B with your kith and kin and your stuff. If this doesn’t happen, the earth will warm and we will all die, so that’s reason enough to be getting on with. Any dissent will be dealt with severely. 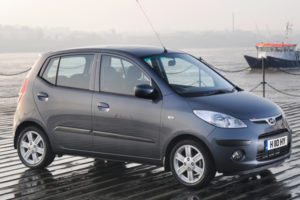 By 2015 at the latest, cars will have to achieve an average 51 mpg-5.5 l/kms. Anything remotely more extravagant will only be affordable by the super rich like Bill Gates or Madonna. While Brussels seeks to cajole the car manufacturers into designing cars which will be more like overweight skate boards with streamlining, national governments will be assailing us in a different way.

Here in Britain we see the Labour Party sneaking in a stealth road tax which will force older gas guzzlers off the road by this time next year. Given that some categories of road tax will be higher than the worth of the vehicle, this will also trash the value of the cars owned by the lowest earners in the land and force them to take the bus. Because more than 70 per cent of the cost of a gallon of petrol is made up of tax, it now costs more to fill up the average tank than the state pays pensioners for their weekly spending money. The rationale behind the move becomes clearer, doesn’t it?

Draconian, nay Nazi
Meanwhile local councils are doing their bit by making parking so expensive in shopping centres, and the regime to enforce it so draconian, so Nazi, that we will be grateful to wait around in the rain for an hour to hop on a bus. Given that we are all convinced that by driving our cars we are all guilty of destroying the planet, I don’t suppose anyone will be objecting.

And it’s just as well that this coincides with the launch of the Hyundai i10, which pretty much ticks all the boxers demanded by the environmentalists (for now) and shows that utilitarian motoring might not be all that bad, while we are still allowed to get behind the wheel that is. 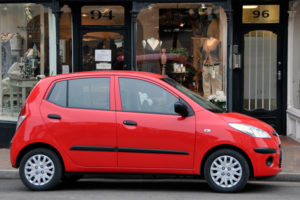 The i10 looks neat, seats 5 in relative comfort, and is guaranteed for 5 years with unlimited mileage. It has all the creature comforts that until recently, only the likes of Bill Gates and Madonna could afford. Even the cheapest models have air-conditioning, four opening windows with electric operation at the front, central locking, electric power steering, tinted glass, 14 inch wheels, body coloured bumpers and an integrated CD/MP3 stereo system. All models have anti-lock brakes and electronic brake-force distribution.

Keep the Gauleiters satisfied
The i10 is powered by a 66 bhp 1.1 litre petrol engine mated to either a five-speed manual gearbox or a 4-speed auto shifter.  Manual versions will achieve around 60 mpg-4.7 l/kms, according to Hyundai, which will keep the Gauleiters satisfied, for the time being. In Britain this means road tax is only £35 and the i10 will be exempt from London’s congestion charge. There are three versions – Classic, Comfort and Style. Prices start at £6,495-€8,250. The engine is a development of the motor which powers versions of the Hyundai Getz and the Amica.

I drove a Comfort Auto, which had driver, front passenger and side airbags, six speakers, keyless entry front fog lights and metallic paint, all for £8,220-€10,400. The interior was very smart, nicely put together with good quality components. The cabin felt well-designed and comfortable. Even the radio passed the test, with no hint of those annoying Asian units which had buttons so small and fiddly nobody over the age of 50 could read them. There was plenty of room in the back for six-footers. Headroom was cathedral-like. The boot is small, not surprisingly as this is a tiny car, but you could easily fold one of the rear seats flat to make space for your golf clubs and trolley. There was a neat lid on the floor of the boot which could cover up valuables. The rear shelf was a proper sliding affair; no sign of any hanging string-like straps which other cars in this cheap sector use. 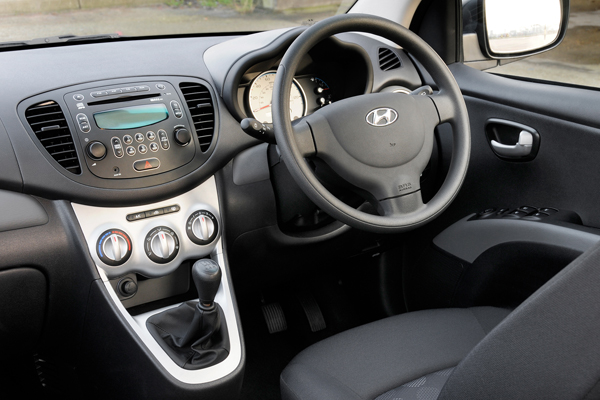 Steering wheel feels cheap
The car isn’t powerful but it had an adequate engine. It sounded a bit noisy under pressure, but not overly so. I covered a couple of hundred miles of motorway in the car and the experience was fine. This probably explains why I couldn’t get close to Hyundai’s claim of an average 48.7 mpg-5.8 l/kms. I managed only 38.7 mpg-7.3 l/kms. Handling was surprisingly good. The suspension flattened out the bumps with aplomb. The auto-box worked a treat. One negative was the cheap, rough feel of the steering wheel. Not only is this a constant negative, given that you are likely to be in contact with the steering wheel at all times, it is a surprising lack of attention to detail for a company like Hyundai which has all the other bases covered. Surely it can’t cost more than 50p to cover the steering wheel in some stuff which oozes quality? 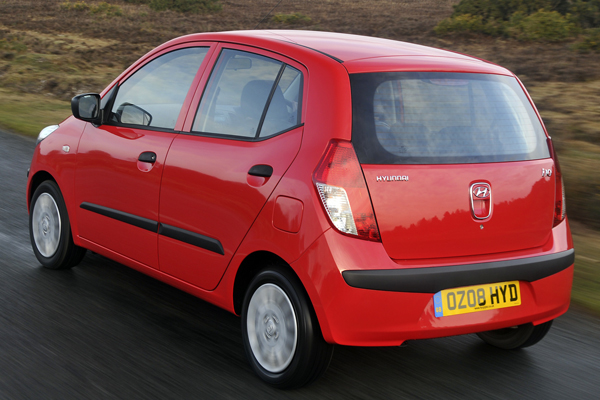 The i10 is a terrific little car with all the home comforts of a much bigger, irresponsible, climate-destroying machine. Only a selfish ego-maniac would demand more.