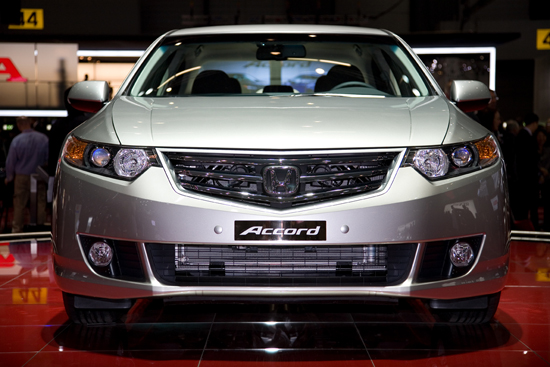 VIENNA, Austria – The new Honda Accord hits you right between the eyes.

The old design looked smart and elegant, with beautiful, economical lines; restraint was the watchword. The new one has dumped restraint and taken on board a modicum of bling, but not too much. It does look very striking, with handsome crease lines and a bold face. Even the rear end looks tasteful and all-of-a-piece. Honda’s little Civic, also a stunning design from many angles, looked tacky from the rear, as though the designers had simply run out of energy by the time they got to the back. I remember saying about the latest BMW 3 series design, that if only the designer (a certain Mr C Bangle) had stopped when he’d come close to the old Accord, the car would have been much more attractive. The BMW 3 Series suffers from fussiness induced by efforts not to look to much like the old Accord.

Potential customers will certainly be won over by the looks. When they open the door and get in, they will be even more impressed. The interior is simply stunning. Sure, the sheer number of switches and dials is a bit daunting, but all the basics are in the right places. The quality of design and components certainly reflects the premium feel that Honda is trying to generate. 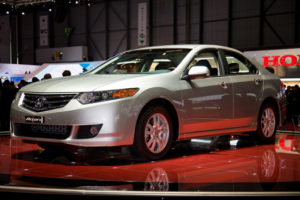 Switch on the engine, and doubts appear. While cruising, the car is quiet and purposeful. It feels terrific on the highway, accurately flicking in and out of the fast lane. On the twisty bits on the road alongside the Danube heading south from Vienna, the steering was light and accurate. The six-speed manual gear box was excellent. But the petrol engines – a 2.0 litre, 154 bhp and 2.4 litre 199 bhp – sound a bit gruff, reedy and noisy under hard acceleration. The smaller petrol engine performs minor miracles on the motorway, with quiet, untroubled cruising at well over legal limits. The 2.2 litre, 148 bhp diesel provides effortless power and has a deeper, more impressive sound. That’s the one to go for. Sure, noise isn’t the point but if, as Honda insists, you want to carry on the illusion that you couldn’t tell the difference between the Accord or an Audi A4 or BMW 3-Series, the comparisons begin to fall down in this department. And Honda is quite upfront about trying to create this feeling, without actually offering the performance.

Honda apparently has no plans to introduce a more powerful version; even though a 3.5 V6 is available from the top of the range Legend. That surely would add lustre to the range. No mention either of a hybrid motor.

Honda also launched the Accord Tourer, otherwise known as the estate car version, and that looks the business too. The old one always looked like a design afterthought, appearing to be too big for its wheelbase. But the new one is strikingly handsome, although the improved looks cut back on some aspects of practicality.

Just to keep the Germans on their toes, the Accord bristles with safety technology including the Collision Mitigation Braking System (CMBS), Lane Keeping Assist System (LKAS), and Adaptive Cruise Control.  Collision Mitigation detects an imminent impact by squawking and showing a brake warning. If that doesn’t work the alarm is given again and the seat-belts tighten. If prompt action isn’t taken the brakes are applied. 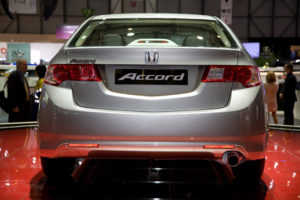 Lane assistance recognises which lane is being used and if the car wanders, the system beeps and if ignored, self-steers to maintain the lane. Adaptive Cruise Control keeps a safe distance from the car in front. When you move out of the lane, the cruise control speeds up again to the setting you have chosen. I can’t tell you how this works because the sat-nav on my test car led me on a slow detour through the outskirts of Vienna, and the test track was closed by the time I arrived. 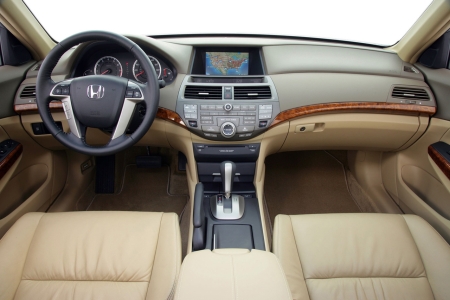 Illusion of performance
How to choose when the competition is so formidable, including the Audi A4, BMW 3-Series, Mercedes C class, VW Passat, Mazda 6, Ford Mondeo, and Lexus LS? For my purposes, I’d like a powerful, automatic diesel (like my current BMW 330d) so that eliminates the Honda and only leaves the three premium Germans. But if Honda is right and the main buyers in this segment only want the illusion of performance, the impressive looks, interior and ride of the Accord make it a formidable competitor.