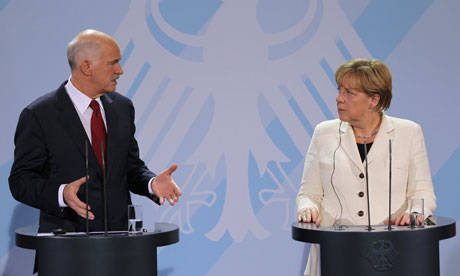 Even If  Some Countries Break Away, Solid Core Will Remain
At Detroit Show, Cadillac Hopes ATS Can Challenge BNW 3

Cadillac’s new little ATS sedan, on show for the first time at the Detroit Auto Show, needs to be at least as good as its fellow debutant and direct rival from Germany the BMW 3 Series, because it’s not about to get a free pricing lunch from a breakup of the euro zone.

You only have to consider the calamitous consequences for its big auto companies to realise that Germany will move heaven and earth to avoid going back to the Deutschemark any time soon. The European common currency, currently “celebrating” its 10th anniversary, allows Germany to sell its products much more cheaply than if it used its old currency, the mark.

The financial crisis in Europe, caused by huge government overspending in member states like Greece, Italy, Spain, Portugal and Ireland, has led to speculation that the euro would break apart. If Germany then reverted to its former currency, the prices of its BMWs, Mercedes, Audis and Porsches on sale in America would shoot higher and give a big boost to its competitors in the U.S. luxury market like GM’s Cadillac, Ford’s Lincoln, Honda’s Acura, Nissan’s Infiniti Toyota’s Lexus, and Tata of India’s Jaguar Land Rover.

“The nightmare for Germany’s premium car manufacturers is that Europe’s financial crisis kills the euro single currency zone and forces a return to its traditional currency, pricing their cars out of markets like the U.S. and destroying profits. If the Deutschemark was reinstated, it would be worth anything from 20 to 80 per cent more than the euro, and would wipe out profit margins for the likes of BMW, Audi, Mercedes and Porsche,” said Max Warburton, auto analyst with Bernstein Research in a recent report.

But any U.S. or Japanese premium car manufacturer dreaming that the German competition will be forced out of the market by uncompetitive prices needs to jolt back to reality. If anything, German prices will become cheaper (or profits improved) as the euro currency weakens further in 2012.

According to IHS Global Insight senior economist and German expert Timo Klein there is a 40 per cent chance that Greece will leave the euro zone, but that would focus the minds of European governments to take tough measures to prop the single currency up.

“The odds of an outright Eurozone meltdown is only around five per cent and even in that event a core Eurozone area would remain encompassing at least Germany, Austria, Netherlands, Luxembourg, Finland and most likely France. Germany returning unilaterally to the mark remains extremely unlikely, as this would not only go against Germany’s economic interests but also its political interests. A collapse of the Eurozone would most likely also lead to major damage to the European Common Market, revive nationalism, and generally unwind decades of progress in international European relations,” Klein said.

Quality not currency
Klein also makes the point that German auto profits are not dependent on euro currency weakness, but on success based on quality despite unfavorable currency movements. Tough measures have been taken since the previous economic downturn to take costs out.

“German car makers would certainly suffer severely but not go bankrupt or anything like this (should the unthinkable happen, the return of the mark),” Klein said.

Professor Ferdinand Dudenhoeffer of the Center for Automotive Research (CAR) at the University of Duisberg-Essen agrees that Germany will not only remain in the eurozone, but retain the advantage of a competitive exchange rate.

“Possibly Greece will step outside but I don’t think France, Spain or Italy will despite big problems. German car manufacturers will still have the advantage of a favorable exchange rate,” Dudenhoeffer said.

And despite nifty new products at the Detroit show like the Cadillac ATS, the Acura ILX, the Lincoln MKS and MKZ concept, the Germans will retain their premium sector lead, although Lexus is recovering.

Only innovators need apply
CAR’s Dudenhoeffer says the leaders of the premium sector in the U.S. are those companies which can excite buyers with new innovations.

“Acura finds this difficult, but Lexus is much more of a competitor, with Infiniti a little bit in between. (VW’s) Audi isn’t keeping up with innovation. They are just nice bodies with different body styles. Look at hybrids and electric cars and new materials it’s not Audi which is doing this. The first (German) hybrid in the U.S. is Porsche not Audi. Look at new materials – carbon structures is BMW not Audi. Look at plug-ins, nothing from Audi. Innovation is the key in the premium sector,” Dudenhoeffer said.

Dudenhoeffer isn’t much impressed by Cadillac either.

“Cadillac is some kind of an old brand and you don’t see the innovations which give life to sales in that segment,” he said.

Eyes on America because of Europe weakness
There has been speculation that because European car sales will drop sharply in 2012, the Germans would make a big effort to divert more resources to U.S. sales.

Tim Urquhart, analyst with IHS Automotive, doesn’t expect this to make much difference because manufacturers are worried that the U.S. recovery might not last.

“As European sales drop off, there might be some effort to shift resources to the U.S., but there are some pretty big concerns about the U.S. economy as well and there could be a drop off towards the end of 2012. They won’t be moving hugely to the U.S., because uncertainty might unravel in both markets but it’s a lot more likely that the U.S. market will retain its integrity. There will some small juggling, but not a huge transfer to the U.S.,” Urquhart said.

BMW has a factory in Spartanburg, South Carolina, Mercedes has one in Tuscaloosa, Alabama, and VW recently opened a plant in Chattanooga, Tennessee where it might make Audis one day.

Urquhart doesn’t expect any new challengers to make much of an impact on the Germans in the U.S.

“It’s all about perceived quality and styling, a magic cocktail of brand image, design and performance. It’s more about high end technology, fuel saving lower emissions, hybrids and plug-ins. Infiniti has struggled to carve out a niche there, and there’s still a long way to go to beat the Germans. Ford had big plans for Lincoln but had its work cut out to make inroads,” Urquhart said.

Professor David Bailey of the Coventry University Business School doesn’t see any great challenge to the Germans, despite the success of Lexus in the U.S. which it hasn’t come close to matching in Europe.

ATS looks are key
“German success is ultimately down to the package they offer. Not only very attractive cars that are great to drive but the quality which the competition hasn’t been able to match,” said Bailey.

Bailey says the BMW 3 Series segment is the most competitive sector of the market and very difficult for newcomers. GM has kept a low profile about Cadillac’s new ATS, releasing only tease pictures, but has published some details about its specification.

Bearing in mind the iron law that premium cars need impressive innovation, maybe the ATS’s amazing-sounding two liter, four-cylinder engine which can produce 270 hp compared with a similar BMW engine’s 245 hp may excite American buyers. Given that BMW’s new body design for the 3 Series is understated to say the least, the ATS’s first job is to turn heads. We will find out when the covers come off at the Detroit Show if Cadillac has succeeded.