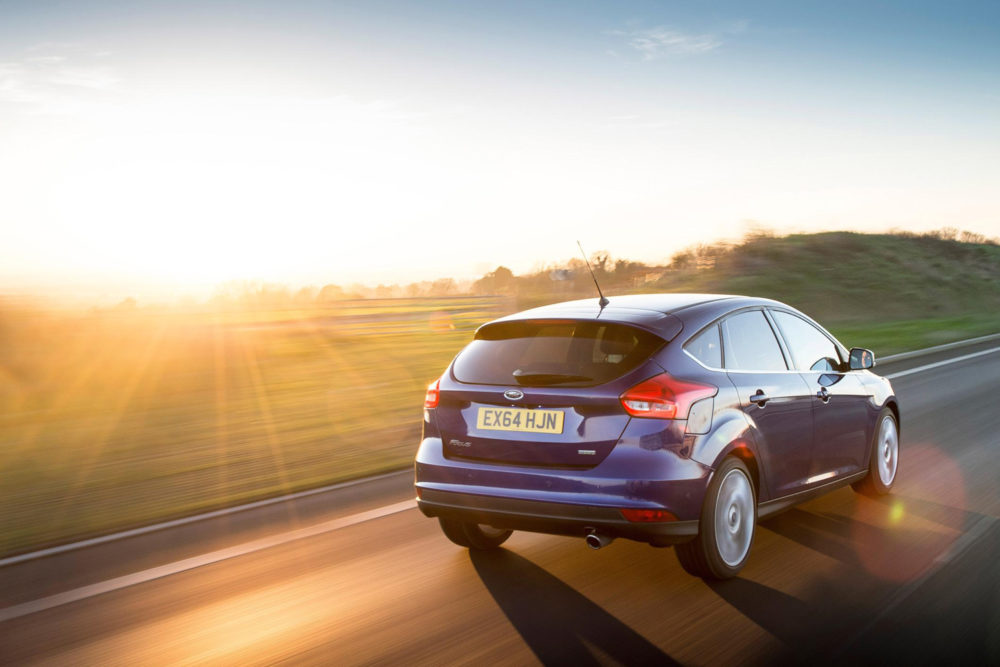 For – looks good, quality high, technology impressive, drives well.
Against – so do lots of others.
Rating – **** out of 5

The front end uses the “Aston Martin“ lookalike grille adopted by the little Fiesta and bigger Mondeo, which in turn it inherited from the U.S. Ford Fusion, the American version of the Mondeo. 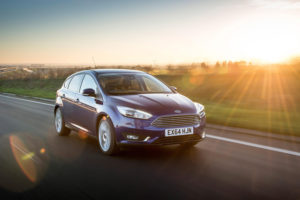 Ford said it has upgraded the fuel efficiency of its range of engines by up to 19 per cent. That’s 19 per cent better than the fuel consumption figures Ford supplies to the E.U., so you can safely ignore that.

Ford is especially proud of its internet connectivity, and technological aids to driving.

The Focus is available as a four-door, five-door, and estate car. Inside, the new black satin trim and chrome detailing contributes to a cleaner, more modern look. High quality indeed. The redesigned centre storage console offers more space as well as a new sliding, integrated armrest.

“We’ve responded to a clear customer desire for more simplicity inside the car, creating a clearer visual connection between the key components and significantly reducing the number of buttons in the cabin,” Ford said.

Looking at this list of engines – 14 – does suggest to me that this is an area which could use some rationalisation. Do we really need this much choice? Would prices come down a bit if this was halved? 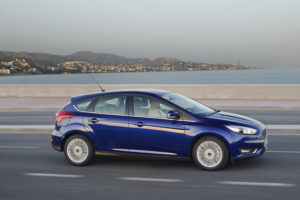 The new Focus certainly handles and steers well. Ford said its engineers have delivered a more solid, responsive and connected-to-the-road feel by increasing the structural stiffness at the front, revising the suspension, increasing lateral stiffness of “steering-relevant” suspension bushes, and retuning the shock absorbers.

The Electric Power Assisted Steering has been improved. One of the many technology options includes Enhanced Transitional Stability, which monitors vehicle speed and the driver’s steering input to predict a loss of traction before it actually happens and trigger Electronic Stability Control sooner to enhance safety.

There are five and six speed manual gearboxes and automatics too.

Over the top
A shade over the top is the voice control system which if you say “I’m hungry” will bring up a list of local restaurants, which you can then get directions to via the navigation system. I can almost guarantee this will never be used. 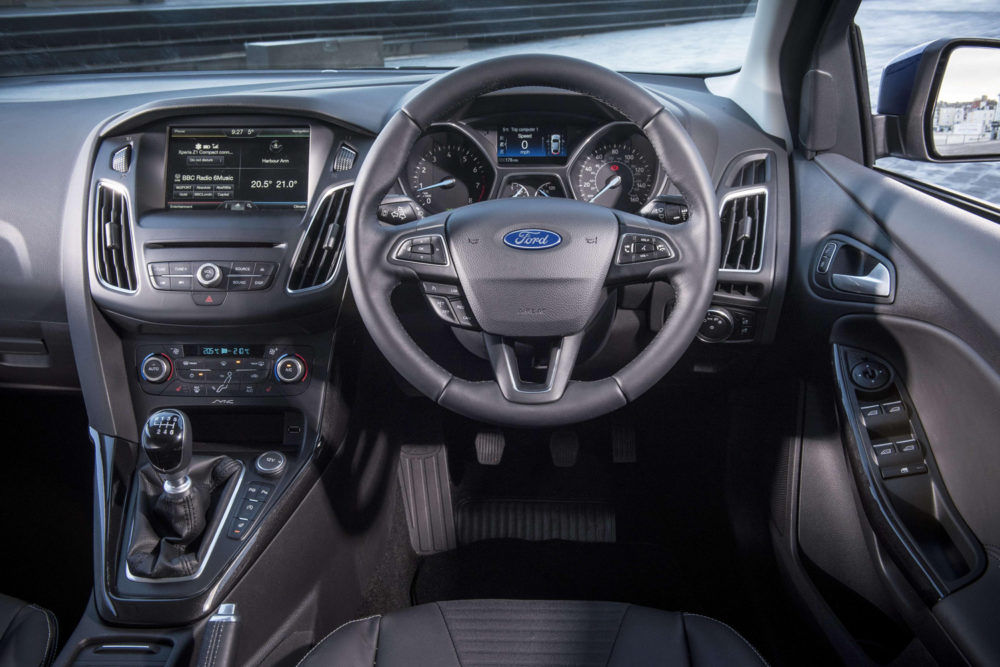 The new Focus also has Perpendicular Parking, a new hands-free parking technology that helps drivers reverse into spaces alongside other cars. The previous Focus introduced parallel parking aid Active Park Assist. Again, this is impressive technology, but does anyone every actually use it?

Ford also has improved its Active City Stop collision avoidance system, which uses sensors at the front of the vehicle to look for stationary objects in the road ahead and pre-charges the brakes if the vehicle is approaching an object too quickly. If the driver still does not respond, the system reduces engine torque and automatically applies the brakes to reduce the impact of collisions. Active City Stop now operates at speeds of up to 30 mph, increased from 20 mph. There’s Adaptive Cruise Control too.

The Focus is equipped with Ford’s MyKey technology, which enables owners to programme a key – usually for younger drivers – that restricts the top speed, reduces the maximum volume of the audio system, and can disable it altogether if driver and passengers are not using safety belts.

One every 90 seconds
Ford first launched the Focus in 1998 and since then more than 12 million have been sold worldwide, including 6.9 million in Europe – where Ford builds a new Focus every 90 seconds. To meet growing customer demand for the Focus, which is sold in more than 140 markets, Ford has now ramped up capacity worldwide to build the car in eight plants on four continents. Factories in Germany, the U.S., Russia, China, Thailand, Vietnam, Taiwan and Argentina have a combined capacity to produce more than 1.5 million Focus vehicles annually.

You can’t argue with the quality and amazing high technology of this new Ford. If you buy a fully equipped model it’s hard to see how this could be bettered even by the German premium brands. But such is the overall quality now on offer by Europe’s car manufacturers, this still doesn’t really differentiate the Focus from the rest of the competition.

If you are in the market for a small family car you might just as well use a map to make your mind up for you. Go to the nearest dealer and buy there. The quality and the technology is pretty uniform across the sector. Having said that, and trying to follow my own advice, I find that the nearest dealer is Fiat, which doesn’t have a candidate in this segment. Then there’s Suzuki, ditto. Audi is the next nearest. I suppose I must buy an A3. Pricey, but could do worse. 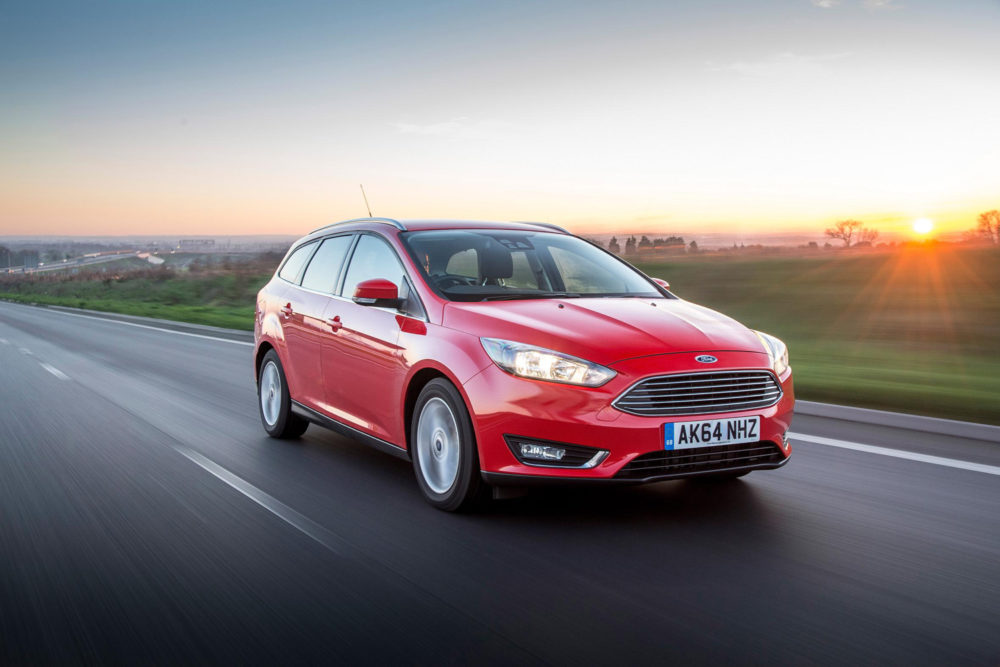 Europe’s Sales Rally Will Stall In 2015 As Stagnation Returns.
Electric Car Sales Rise, But Too Slowly To Meet German Targets