Fiat Adds Convertible To The 500 Range 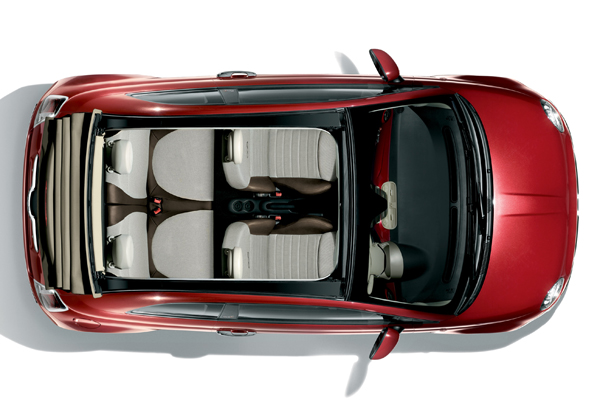 POOLE, Dorset – This non-descript port town on the south-west coast of England will almost get its 3 weeks of fame in 2012 when the London Olympic sailing event is staged down the coast at Weymouth. Last month it had a glimpse of glory, when Fiat of Italy launched its new 500 C (for convertible) here.

The 500 and its derivatives, the souped up little sibling the Abarth, the new 500 C and perhaps eventually a small SUV and station wagon are currently manufactured in Tychy, Poland, in a joint venture with Ford. Ford’s little city car the Ka is produced on the same production line using common components, although you’d never guess that from the outward appearance of the cars. Weirdly, the Ka seems to have much more room in the back than the 500, although it is basically the same er, car. The Fiat Panda, a cheaper, less stylish, more practical version of the 500, also rolls down the same line. 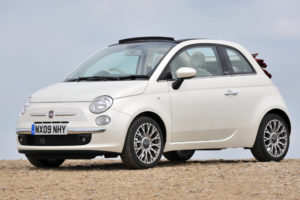 I was expecting the convertible 500 to look like a typical ragtop, with the side glass area disappearing when the fabric roof was pushed back. But the 500 C cleverly uses what amounts to a giant canvass sunroof, which makes it look just like the old iconic Roman Holiday 500 from the 1950s. The canvass slides back leaving the side windows and roof frames intact. Usually convertible versions of cars are sent off to a specialist coachbuilder. This design means the C versions can be made at the same factory.

Semi-automatic
Buyers of the 500 C can choose a 1.2 litre 69 bhp, 1.4 litre 100 bhp petrol engine or a 1.3 litre 75 bhp diesel, with a 5 or 6-speed manual gearbox. I’d go for the diesel. There’s a semi-automatic gearbox choice for the petrol motors. This car is seriously small – 139.6 inches long, or 33 inches longer than the miniscule Smart city car, but unlike the Smart it does have room in the back for two, small, people. 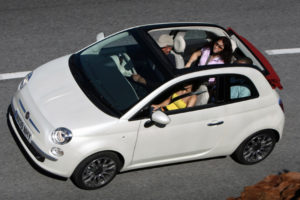 To open the roof, you either press a button next to the interior roof light, or use the car’s remote control key fob. You can open or close the roof at speeds up to 37 mph (60 km/h). Press the button for at least half a second and the roof peels back to the top of the rear window. From the side this makes the car look as if it has a spoiler at the back. Press the button again and the roof folds back completely. When using the remote, the roof can only be opened to the “spoiler” position. I don’t know why. When the roof is back as far as it can go, it will position itself just above the boot, so it won’t block loading.

If you think this car looks cute from the outside, which it does, the interior will impress you even more. One of the versions I drove had a white steering wheel, a white surrounded dial binnacle, and white facing to the audio and air conditioning controls. Very trendy-looking, marred perhaps by the black gear change lever. Shouldn’t that be white too? The basic facia was in red metal. Smart. Or you could choose aluminium. The upholstery across the range was terrific quality. 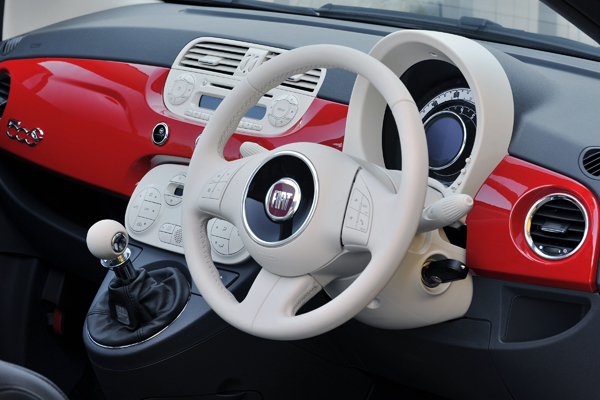 For a car this small, any meeting with a larger vehicle won’t have pleasant consequences, but Fiat does all it can to mitigate accidents with seven standard airbags – two front, two window, two side and one knee – and there’s ABS, EBD, and ESP, (I don’t have to explain do I?) plus a hill holder system and assistance for braking in emergencies. The top of the range models have Xenon headlights.

Pop or Lounge
The range starts with the Pop version, which includes the alphabet soup of safety stuff too. It has manual climate control (that’s a pretend air-con system where you just fiddle with the heating controls), radio/CD/MP3, central locking and electric windows, and remote key fob. The Lounge version has chrome trimmings, automatic climate control, fog light and parking sensors, not to mention the Blue&Me sat-nav and phone system. You can pay more for Xenon lights, leather interior, and bigger wheels. There’s a long list of stuff you can add on to customise your 500C, including a Humanoid sticker at £160, or a Zip sticker for £150. I have no idea what they are. 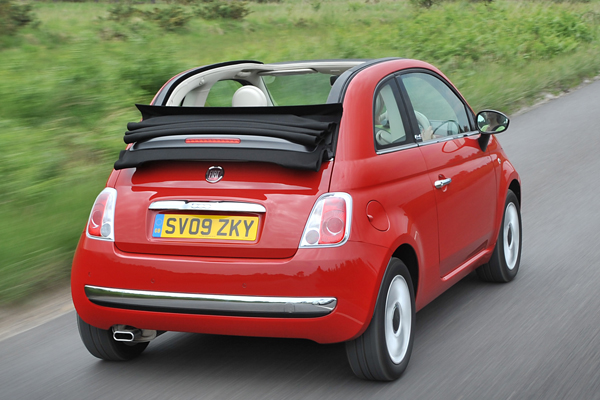 Driving the car around the Dorset-Devon border was fun. The 1.3 diesel had plenty of poke, while the 1.2 petrol felt a bit gutless. The gearbox and handling were just fine, but the suspension a shade on the hard side. This will of course be a girlie automobile, or maybe a rich girlie because prices are steep for such a small car. The entry level Pop starts at £11,300 on the road, with the 1.3 Lounge topping out at £14,100, before you’ve added on your personal statement. 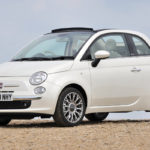 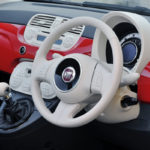 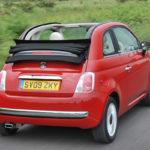 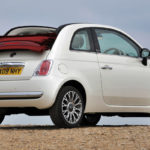 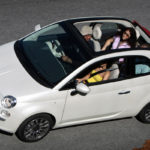 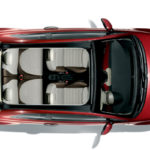