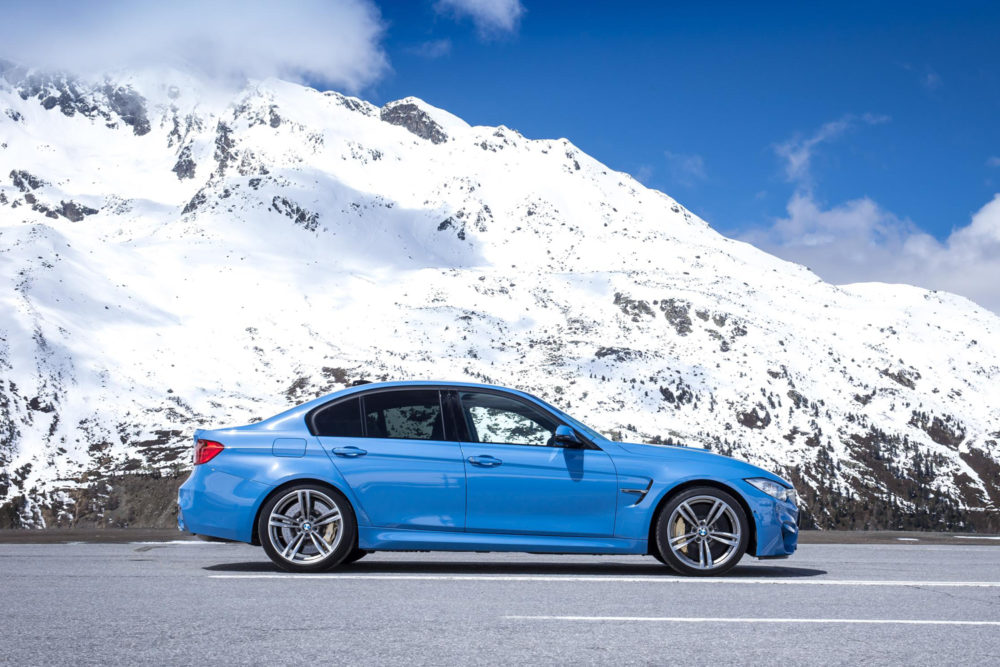 Rocket Ship For The CO2 Age.

For – just about as fast as it gets, civilised.
Against – hard to justify expense for impossible performance.
£56,175

These new iterations of the top-of-the-range 3-series saloon and 4-series coupe go for smaller engines and twin turbochargers to wring out mind-boggling amounts of performance, while new materials like carbon fibre, aluminium and magnesium cut weight and allow fuel consumption to be significantly improved too. 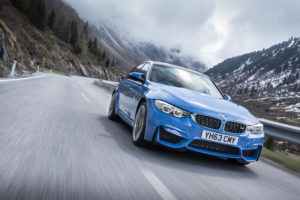 BMW says there’s an extensive level of standard equipment and given that prices start at £56,175 for the M3 Saloon and £56,635 for the M4 Coupé, quite right too. This is the first time there has been individual model names; before it was the M3 and M3 coupe.

BMW has dumped the big V8 of the old models and opted for a twin-turbocharged engine, with a high-revving, 3.0-litre six-cylinder in-line engine producing 431hp. That’s 10 hp more than the old one. Peak torque has been increased by about 40 per cent to 550 Nm. The new engine cuts fuel consumption by 25 per cent. Over 80kgs has been cut from the weight with use of lightweight materials. Both models feature a carbon-fibre reinforced plastic roof.

The sprint from a standing start to 60 mph improves to 3.9 seconds from 4.6 seconds. Top speed is limited to 155 mph until you get to the race-track, where you can switch off speed limiters and turn on “launch-control to maximise acceleration from a standing start. There’s a seven speed automatic gearbox or a six-speed manual (which doesn’t have launch control). You can choose from three suspension settings, Comfort, Sport and Sport+, otherwise known as Comfort, Not very comfortable or really uncomfortable.

Competition
Competitors include the 6.2 litre V8 Mercedes C63 AMG Coupe and the 4.2 litre V8 Audi RS5 Coupe. Non-German pretenders include the Jaguar F-type. Fiat Chrysler’s Maserati might come up with a performance version of its new Ghibli, and Toyotas Lexus could join the party.

Every time I get behind the wheel of new fantasy, rocket ships like these I wonder just how much longer they can exist. 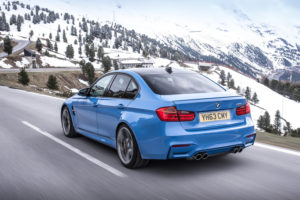 After all, governments in Europe and the U.S. are imposing ever-tougher fuel consumption laws in the name of saving the planet, while the performance offered by cars like these, loosely based on the standard 3-series sedan and 4-series coupe, are simply not compatible with driving on regular roads.

But companies like BMW are spending prodigious sums of money to improve fuel consumption now on machines like these by taking out weight and using the latest technology to turbo-charge smaller engines to produce more power than older bigger ones using much less fuel. Electrification beckons in the future.

Lower fuel laws
European and U.S. laws have been designed to force vehicle manufacturers to produce lower fuel consumption across the average of their whole fleet of vehicles. That allows BMW and its ilk to make a small amount of high performance cars without impinging too much on the overall average, and given that the starting price of a BMW M3 sedan is so high, that will limit sales anyway to the mainly race-track addicted, enthusiast car buyer.

At the launch near Innsbruck, Austria, BMW said it expects to embrace plug-in hybrid technology for cars in its “M” high-performance brand at some point, but had no concrete plans currently.

According to Tim Urquhart, analyst with IHS Automotive, there will be room for cars like these way into the foreseeable future, not least because sales are relatively small anyway.

“These cars are still small beans in volume terms, and there definitely will be space for them in the market, but they will be conceived in a different way, eventually with a hybrid component. People still want emotional, high-performance cars,” Urquhart said.

Urquhart estimates peak engine production for M3 and M4s at under 16,000 a year.

“With the BMW M3 and M4 there’s been a big change in philosophy, with huge gains in efficiency with about 25 per cent improvement in fuel consumption over the old models. The old M3 was notorious for its hunger for fuel,” Urquhart said. 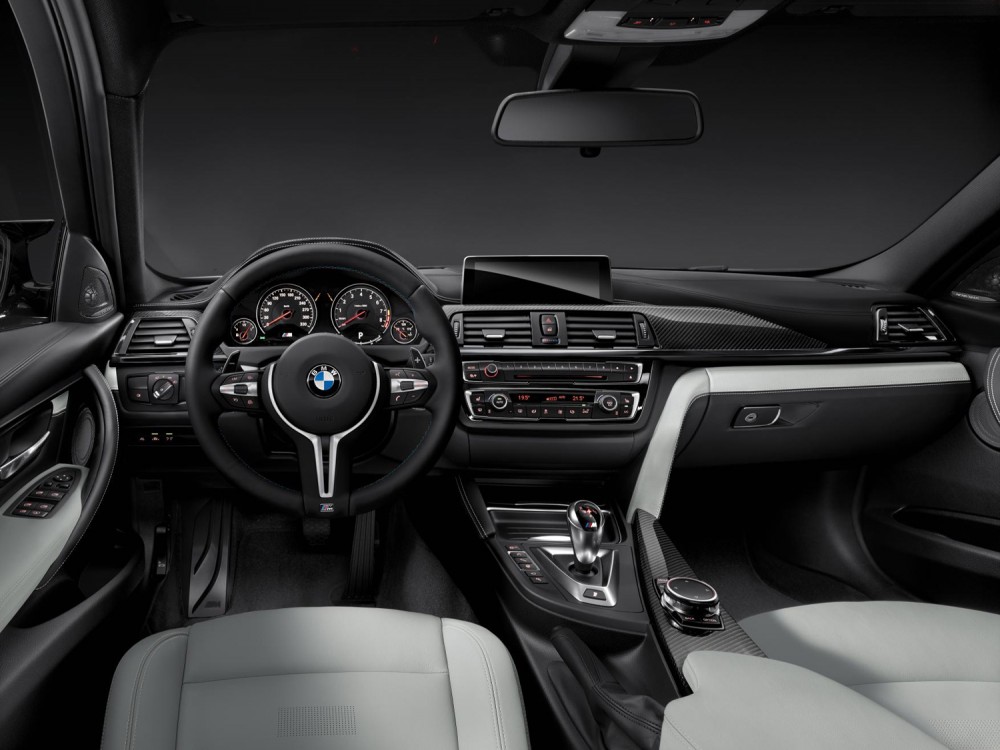 “The flagship models of the three/four series lines will continue to reinforce the image that BMW portrays as a maker of sporty, driver-focussed vehicles. While only relatively few buy the M3/M4, those vehicles remaining in the three/four series product line-up send positive messages that filter through to the rest of range. The equivalent Audi and Mercedes-Benz derivatives will probably be the main focus of these BMWs, but the price-point does mean that they could draw in other customers looking potentially at larger premiums,” Poskitt said.

And it’s U.S. enthusiasts that will determine the success of the M3/M4, IHS Auto’s Urquhart said.

“There’s a huge (comparative) volume in the U.S. where there’s a hard core of enthusiasts who love the brand and are very passionate about it; there’s still a manual (gearbox) version for the U.S. These new models are a very different character to the old ones and it remains to be seen if they will excite customers as much as the previous generation did,” Urquhart said.

So these new M3 models are very impressive with their engine and weight saving technology. But it gets ever harder to justify consuming huge amounts of investment to produce a performance you can never use, just to brag that you’re marginally better than Audi or Mercedes. I suppose the bottom line is that these machines are used on the race-track, so they need to be lightening fast, and that if you can afford it, why not, given that you aren’t doing anyone else any harm. 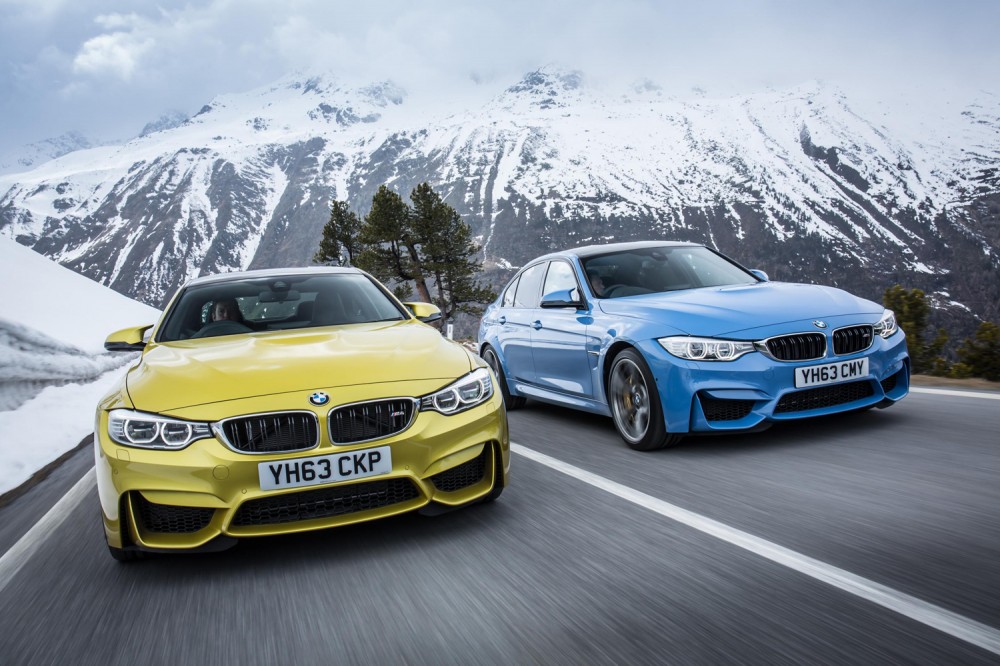